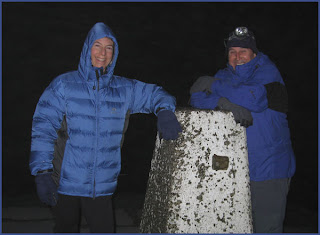 It’s the way traditions develop. Go on a particular outing that is enjoyed by all, and then make similar plans for the same time next year. The Christmas Walk on 9 December was one of those traditions. It is however a far smaller, more select, gathering that assembles at 7.30 on a December evening for our final evening walk of the year, which, tradition now dictates, is up Shutlingsloe, a mere 270 metre ascent from Trentabank to the 506 metre summit high above the Cheshire plain. This is the second highest peak in Cheshire (below Shining Tor) and in daylight its distinctive prominence is visible from afar.
Tonight Andrew joined The Dishy Pharmacist and me for the brisk stroll up and down the hill by the shortest route. There was a nip in the air and the icy paths were frosted over, the temperature having not really risen above freezing for quite a few days. Where we emerged from the shelter of the trees of Macclesfield Forest the wind felt strong and cold, but beyond that spot it eased and extra windproofs weren’t needed, though you can see from the summit photo that the other two were well covered up. The ‘Pennine Way’ type stone slabs leading to the summit were actually very slippery, so we walked beside them at times, but made good time and allowed ourselves a break on the summit, admiring the view, which sadly was beyond my limited technological skills to record. The moonlight was bright, with good reflections from the frost, so torches were not needed, though Andrew used one on descent to help him identify the least slippery route.
After this most enjoyable little excursion – all of 5 km and 270 metres ascent, it was an added pleasure to adjourn by 9 pm to the Leather’s Smithy for refreshments in front of the roaring fire and a ‘Famous Five’ reunion with Richard and Jenny (Jenny’s fear of the dark had overcome her burning desire to come on the walk, this year!)
Posted by Phreerunner at 17:14