The Optimistic Report
A fine morning saw us quickly out of the local DOC office, armed with hut passes and a map for a two day adventure in Nelson Lakes National Park.
We strolled off from the Mt Robert car park (880m) at 9am and headed up a lovely zigzag path in and out of gorgeous birch forest, with Tomtits and Bellbirds singing merrily as we rose gently up the first 400m to Bushedge Shelter - a bit like a stalkers' lunch hut. Still enjoyed fine panoramic views as the mist came and went. 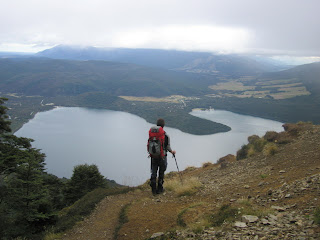 We soon passed Relax Shelter (1425m), also well named, where we relaxed with some chocolate for a while. Beyond this spot we gained the broad crest of 'Bob' ridge and followed the well-marked path as it continued over the crinkles of this long ridge. A heavily laden couple with 9 days food overhauled us here, but we passed with when an extra layer was needed and next saw them at the end of the walk. Meanwhile we skipped along, enjoying occasional glimpses of views, as the ridge became narrower and rockier. It was similar to the Glyders but sharper and three times as long. We spend quite some time around the 1800m mark before descending joyfully to the magnificently placed Angelus Hut besuide Lake Angelus. It was 2pm, time for a late lunch and a debate as to whether to continue. The rain got heavier (we actually got better views then) and the company appeared good, especially the wood-burning stove which was most comforting, so we stayed, along with Shannon and Scott, the heavily laden pair from Alaska (Scott has a magnificent red beard, perhaps he is training to be John Muir II), a family with their delighful 1-year old, Ellie, some Australians amongst whom Bruce was very knowledgable and informative, some Californians living over here and a couple of guys from Wellington. 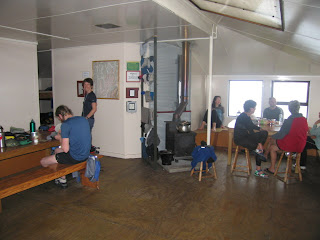 The convivial afternoon was followed by a gourmet supper of seafood soup, pasta in cheese sauce with tuna and butterscotch whip. The chatty evening ended around 9pm when it got dark, rain still lashing the roof. 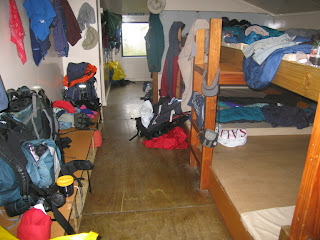 The Pessimistic Report
Woke to the din of Jim's ipod and endured the cyclists chatter over a toast breakfast. Went up to Mt Robert car park and set off laden with everything for a night out. Trudged up a steep path to a sparse shelter, sweating profusely, where it started to rain as we entered the cloud. Very few views after this. Robert Ridge got sharper and breezier and several rock fields slowed us. We didn't reach the summit as it was off the marked route that we thought we'd better stick to in the very low visibility. Met a few miserable people who were having trouble with the rock fields. Ate chocolate to keep us going. Even so, folk carrying nine days food passed us.
Eventually we (Martin) limped down to a mountain hut, just visible through the rain and cloud. The first mug of tea was welcome, but the taps didn't work because of the drought, so we had to go outside (and get soaked) to get water. The toilet was 100m away across a bog. Inside the hut was a man with a long beard and a jolly smile, a 'know it all' Bruce, and a family with a screaming one-year old. The afternoon passed, then we fed on a selection of dried foods and a tin of tuna. After that it got dark so we went to bed, trying to avoid the leaky window that had dripped onto a sleeping bag. Sleep was initially difficult due to sharing a room with a teething child.
Nallo Lady's Report on Day 2
Woke to snow lying just above the hut and a view of the lakes. Soon, fast flurries of snow were falling outside, making the view of the vegetable sheep diminish. Inside, it was cosy and warm, so despite breakfast around 7.30am, we didn't leave until 9am (after discussions with the warden who does a tour of huts on a 10-day circuit, repeated every 14 days!).
Initially, a steep descent, amidst snow flurries, which soon turned to light rain. The descent was superb though, with a mixture of terrain, from beech forest, to grassy meadows, with the sound of rushing water for the most part, and, as usual, profusions of mosses, lichens and ferns. Had to cross several swollen streams, but luckily didn't get too wet.
Today was also significant for spotting purple mushrooms (and many, ordinary types), and black, honey-scented trees with wasps over their trunks (very weird - we need to ask about these in the DOC office tomorrow) - Paul Filby had the same observations here too!
Lunch was in Coldwater Hut, with a view down Lake Rotoiti, on our own, except for a few sandflies. 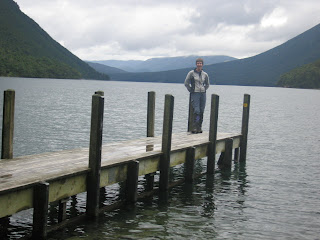 If anything, the rain got heavier during the afternoon, coming in heavy bursts, with not much respite between each. When the clouds did break occasionally, snow lay on the ridge just above the lake.
Reached the car after a 300m ascent around 5ish, dripping, and gave a couple of even wetter girls a lift back to the village.
Pam and Paul - Nelson Lakes would benefit from exploration over a week or so.
Posted by Phreerunner at 07:06