For anyone worrying about anything we said yesterday:

1. We are optimists. The pessimist report was just a joke.
2. We reported on walking through glades of purple mushrooms and honey trees.... We can now confirm we were not on the sort of trip that we thought we might be - the purple mushrooms are, in fact the King's Pouch variety. Our map informs us that 'Honeydew is the waste product of the beech scale insect, which lives under the bark of beech trees. The insects sucks sap from the tree to obtain protein, and excretes sugar-rich waste through its anal filament. The long thread with a honeydew droplet on the end hangs from a black sooty fungus attached to the tree bark. It's a rich energy source for native species of insects, lizards and nectar-feeding birds such as bellbirds, but outside the Wasp Control Areas the sweet smelling (like honey) resource is now dominated by wasps which have been introduced by man.' We were in a Wasp Control Area but still saw lots of wasps.

Today we enjoyed some fine wine and an excellent lunch at Wairau River winery in Renwick. 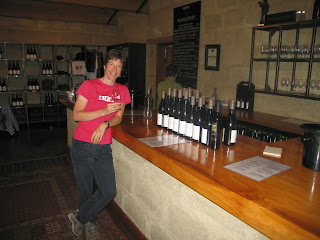 The remainder of the afternoon was spent planning our 'adventures' in the North Island and generally relaxing. The hostel was one of the best yet.
Posted by Phreerunner at 04:26