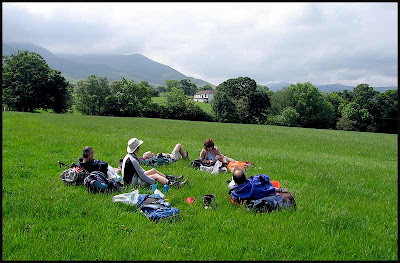 Whoosh! My hat shifted in the draught from the outstretched wings.
Whoosh! The talons nearly got it that time.
I hid under a tree.
Whoosh! Gary nearly copped it.
For a good 5 minutes the sustained attack from the angry buzzard continued. It flew straight at us, dive-bombed us, and generally behaved in a most aggressive and antisocial manner.
Occasionally it would rest on a high pole before targeting us by flying straight at one of us (usually me), almost striking a glancing blow before just missing the ground.

Luckily we all survived the attack from the Mad Bird of Orthwaite. Shaken, but not stirred.

We were greeted today by a cloud over Skiddaw that dissolved our plans to scale that hill on our way to Caldbeck. Gary, Sue1 and I had considered this energetic 30km option but given the weather we reverted to plan A. 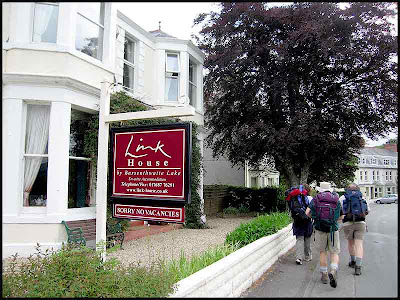 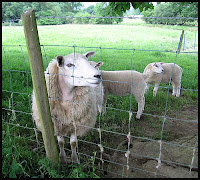 Setting off from Link House at 9am we encountered our first odd animal behaviour at The Ruddings, where a bemused cockerel looked on quizzically at a grunting sheep.

Then we saw a huge pike lingering near the bridge at Herdwick Croft. Trout in the river looked small in comparison. There had been two pike here yesterday. 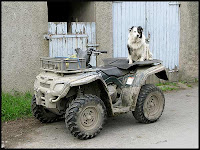 A pleasant path beside Bassenthwaite Lake took us to fields that, according to the signs, should be full of bulls. We saw just one today. 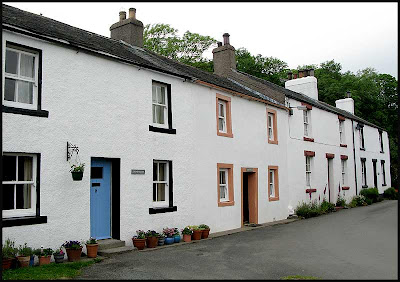 A brew stop (see header photo) near Kestrel Lodge was most satisfying, with splendid views and perfect weather, except that Skiddaw was still in cloud. The supply of chocolate caramel shortbread (CCS) that Sue1 had been carrying all week and releasing to everyone in small daily portions was finally exhausted here. 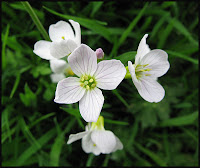 After daubing ourselves with sun tan cream we continued through a wood and on along the Cumbria Way's overgrown footpaths strewn with cuckoo flower, at one stage battling with woolly gorse seemingly impregnated with wrens. 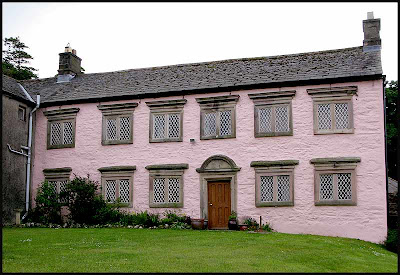 Apart from the angry buzzard there was much bird life around Orthwaite, with goldfinches and a pied flycatcher (I think) vying with guinea fowl for our attention near a lovely pink house.

Further on, past beds of forgetmenots, a small mouse was lunching intently on a squashed worm. It was quite oblivious to our presence (Sue1's short video is here) and seemed quite happy to be picked up!

A disorientated huddle of mountain bikers lurked at Longlands, waiting for their leader who had the map.
He was last.
Lost?! 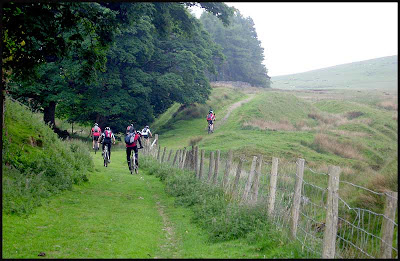 Eventually the bikers filed past, at just above walking pace.

We continued to a lunch spot where a path branched off to 'Great Sca Fell 2¼'. So which Sca Fell had we been earlier in the week? 'Lesser Sca Fell'?
The views were good - no need to ascend! 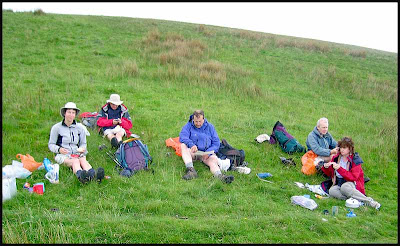 Quiet lanes were bordered by fields, some bright green, others sparkling with yellow beds of buttercups. 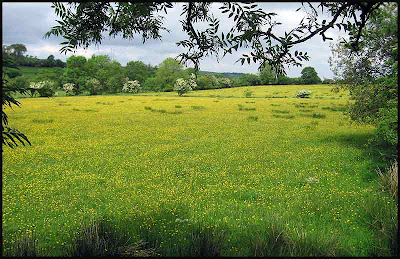 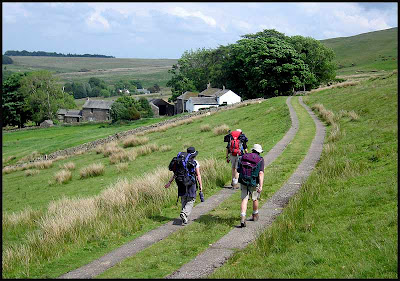 These led past pretty habitations such as Fellside (above), then down through a lovely, if slightly overgrown, green lane (not the Cumbria Way) to today's destination, Caldbeck. 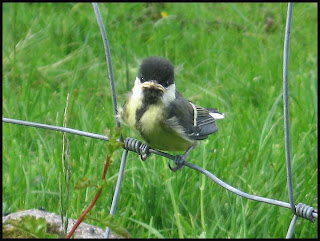 In the lane we had passed a fledgling great tit and some huge specimens of bracket fungus, and the path was bordered by a mass of flowers dominated by pink purslane and herb robert. 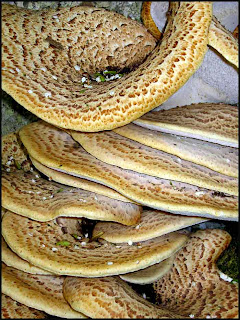 
By 4pm we were installed with tea and cakes at The Old Smithy Tearoom. 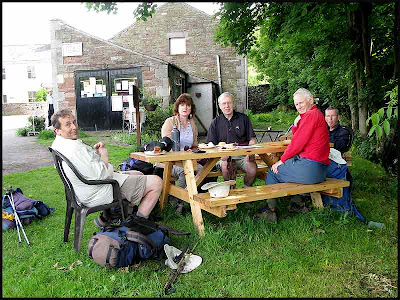 Then we hobbled across the road to the Oddfellows Arms.

All went well until our shower (luckily not of the exploding variety installed at Dalegarth) leaked into the room below, and the walls and floors seem very thin, so shall we sleep?

Meanwhile we have enjoyed a good meal and a pleasant evening. For most of it we had the pleasure of the company of Sue1's 'aunt' (second cousin?), Rachel, who lives nearby. Rachel was looking very well, and in fine form. 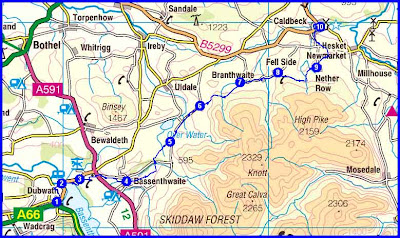 Sent using BlackBerry® from Orange - and apologies for the delay - this was written on Friday, and I spent all of Saturday trying to transmit it. The GPRS simply didn't work and I got the following message when trying to access the internet. "There is insufficient network coverage to process your request. Please try again later." The message didn't appear to relate to signal strength. I finally resolved the problem by taking the battery out for 10 seconds and replacing it! Ho hum!

Now back from this excellent trip, I'll add some more photos and file a report on the last day asap. Now done - 12 June.

Next day
Back to Index

Aggressive Buzzards
Notchy has sent the following link, describing other buzzard attacks in the Lake District:
http://www.cumbriabirdclub.org.uk:80/CBCnews/aggressive_buzzards_of_cumbria.htm
The bbc also reports on an attack in Devon:
http://news.bbc.co.uk/1/hi/england/devon/6688087.stm

We were walking in the same area last Friday (27/6/2008) and had the same experience. That buzzard is very unfriendly and does not like visitors ;-(
I heard a whoosh as well while passing a tree, looked up and saw a huge bird flying away from me (maybe a meter above me).
After that it kept attacking us for quite a while, but now aware of its presence, we swayed our walking sticks in the air during its approach, which was probably impressive enough to stop the 'mock' attacks at a reasonable distance.
I must say it was not a pleasant experience and I guess since this part of the Cumbria Way is right through its territory, more walkers will pass Orthwaite shaken due to the encounter with this buzzard, if not stirred.

And here's another case of the buzzard attacking walkers near Orthwaite. We had exactly the same experience as Robert did, that was on wednesday july 9th. Never happened to us before. Quite nervewrecking, actually.

Thanks for the link Martin - I enjoyed reading this. That brew stop looks idyllic.
I think that your bracket fungus is probably Dryad's Saddle.
I walked the Cumbria way once - but it was in February - it seems like the attacks here were summer ones.