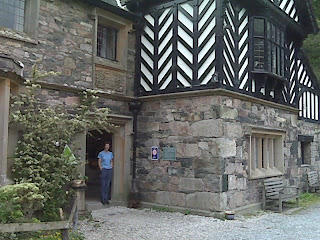 A dose of Gary's early morning packing (it involves packing each item into a separate crisp packet) got us all out of bed in time for the hostel's excellent buffet breakfast.

Then Sue2 arrived from her adequate B+B and we all set off up Sca Fell. 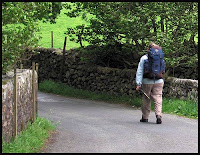 Except Notchy, who headed directly up to Burnmoor Tarn.

It was cloudier and cooler today, but at least the tops were clear. 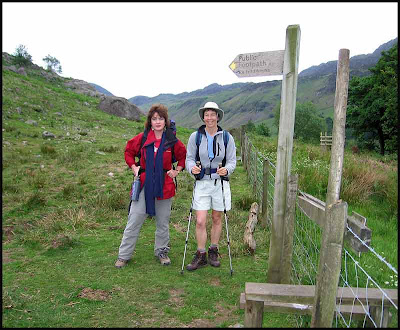 Notchy heads off on his lone and short journey, whilst the two Sues pose at the foot of Sca Fell

Contrast Jaguar Man, with his shiny new gear, including garish winter boots, and a small day sack, with Unkempt Man, who stumbles carlessly out of the Youth Hostel with his heavy rucksack and battered gear...
Actually, Unkempt Man slowly fell behind, but he has all week. Jaguar man must be at work tomorrow.

Passing through areas of cotton grass interspersed with milkwort and tormentil, we strolled easily up the shallow gradient of the well worn path to Sca Fell, whose broad back gradually drew closer. 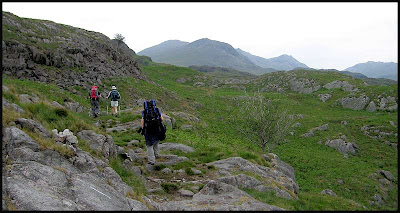 Gary and Sue2 burbled on about weighty work related matters. I felt glad (if not smug) to have escaped from the rat race.

It was a duller day, but we still wore t-shirts.

Then a strange thing happened.

It started to rain! Lightly, but rain nevertheless. It's not supposed to do that on these trips, which we have been running for 4 years now. In all those weeks we've had just a few minutes of rain.

And so it was today. The rain had stopped by the time we reached the summit at noon after a 3 hour walk. It didn't return, though a blanket of cloud did descend to about the level of Yewbarrow. 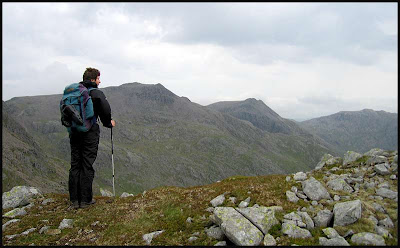 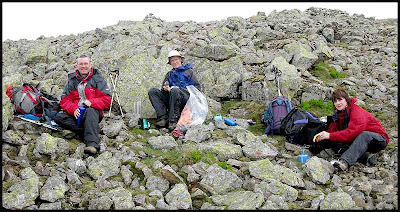 The sharp descent to Burnmoor Tarn over slithery rocks and grass demanded two lunch stops. Just as well, the YHA packed lunches are vast, and 3 of us still have enough for tomorrow.

After yesterday's incident, Notchy's nose looked as bashed as his water bottle. Today Sue2's balance deserted her and her hand, bloodied from a slide on the rocks, is now the second casualty of this trip. Luckily first aid in the form of a dishy pharmacist had been on hand to stem the fountain of blood. 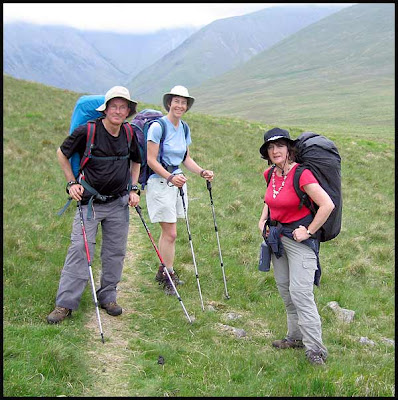 Burnmoor Lodge, beside the tarn, looks impressive from a distance, but Notchy passed close by here today and tells us the building looks sadly derelict, and is boarded up.

A wet short cut took us past three lazy cows and on up the path to Illgill Head. 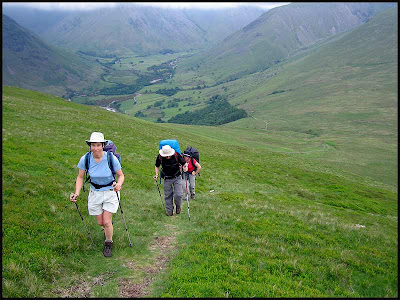 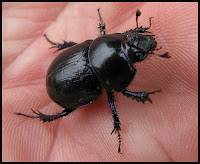 There were lots of shiny inky blue dung beetles around here. Very pretty.

After a brew stop demanded by Sue2, and much collecting of sheepswool by Sue1, we plodded slowly on to Whin Rigg.
The sheepswool is to combat 'hot spots' on her feet, where blisters are threatening to appear. Tom Hume introduced her to this treatment during the recent TGO Challenge.

A steep descent down Greathall Gill was conducted at speed by Sue2 and Gary. I was the one who couldn't keep up this time. 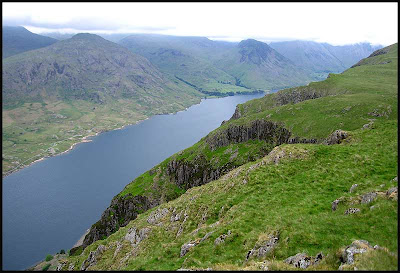 Views from the descent to Wastwater 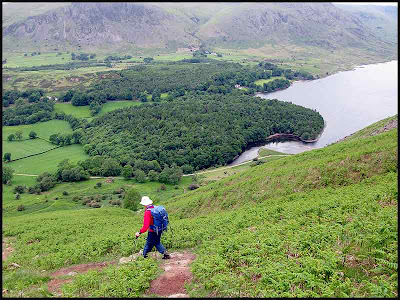 A dark cloud hovered over Yewbarrow as we parted with Sue2, who being a late entry for this trip had a B+B booked some way away beyond Nether Wasdale.

That left Gary, Sue1 and I to bimble through dark woods with chirpy birds.

Wast Water greeted us with the rush of its surf and fine views. 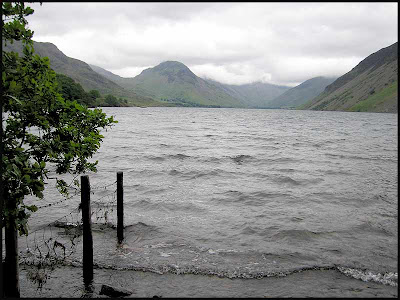 Notchy had arrived safely at the magnificent YHA hostel at Wasdale Hall. We spent a relaxing evening, mainly (once we and our clothes had been washed) in the dining room - the food was excellent - and the library magnificent. 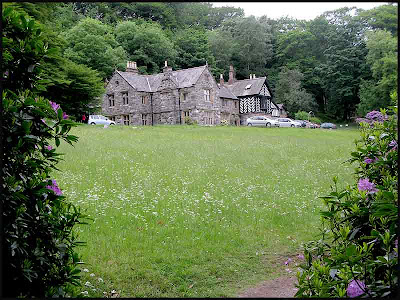 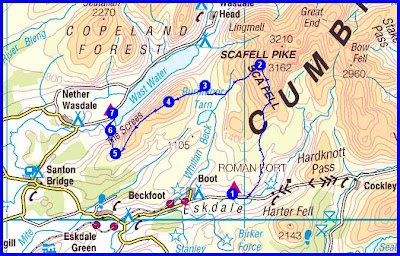 Next day
Back to Index