We waved goodbye to Peter and Barbara - who set off bravely into the cloud and rain enveloping Glas Maol - having relieved them of their oatcake mountain.

The rather quirky (and perhaps least attractive in Scotland) hotel was soon left behind, as we sped along the well marked Cateran Trail towards Mount Blair. 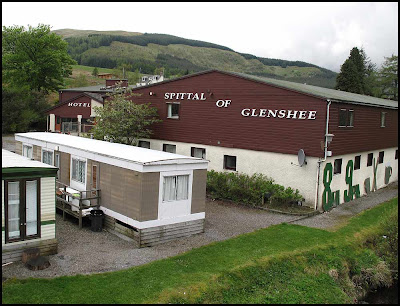 Well, 'sped' isn't quite the right word. We had heavy legs today.

The weather didn't help - 'showers clearing in the afternoon' was the forecast. We spent the morning taking our waterproofs on and off, but kept them on all afternoon as the forecast 'clearing' should have been worded 'becoming continuous'.

It was a delightful path through sheep farming country. The air was full of birdsong, or shrieking - in the case of the oyster catchers.

A noisy woodpecker made no secret of his presence as we passed a small copse.

Then a memorial cross, marked on the map but inaccessible other than through the lens of the camera, was passed, with noisy greylag geese vying with the sheep for attention in the field below. 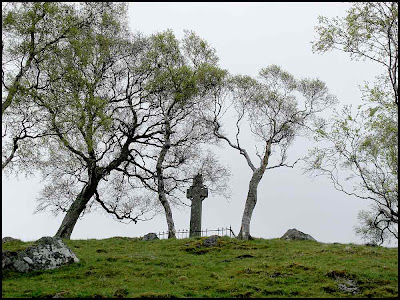 Whilst most fields had their quota of lapwings and oyster catchers, one was filled with common gulls. I wonder why? "We must be getting near to the sea" observed Sue.

The path passed Dalhaglar Castle, an imposing white turreted building outside which pranced a posh lady in wellies and a headscarf, with a long face and two small dogs straining on their leash. The blue pyramids of flowering bugle lined the way here. 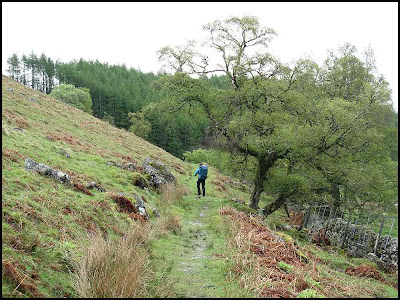 It was approaching lunch time, so we selected a sheltered spot in a dark pine forest in which to enjoy lunch. Just as yesterday though, the rain decided to try to drown our already long deceased mackerel. Another low scoring luncheon venue, but not as bad as yesterday's thanks to the protective, if somewhat drippy, forest canopy.

Climbing Mount Blair was easy after the lunchtime refuelling. The 400 metre ascent was soon reeled off and views from the summit, contrasting between pale green sunlit valleys and high mountains swathed in black clouds, were admired. 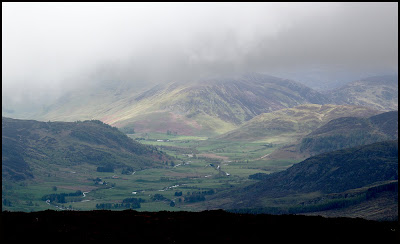 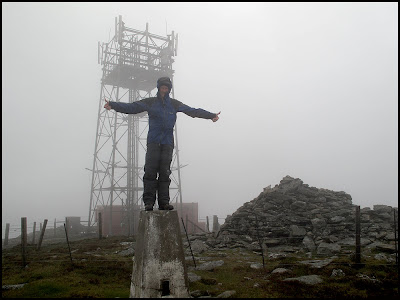 An impressive orientation table (sadly with part missing) adorned the summit, but this was dwarfed by a mast, which at least gave us confidence regarding the last picture posting.

The descent down a narrow sheep track over rocky ground was in complete contrast to the broad path of our ascent from the north west, but we eventually negotiated the steep and often boggy hillside to reach a quiet lane that led to Brewlands Bridge. 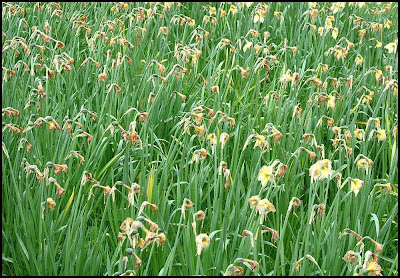 Fields of 'spent' daffodils are common, hereabouts. It seems a shame that the flowers aren't harvested, but I suppose they will be sold as next year's bulbs.

The 'scenic route' via Auchenleish Farm proved extremely boggy. One of my boots has now given up the pretence of being waterproof, so that foot is relying on the Sealskinz socks to stay dry.

After that wetness experience we rejoined the Cateran Trail and crossed the River Isla over an ancient footbridge to reach this splendid old hotel.

There are no other Challengers here, but some have been through, and our friend John Burt stayed last night. "One gentleman was turned away a few days ago because we were full of runners" (a Cateran Trail race), we were told, "but a neighbour kindly gave him B&B." Could that have been our vetter, Alan Hardy, on his dash to Montrose to help at 'Control'? ["No - I don't do hotels" said Alan, so it can't have been him!]

We have enjoyed a hot bath, and the food here is excellent compared to last night's mass produced buffet.

The hotel dates from long ago. Some recently discovered wall paintings seem to indicate that it was in existence before 1750. They are on display in a bedroom. Small but interesting. This place has a long history. 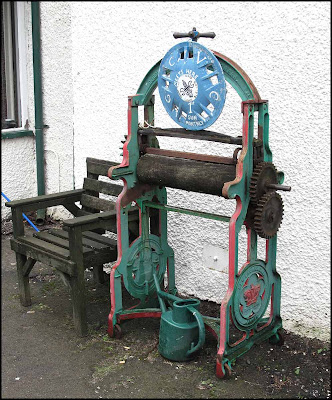 But I won't bore you with that just now. It's time for bed!

Next Posting
Back to Index
Posted by Phreerunner at 08:39