First, a thanks to all who have commented on the previous entry, and thanks to Eileen and Andrew, from Bodmin, on their first Challenge, for being at Scurdie Ness and taking photos at the finish.

It was a hard day, mostly on tarmac. We succeeded in finding some soft green lanes, but the shortcomings of Scotland's footpath system hit home when we strolled for nearly a kilometre up a 'please keep dogs on leads' path, only to find the next couple of km, linking two 'tarmac' sections, had been blocked off with barbed wire and ditches.

With over 40 km to walk today anyway, the additional mileage wasn't welcome, so as we neared our destination we 'ironed' our route and went directly for the lighthouse rather than fumbling our way via Braehead of Lunan. That route can wait!

A friendly local, walking his soft, leathery Dalmation down a tarmac lane in an area that in England would probably be riddled with public footpaths, agreed, telling us how much he appreciated his visits to the more 'walker friendly' Yorkshire Dales.

You just can't tell from the Scottish maps what is public and what is private - it's really confusing, and difficult to plan a route that avoids tarmac as you reach the coast, without hitting annoying obstacles. Yesterday we were highly successful; today, by the end, we had more or less given up.

But today's compensation was the fine, sunny weather, following yet another frost free dawn. For the first time in a week the waterproofs remained stashed all day. The oil seed rape glittered, bright yellow under the beaming sun, and, clad in t-shirts, Tilley hats and daubs of sun tan cream, we enjoyed fine aspects both back to the hilly interior and towards the coast and the Montrose basin.

An early start enabled us to reach our finishing point by 2.30, via our final alfresco brew and lunch spots. Our progress was monitored by stonechats and pheasants as we passed hedgerows increasingly filled with garlic mustard, vetches and forgetmenots. Lanes lined with gorse meant that we could enjoy its coconut scent almost until the east coast seaside smells took over. 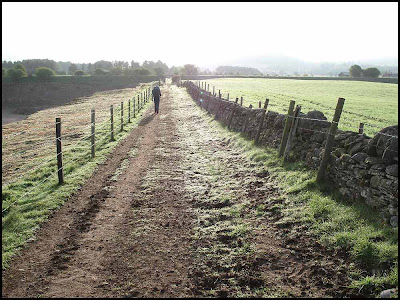 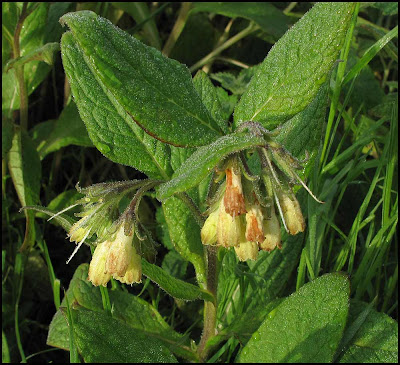 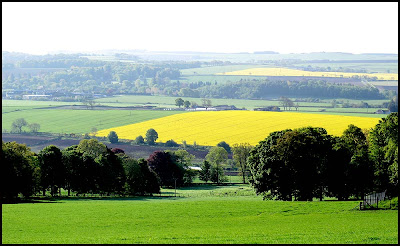 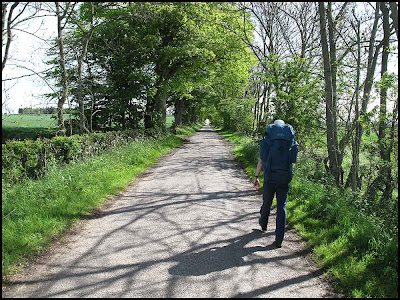 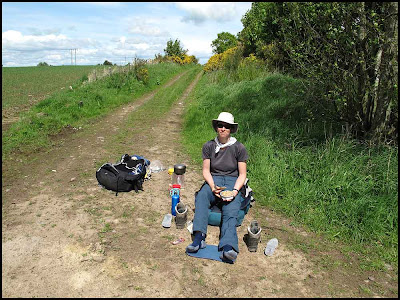 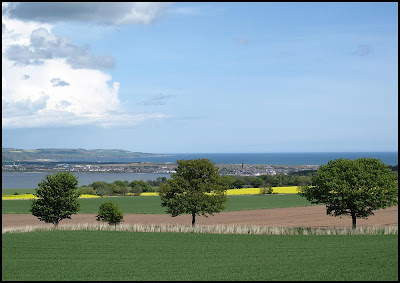 From the Top:
Early morning near Forfar
Common Comfrey - prolific in the lowland hedgerows
An early view towards the sea
Long lanes of straight tarmac were a feature of today's walk
Our last alfresco lunch for a while
Montrose Basin and the sea draw ever closer (is that Good or Bad?)

Luckily, Andrew and Eileen were there to help us mutually record our success digitally, and we walked a short way with them before a pub doorway enticed them inside. Sue (in fear of seizing up) and I continued along the pavements of Montrose to the Park Hotel, and the niceties of recording our success at 'Challenge Control'. 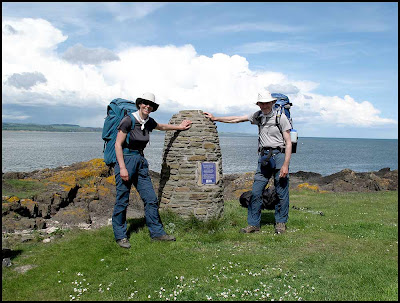 Both the Park Hotel and Montrose campsite are most sociable places at such times. We caught up with folk too numerous to mention individually, including some of the other bloggers. Even 'time-warped Darren' appears to have finished, blaming 'technical problems' on his failure to broadcast beyond Day 5.

We are going to tomorrow night's Park Hotel gathering, so tonight we enjoyed some food at The George before heading back to the Park to prop up the bar whilst listening to Roger Smith (Uncle Roger, aka 'Spiderman') and his 'awards ceremony'. 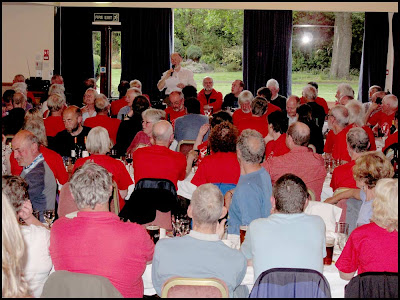 So ended another successful TGO Challenge. Tomorrow will be a day of leisure followed by another evening of revelry, and on Saturday we return home. After that some images and an index will be applied to these 'off the cuff' daily entries - I'll put a note on the TGOC Message Board when that's done. 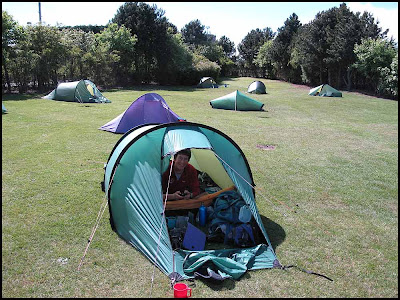 Above: the Saturday morning remnants of the bulging campsite at Montrose
Below: Graham Brookes receives his '20th Crossing Plaque' at the dinner on Thursday, attended by around 100 people 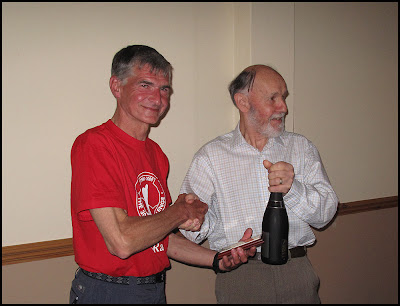 The next little adventure - starring the Phreerunner tent in a week's stroll from Windermere towards Manchester - starts on Monday 1st June.

Back to Index
Posted by Phreerunner at 13:38

Well done not only regarding completing the TGO but for updating all the way. I met some TGO'ers over the weekend 14-16 have to say I admire the determination to continue in pretty unpleasant conditions. (especially as I wimped out on my much easier trip)

Thanks Mac. Actually we had pretty good weather for most of the time, as you will see from the photos when I get them uploaded.

A truly excellent read, both entertaining and informative - well done to you both!