Once upon a time a girl and a boy called Sue and Martin decided to go on a long walk.

They chose a distant country in the Far North for their walk. It was called Ecosse. 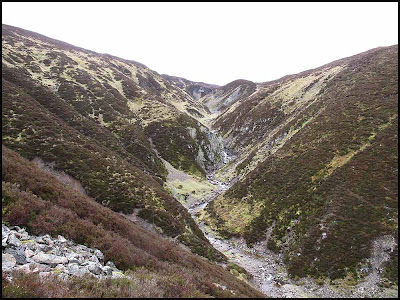 It's barren and desolate in Ecosse

They prepared thoroughly for their journey from one side of Ecosse to the other. They were Well Equipped.

Everything went very well for the first week of the walk. Despite a little wind and rain, and a lot of burning sun, they stayed dry and warm and not too sunburnt. Their Good Equipment saw to that.

One of their pieces of equipment was a house called Nallo that Sue carries on her back. Nallo is like a Tardis. At one end is a library. There is a large storeroom stretching the length of the house, and it has a kitchen in the conservatory. The utility room has a washing line and there are two en-suite toilets. There is also a spacious bed-sitting room with two cupboards. (Alas,there is no room for a separate bedroom.)

On the eighth night of their walk, Martin and Sue were enjoying the evening in their little house, safely tucked away from the Hoplins and Redikins that roam the wilderness of Ecosse, where there are very few humans.

The Hoplins are about 50 cm tall. The males have long legs and can run very fast, but the females are small and usually pregnant. They all have white bobbly tails. Hoplins are mostly harmless except when they burrow in the ground and come up in the middle of your house. Something similar to this happened to Ticktock, a friend of Martin and Sue.

Anyway, during a check on provisions, Sue realised one item was missing.
"Where's the chocolate?" she asked.

A big search followed but no chocolate could be found.

"How will we climb The Big Red Mountain tomorrow, with no chocolate" worried Sue.

"I don't know" replied Martin, who was responsible for the chocolate store (and must have eaten it all). "I expect we'll be alright though."

The next day they set off along the next stage of their 200 mile journey in the wilderness. They ascended an increasingly faint path beside a deep canyon.

"I wouldn't like to slip down there" said Sue.
"We'll be alright" replied Martin "our shoes are very grippy as well as being waterproof."
"It's just as well they are waterproof" said Sue, "or it would be very unpleasant."

The path across Ecosse is very boggy in places, and today's route was no exception.

Eventually they reached the head of the valley and descended to another, wider, valley called Glen Bruar. There was a good path here, but a cold wind blew up the valley.

"It's a good job we have warm clothes and gloves, isn't it?" said Martin.

Sue was very quiet. The Big Red Mountain was getting closer. 'How will we get up that with no chocolate' she worried.

They reached the junction with the path that led steeply upwards into the clouds.

"Let's have lunch" - both Sue and Martin agreed this could legitimately delay the decision as to whether or not to attempt to go up The Big Red Mountain without any chocolate.

By and by a kindly looking man with a long white beard appeared as if by magic.
"I'm Peter" he explained "and this is Barbara" (a glamorous lady appeared beside him) "we are going to Montrose" he said. 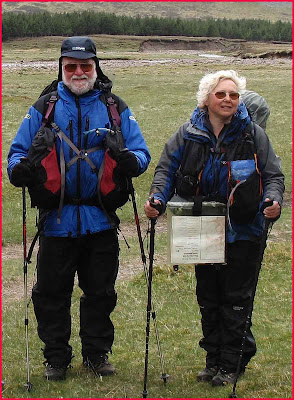 "Wow" said Sue, forgetting that she also was going to Montrose.

"We are taking the low road" offered Peter, "how about you?"

"Well, we wanted to take the high road over The Big Red Mountain" replied Sue, "but we have no chocolate."

"Oh dear" said Peter, fumbling with a piece of his body that should have belonged to a woman.
"It's Good Equipment" he exclaimed, noticing Sue's concern that he might be a....
"It's a new invention, "a Booby Bag" he enthused, extracting a long thin brown object from his breast.

"Here" he said, "we have extra supplies from The Martian Chocolate Shop. Have this, it will help you to climb The Big Red Mountain."

Sue and Martin were so thankful that this Good Samaritan with the long white beard and the glamorous lady had appeared at such an opportune moment. They were nearly the only humans they saw all day.

So The Big Red Mountain could be climbed, and it was, thanks to the big brown bar that Martin and Sue used to refuel themselves half way up. The clouds briefly cleared and they even had a view from the summit, their twelfth of the trip, all with views.

It was therefore a happy couple who romped down the hillside to place Nallo on the flat patch of grass that would be home for the night. That was done just before a big black cloud decided to empty its contents over that very spot.

But Nallo is Very Waterproof, and anyway the sun shone later whilst Sue busied herself in the kitchen, and Martin.....

...well, you'll have to guess what Martin was doing!

Next Posting
Back to Index

Thanks for blogging this, I've just discovered the TGO Challenge and it's good to read a blow-by-blow account.

Looking at your gear list, You seem to have lighter water up there than the stuff we have been foisted with down here in Australia: all of ours weighs 1Kg per litre, I feel so ripped off!

Excellent post. We recall meeting Peter & Barbara at the top of the Corrieyairack in '99 after a splendid night at the Tomdoun. On that occasion Peter produced, not chocolate, but more of the amber fire water. Good to know that their good works continue. A splendid chap & chapess indeed! Phil & Tini

"you'll have to guess what Martin was doing!"

The mind boggles. Still; it's a free country and in the privacy of your own homes...

I suspect the water bottle used for the purposes of the kit list wasn't quite full, Michael - sorry about that - but you might still like to do the Challenge - don't let the weight of the water put you off!

Phil - thanks for the comment - it was good to be at Challenge Control on Friday afternoon when P and B finally tottered in, just after John Burt, when there were only a few other folk to finish.

Alan, I was probably asleep, and for all I know, you were cavorting with a Naked Rambler...