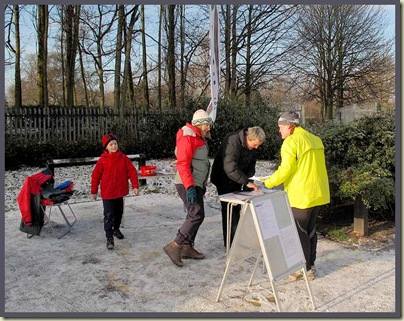 Back in the summer, in the Maritime Alps, we met some orienteers.  They enthused about the sport.  Today I decided to try it out for myself.

I’d discovered that my local club - Manchester and District Orienteering Club – organise a series of Saturday morning meets, suitable for beginners, so this morning I headed off to nearby Woodbank Park in Stockport.

The registration point was manned by a lady called Sue, and everything was friendly, welcoming and relaxed.  I paid my £3 and borrowed a ‘dibber’ – that’s a little electronic gadget that you insert into a device the size of a small GPS unit at each ‘control’ point.

Then I wandered off to the start, where my 45 minutes of searching for ‘controls’ started with my first ‘dib’ of the dibber.  I was then handed a 1:7500 scale map showing 21 numbered ‘controls’.

I strolled off, alone, as everyone starts individually – after the person in front has disappeared.  Where the **** was I?  I was completely disorientated!  It took me a good five minutes to get sorted out, my whereabouts being confirmed by the discovery of control number 113.  Great.  I ran off and soon found control number 104, but looking at the map I realised I’d missed number 126.  I’d gone right past it.  This was harder than it looked!

So I went back and dibbed that one, then set about taking a bit more care to visit as many of the remaining controls as I could, by way of an anti-clockwise circuit.  Most were easy enough to find, but eyes in the back of the head would have helped, and some markers seemed to be placed at the very edge of the 50 metre diameter circles that indicated their presence on the map.  The conditions were lovely – cold and firm – and I soon found myself a little warm, having inadvertently dressed for a slow winter hike.

With 15 minutes left, I found myself at the far end of the map, so I jogged back to the start/finish, visiting whatever controls I could find en-route.  I even found an extra one not on my map.  I’ve now checked the web site and have discovered that there were five such extra controls – indicated on maps at certain control points.  This had gone completely over my head.  Anyway, I got back in just under 47 minutes, so I received a time penalty, but I had managed to visit 17 of the 21 control points on my map, plus the extra one that would only count if I’d ‘visited its ‘slave’ control first’ (I have no idea).

Back at the registration desk after my 5 km jaunt, the dibber was downloaded and a small print out showing times and numbers of the controls I had visited was handed to me together with a Rose’s chocolate.

Sue told me ‘the results should be on the web site by early next week.’  So then I’ll have a better idea of how many people were taking part and how I did, though really I’m not that bothered – this turned out to be an enjoyable way of getting a bit of exercise on a bright frosty Saturday morning.

There’s another event, even closer, in January.  I may well be there.

Postscript:
23 people took part, 12 of whom were in the ‘Score’ competition in which, so it seems, I participated.  There were 26 controls.  Two people visited them all, but both of them exceeded the 45 minute limit.  I found 18 controls (180 points) and incurred 10 time penalties, so scored 170 points, coming 8th out of the 12 participants, and taking comfort from the fact that I was the first ‘over 60’ to finish, and all those above me were members of orienteering clubs.  There’s certainly room for improvement though!

Well done Martin! I've just checked the MDOC website, I may have a go at the event at Lyme Park in January...provided I can get a pass-out!

Thanks, John. Can't make Lyme Park, but may go to the Wythenshawe Park event on Sat 9 Jan (being as it's just round the corner...)