JJ had suggested latching on to the Long Distance Walkers Association (LDWA) for today’s saunter, so we duly assembled at
9 o’ clock outside Timperley Metro Station, which is a mere two minute walk from our house, but somewhat further for Mick and Gayle, who travelled all the way from near Burton-on-Trent for this rather urban perambulation around Altrincham. 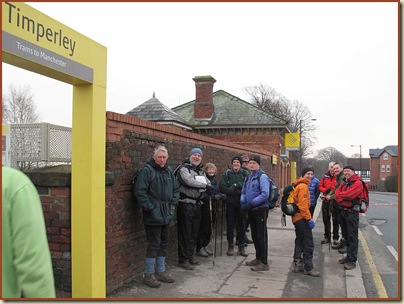 By the time we had hi-jacked a passer-by (Andrea, on her way to post a letter) there were 15 of us in a merry group that could have done with a scythe to clear the path along the eastern side of the Bridgewater Canal.

It then became easier, as we crossed playing fields and progressed through an assortment of ginnels and alleyways, before arriving at the secluded path known as the ‘Boggart’.  The guide book to this walk, produced in 1989 by the Workers’ Educational Association, describes ‘The Timperley Boggart’ path as ‘one of those backwaters that invite exploration – dark, enclosed, mysterious and twisting.  It is the last tangible remains of an ancient route that once connected the Roman Road, near Sale, to Timperley and beyond.’

A shame then, that we discovered this path to have been ‘gated’ by the council, and as we possessed neither a key nor a ladder we were obliged to divert briefly from the ‘classic route’.

Soon afterwards the busy A560 road linking Altrincham with Stockport was crossed, and we entered an increasingly rural environment as we passed serenely down Brooks Drive, another ancient thoroughfare that is not blighted by motorised traffic. 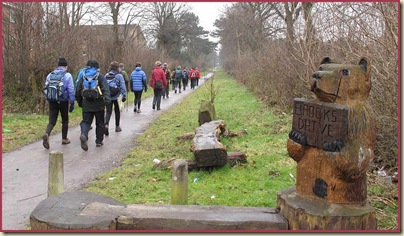 Somewhere along the drive, we lost Sue and Andrea, who were keen to say hello to the lady in our local deli.

Meanwhile our leader, John, strode on (there is a reason for the journal of the LDWA being named ‘Strider’) past the posh Indian enclave leading to Hale Road, then on through the more modest mansions of Hale Barns, eventually reaching the banks of the River Bollin, where a tea break was in order (ordered?). 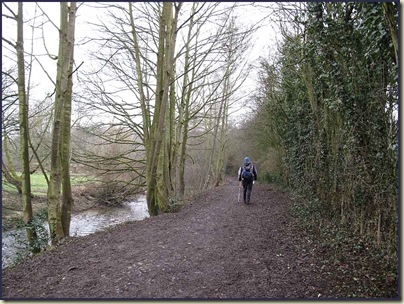 Fudge brownies were distributed (by a lucky coincidence I had exactly 13 with me) and drinks were supped.  It was 11 o’ clock.  Some folk ate their lunch.  Perhaps a wise move, as halts on LDWA excursions seem to be few and far between compared with my ‘normal walks’.

Mick and Gayle searched in vain for a geocache.  The footbridge that led into more pleasant Cheshire countryside, and my previous incarnations of this walk, was declared to be ‘off route’, so a second geocache that I had thought we would pass would no longer be encountered, as we were to follow the classic but rather more urban version of this walk, through Hale and Bowden, where the Executives of Tomorrow were being taught some basic business techniques. 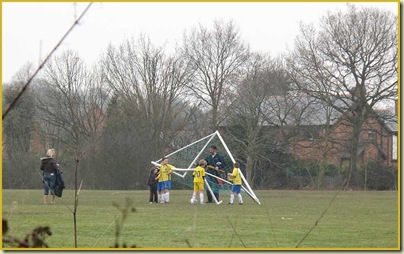 As we approached the main A56 road, we descended once more to the River Bollin.  It was very, well, slithery.  JJ was most relieved to emerge unscathed. 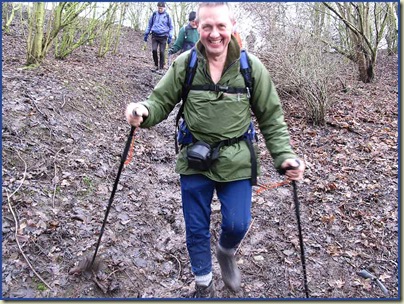 After passing a pub (JJ exercised restraint) and rejoining the more rural route option the path crossed a farm track that is muddy even in the height of summer.  Today it provided ankle deep slurry… 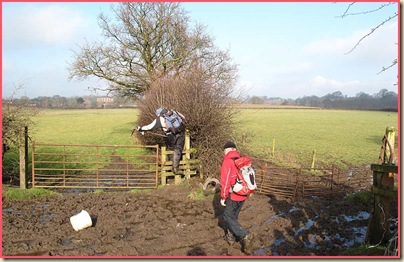 …or was it waist deep slurry?

Yes, our esteemed leader gave a brilliant imitation of a hippo writhing in a shallow river of mud on a soggy day. 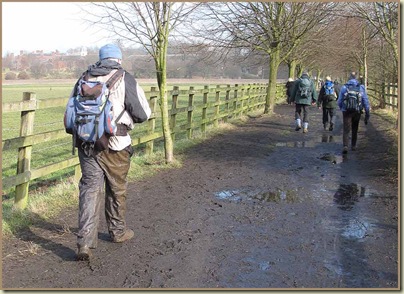 Actually, it was a sunny day, but chilly.  Most of us wore gloves all day, and we (ie walk-leader John) couldn’t be bothered to disrobe sufficiently to be allowed in to The Swan with Two Nicks (“whinge” – JJ), so we trudged on down the muddy track to Dunham Massey, where the pump house looked quite attractive in the afternoon sun. 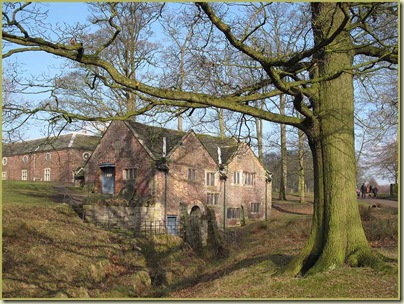 It was after 1.30.  Time for lunch!  Now we knew the wisdom of butty eating at ‘elevenses’! 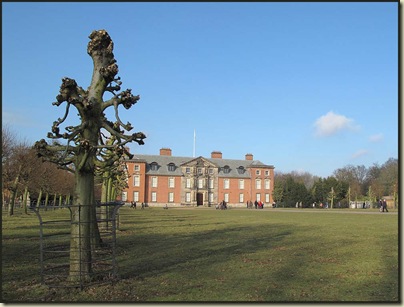 We chomped in the shelter of the yard, outside the impressive mansion that was donated to the National Trust by the 10th and last  Earl of Stamford.  It was opened to the public in 1981 after five years’ restoration.  It must have been left in a poor state!

Our hike progressed.  Beyond Dunham Town and its Big Tree, leader John shot off over a stile in the direction of Dunham Golf Course.

Others (you can see JJ lagging at the back, for example) were bemused. 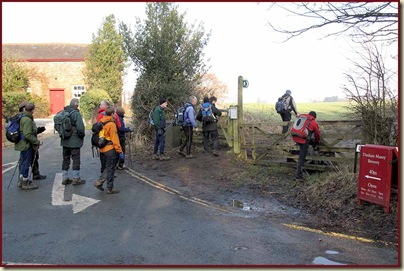 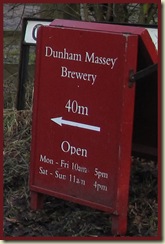 “Surely we should be heading 40 metres to the left?” someone remarked.

Quite a few of us, actually, muttered this under our breath.

But John was off and away.

There was no stopping him.

“We must visit the brewery some other time, perchance” the congregation chorused.

“Whinge” said JJ. (Or words to that effect.)

Anyway, the stately trees beside the golf course were, as always, very photogenic. 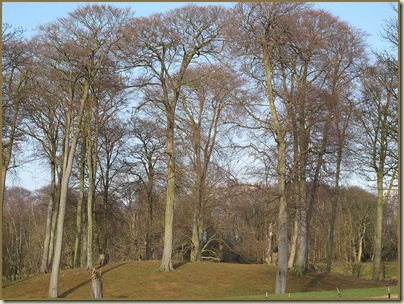 Beyond here, suburban roads led down to a narrow bridge over the Bridgewater Canal, and thence to the Bay Malton public house.  Needless to say, we passed straight by this hostelry (“whinge” – JJ) which apparently now masquerades as a Thai restaurant.

The pleasant, if rather urban and litter strewn, towpath led us directly towards Timperley, until the circular nature of the route necessitated a turn off the towpath shortly beyond the Linotype clock tower which pretty accurately disclosed the time as 3.41.  The first image uploaded to this blog, on 1 October 2007, was a picture of this clock tower which, coincidentally, I passed at 3.41 on that day. 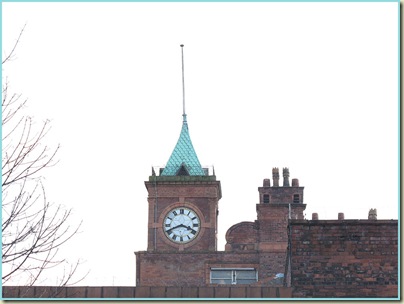 Strange.  I always seem to pass this clock at the same time of day! 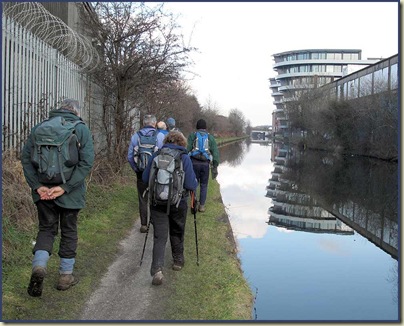 …but we found our turn soon after this, and romped through the streets and alleyways of Broadheath, then over a disused railway with its rails intact, and through a new housing estate at Stamford Brook, before completing the day’s circuit by way of Sinderland Brook, Woodheys Clough, Baguley Brook and the towpath of the Bridgewater Canal.

We walked quite briskly today, for 30 km, with an estimated 200 metres of ascent, taking about six hours excluding stops.  That would be a tad quicker than Mr Naismith’s pace.  LDWA pace, in fact – good training for all of us who are preparing for long walks.

“Missed a few pubs, but we’ll be fitter than those two slobs who are going scuba diving in the fens with Miss Whiplash” quipped JJ (under his breath, but I heard him!).

I’m sure I heard him… 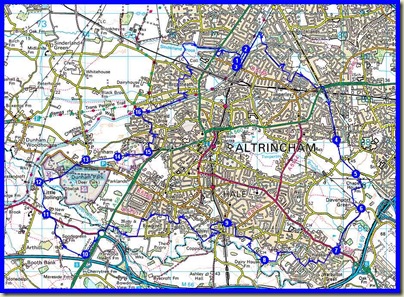 As Gayle reports (here), there wasn’t much time for photos today, but the few that I took can be viewed on a Picasa slideshow here.

Finally, I do apologise to any delicate minded person who may be offended by any of the wording of this posting, in particular the industrialists of Altrincham.

In a figurative... poetically licensed... walking past pubs... sort of way, my boy!

A route-march through the industrial landscapes of Grim-up-North, without a single pub! AND! Passing a Brewery!

What sort of training is that for the challenge then?

You are of course correct Alan (humour him) - we passed at least 3 pubs and a brewery (a record?) and as there was no significant ascent it could hardly be described as 'Challenge Training' (don't mention the scuba gear needed for crossing the Bollin). Anyway, all 'Challenge Training' features Pies, and we'd eaten them the previous day (don't mention the smoked salmon sandwiches).
Ee it's Grim-op-North.