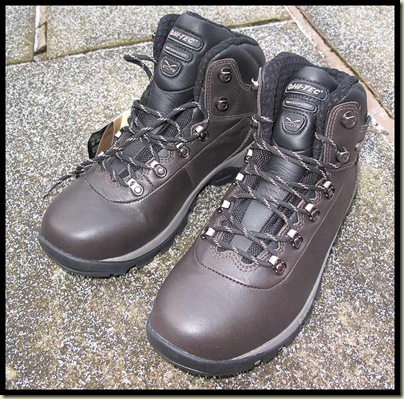 Back on 29 November 2008 I was given these boots, originally intended for Alan Sloman (luckily they didn’t fit him, but they did fit me), on the understanding that I would review them in due course.

Today they were binned, so perhaps it’s time for that review.

First impressions were that the boots were comfy and very light.  In fact the first time I wore them, for 22km, they were so comfy that I didn’t bother to change out of them for the two hour drive home from mid Wales.

At this point I agreed with most of the comments in Outdoors Magic’s ‘First Look’.

After 50km I wore them on a damp day in Torridon.  This was their first real exposure to wetness.  They immediately leaked, so they weren’t worn for the rest of the trip.  They leaked in wet weather thereafter.  They were not waterproof.

In June 2009, with the prospect of dry weather, I used them to backpack a variation on the Dales Way.  They did around 185km on this trip, but whilst initially being extremely comfy, by half way one of the boots had rubbed my ankle sufficiently to cause a painful tendon problem.  This resulted in my walking in Crocs for 10km or so to try to minimise damage to the ankle.  It rained on the last two days of this trip, so I finished with SealSkinz socks deployed.

After a few months’ break to avoid further tendon problems (luckily my feet were fine in my other footwear), I donned the boots again for some dry October days in the hills.  After a further 60km the stitching on top of the toe boxes split. 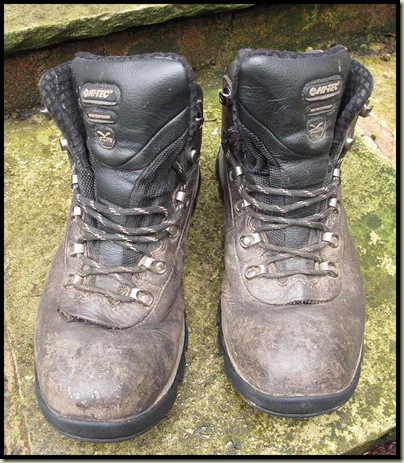 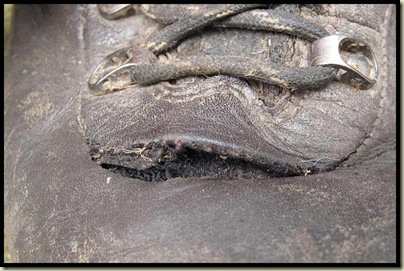 The boots can’t really be worn in this state as the toe box flops around loosely and the boots really do feel as if they are falling apart.  Which indeed they are.

The soles were virtually as new, but that’s of little comfort.

My records indicate that the boots lasted for 487km of walking, over a period of a year, mainly in dry weather.

During the same period I covered around 1000km in a pair of Asolo Fugitives.  These also leak, but not as soon or as badly as the Hi-Tecs.  Nor do they show serious signs of wear, despite having been used in much rougher conditions than the Hi-Tecs.  I have an older pair of Fugitives (see here) that are now on their last legs after over 2000km.  Incidentally, the Inov8 Roclites purchased at the same time as the Fugitives lasted for only 290km before being binned – the uppers of those shoes being less than robust; but that’s another story.

Postscript
On 3 March I received the following email from Hi-Tec’s marketing department:

Hi Martin,
I recently came across your blog and was extremely disappointed to see you weren't happy with your Altitude Ultra.
Firstly, on behalf of HI-TEC I sincerely apologise for your terribly (sic) experience with our footwear.
Please be assured your experience is truly disappointing not only to your good self but to everyone who is involved with the HI-TEC brand.
As a company we are proud to have a faulty returns record of under 1% (industry standards of 4%) and we pride ourselves on the quality, comfort and performance of our product. On this occasion we have failed and I am going to try my very best to rectify this fault and improve your experience.
I would appreciate the opportunity to send to you another pair of boots free of charge. I would like the opportunity to change your perception of the Altitude Ultra boot. It looks as if you had the first model and since then we have released a new model under the Altitude Ultra luxe, which rectifies a number of issues we had with the first model. If you would rather receive something different then please let me know, however I would love to turn your opinion round on the Altitudes Ultras.
Please can you confirm you are happy to receive the Altitude Ultra Luxe including your boot size and delivery address and I will organise delivery to you asap.

So I contacted Hi-Tec, stating that whilst it would be nice to have another pair of the Ultras, what I really needed was a trail shoe that would be more robust than my failed Inov8 Roclites.

On 5 March I received the pair of Hi-Tec V-Lite Thunder HPi shoes that I’d suggested may be appropriate (perhaps I should have requested Hornets, but hey).  I’ll be posting about them separately.  They are ‘Adventure Sport’ shoes and retail for about half the price of the failed boots, so you could say I’ve lost out, but given that the original boots cost me nothing, I think Hi-Tec should be praised for their alertness and generosity.

I should add that other reviewers don’t all seem to have had the same problems with their Altitude Ultras, but if they have lots of kit to review they may not have ‘worn them to death’ like I did.  A Google search (which probably brought you to this page) will no doubt reveal more.

I would of course be happy to give the ‘luxe’ model a try (to turn my opinion), should Hi-Tec be brave enough to risk that by sending me a pair!

I've discovered, over the years, and various Hi Tecs, that I can't wear them. It's usually a problem in the heel/achilles area. Interesting review.

I've got a funny feeling that boot testers wont have the time to notch up 1000km in a pair of boots to test their durability but will do only a fraction of this. On this basis they can never test the durability like those that will keep them for their full lifespan will.

Fair play to Hi Tec though.

I bought a pair of HiTek Altitude Ultra boots last Autumn and they lasted the winter OK with a few minor leaks in very wet weather. However, when the spring arrived and dew started forming in the morning I found that water easily penetrated the upper stitching. - within minutes They may be ion coated but they're certainly not waterproof. Nick