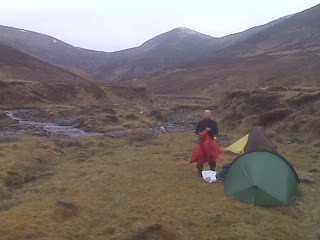 My fears were unfounded. A couple of j-cloths to empty every three or four hours hardly constitutes a disturbed night's sleep. The Phreerunner's seepage was minimal. Everything that wasn't already rain affected remained dry.

By contrast, Markus described his night in the TN Laser Competition as 'horrendous'. His new tent doesn't seem to have been designed for wet and windy Scottish nights, and his gear is soggy from condensation. He also worried that the river (pictured - this morning - Markus must be a 'worrier' as well as a light sleeper!)) would burst its banks (that didn't occur to me).

The rain stopped before we got up. My tent dried out, Markus's didn't. We started walking at 9am as usual, along the pleasant tracks of Glen Roy and Glen Turret. After a brief encounter with the ghost of an erstwhile TGO Challenger we embarked up the pathless slopes of Teanga Mhor. Markus said he'd never backpacked up such a steep slope. I said he must have chosen some pretty poncey routes in the past. It was warmer than of late. T-shirt weather! Though sadly a greyish haze enveloped the high snow laden peaks that surrounded us.

We made it to the top, across peat haggs that I found more taxing than the initial steep grassy slope. The peak was called. Carn na Larach (745 metres). There was nobody else there. It's an exclusive spot!

More haggs and an exceptionally boggy track led us to Glenbuck Bothy. I'm not a fan of bothies, but this one was spacious and spotless, if colder inside than outside. An empty pair of Crocs lay on the hearth. Lord Elpus? Did he make it this far?

Easy paths led down to the Caledonian Canal, where I actually applied sun tan cream for the first time on this trip. Swallows and Pied Wagtails replaced the Curlews and Meadow Pipits that we'd got used to in the mountains.

At Cullochy Lock the keeper was letting a boat through. "That's 12 today" he said, adding that he expected to log over 1000 boats during July and August.

Two hours later, after encountering the first backpackers seen by Markus on his entire trip (they were doing the Great Glen Way), we reached Fort Augustus. It was 5pm, after 24 km, 660 metres ascent, and 8 hours' walking. Plenty of time to set up camp at the new campsite (a lovely flat lawn), freshen up, and enjoy a celebratory meal at The Bothy restaurant.

That ends my 'mobile' postings for the time being, as I have to return home after this most enjoyable six day stint with Markus, whose progress you can continue to follow via the link from the home page of www.topwalks.com.

Will he get to Cape Wrath? He's nearly half way. But quite tired...

Thanks Martin/Markus. Have enjoyed your postings. Glad you have enjoyed it and good luck for the rest of the walk.
Sorry to hear of the TN comp. thats bad news. Not what you expect from TN.

Pleased to hear you enjoyed the postings. Markus is continuing to report over at http://www.topwalks.com/caledoniatrail.html. There's nothing wrong with Markus's TN Laser Competition tent. It's probably a fine tent. It's just that he's using it for long distance backpacking in April in Scotland! Like most modern tents, it suffers from condensation, which would be fine on a mountain marathon, but isn't so acceptable on a long backpack. This is an example of weight Not being king - my tent was double the weight, but incomparably more comfortable - certainly well worth the sacrifice.

Sorry Martin when you mentioned seepage i came to the conclusion it had leaked.
Yes condensation is a problem that manufacturers don't seem to do enough to reduce.
I think it's time we had an Event tent to have a go at.

Ah, I did refer to 'seepage'. That's a minor problem of my old Phreerunner tent. A j-cloth keeps it under control. It's an age thing, and you're correct, why no Event tent? The only reason I've been given is fire retardment regulations for tent material, though why it should be any more dangerous than the stuff they use for tents, I don't know.

I remember Exped doing one a few years ago and i have just googled it and you can still buy it.
I would have thought that if it didn't have the fire regs certificate then it couldn't be sold in UK.?

I have absolutely no idea what the situation is regarding eVent tents. Maybe someone out there could let us know.

Martin, Found this on the Prolite gear site. Just thought you might be interested in reading it if you havn't already.
Is eVENT a good fabric for a tent? Will it hold up in a wind storm?

eVENT is exceptional fabric for a tent or bivy sack. While condensation will form in a humid tent made of eVENT, much like it does on the inner wall of any tent, the tricot lining disperses moisture that promotes its transport (as vapor) through the eVENT membrane. In our testing of tents and bivies, we've found eVENT fabric shelters to be far more breathable than their Gore-Tex cousins of five years ago, and in most conditions, as or more breathable than their EPIC fabric counterparts. Because of the resilience of eVENT fabric (i.e., its resistance to deformation under tension, as a result of its 3-layer construction), it's an excellent fabric in the wind. In direct comparisons of nearly identical shelters (Black Diamond Firstlight Tent, made with EPIC, and the Integral Designs eVENT MK1Lite), we found the MK1Lite to be more stormworthy in terms of both wind resistance (stability) and waterproofness. In addition, eVENT is a completely wind proof fabric. Cheers. Alan

That's very interesting, Alan.
I've not researched this and certainly don't intend to 'experiment' on the TGO Challenge, but it does look as if there may be some options out there, though if there are - why don't Challengers and LEJOGers seem to be using them? And why haven't they appeared in bright lights in the outdoor press?
I can understand the MK1Lite being of no interest to the UK market as it has no porch; have you spotted anything that may be suitable for UK backpacking?

Just had a look at the Integral Designs tents. There is an optional vestibule - but the tent and vestibule would weigh the best part of 3 kg - that's a bit heavy in my book!

I havn't seen anything else but that doesn't say that their isn't a cottage industry type company having a bash in the US or China.
If it's a decent material for a tent as Prolite suggest, you would have thought somebody would have put one together in a light version. A similar tent to yours for example would be a good place to start.
I agree 3lb is twice as heavy as you want one to be.
I will keep looking.