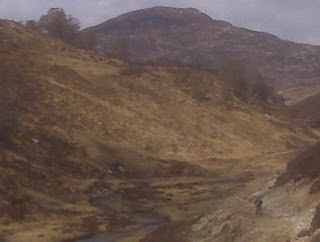 We are residents of 'Knipe Copse' at NN 495 845, by the wave lapped shore of Lochan na h-Earba. Why Markus has thus named this Des Res I don't know, but hey - it's his route, and his choice to stop about 5km short of his planned camping spot at the head of the lochan, which is really quite a sizable loch.
The rain is pattering against the tent, so it was perhaps a wise move to halt at 5.15.

It has been another good day. We were launched in splendid fashion by an excellent Scottish breakfast ("that's just one sausage, Full English is two" [HA!]) provided in the immaculate breakfast room of Eagle View Guest House. All guests breakfast around one large table - I like such places.

A dash to the bus stop, and a chat with a lady who confirmed that none of my (English) pensioner's concessions would apply in Scotland, preceded the 12 mile ride (£6.90!) back to Dalwhinnie.

So much for devolution. This Scottish lady has the same problem in England.

Markus, who had failed to pack his rucksack at the B+B, then enjoyed a 15 minute faff in the comfort of the bus shelter. He was laden with the ballast of new provisions today. So was I, but I've left the food mountain at the B+B for collection on Sunday, so my pack is lighter than when I started out on Monday.

The 10 o' clock departure was an hour later than usual. Not really a problem, we agreed as we sauntered past the Dalwhinnie Inn, which now claims to be opening on 3 May. The date changes to some random date in the future every time I pass the place. Markus had originally booked it for last night, and had struggled to get a refund when he discovered it was closed.

Leaving the road, we didn't have the bottle to venture along the old route of the Drovers Track through Allt an t-Sluic. Dogs barked wildly as we passed down the waymarked diversion beyond an angry red flag. Not good.

All that was soon left far behind, and we haven't seen a soul since leaving Dalwhinnie. Meall nan Eagan shone brightly in the sun (pictured, with Markus bottom right), before another shower arrived. We had a few of them today. I was reminded of the rough nature of that hill as we passed through the narrow defile that leads to Lochan na Doire-uaine, a forbidding place surrounded by lumpy tussocks and edged by the skeleton-like bleached corpses of prehistoric trees.

We had emerged from the defile to fine views of Geal Charn, ahead, and of the entire Creag Meagaidh ridge. Markus was impressed. He had never seen it laden with snow.

A little further on we lunched under a cold shower. Bad timing. Then it was on to increasingly sound Land Rover tracks, including one of motorway proportions, for the rest of the afternoon. We disturbed four young stags - the smallest of many herds of deer that we've seen over the past few days. A chorus of curlews joined that of the ubiquitous golden plover today, and lapwings flapped lazily over the lower slopes.

Our camp, reached in 7.25 hours after our 23 km trek with ascent of 420 metres, has a fine view of a very interesting hill, Binnein Shuas (746 metres). It looks impregnable from here.

Well, it did before it went dark.

In the meantime I've enjoyed the culinary delights of Tesco's best:

Markus, meanwhile, claims to have enjoyed his Norwegian cod and mash - all apparently rehydrated from the same packet!