A Short Journey in the Peak District - Part 2 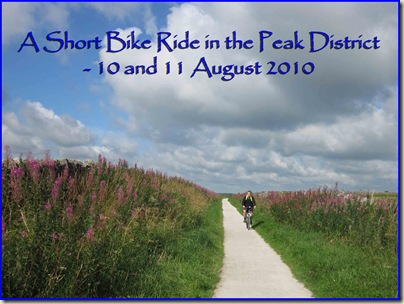 Yesterday’s return from Bonsall to Marple was as enjoyable, if less eventful than the previous day, which featured sections of bridleway almost impenetrable by humans, let alone a human with a bike.  The bike was slimy from the all over spray I’d applied before setting off from Graham’s house in Marple, and the act of lifting it over gates and fences, together with having to deal with the disintegration of my front mudguard, transferred much of that slime to my body and clothing.

So I hope I didn’t transfer too much grime to Ken and Anne’s house in Wensley, or to Sue and Phil’s in Bonsall.

Yesterday’s route saw me flying down the hill to Cromford on a steed cleaned by the grassy meadows north of Tearsall Farm the previous evening, and with no technical problems at all I remained pristinely clean until I had to load the bike into the car at the end of the day.

Intake Lane took me up to the incline plane that marks the start of the High Peak Trail.  Up the incline, and two further inclines, and along the trail for about 10 km (pictured above) seems easy enough.  But a moderate head wind made sure that I worked hard to make progress, even on this easy terrain.

Leaving the trail by Minninglow Hill, I pottered along country lanes to Biggin Dale, and through lots of gates to Hartington.

The Beresford Tea Rooms provided coffee and a huge piece of chocolate cake.

A mixture of quiet lanes and enjoyable bridleways drew me north west over undulating terrain.  A band of rain enabled me to test my waterproofs.  The trousers ripped.

The day had started in bright sunshine, but by the time I came into view of Shutlingsloe gloom prevailed, though by 4.30 pm I was enjoying tea in the sunshine in Graham’s stunning garden.

Here’s the first view of Shutlingsloe, as it appears from Tagsclough Hill. 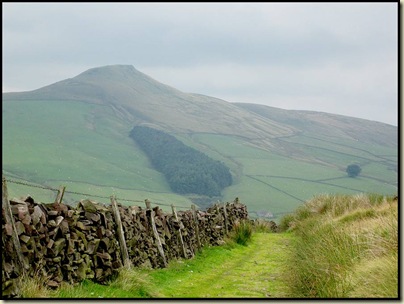 Today’s bridleways were a delight compared with some of yesterday’s; all good fun, especially the swooping descent on the edge of Macclesfield Forest to Trentabank.  Just beyond here I stopped for lunch at 2.15 at the Leather’s Smithy Inn.  They had no food, so I zoomed on down to join the Macclesfield Canal at Gurnett.

A leisurely pootle up the towpath to Marple concluded this enjoyable two day outing. 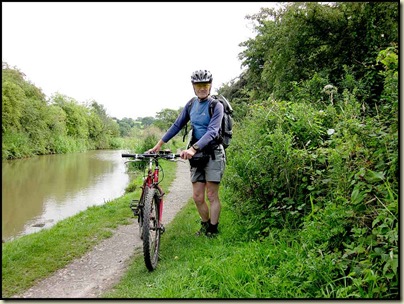 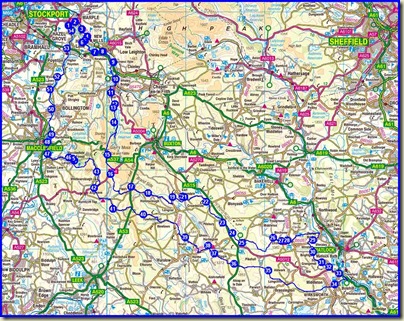 Don't you just love the place names? They're wonderfully evocative.

You must be quite fit. I'm knackered just reading your tales. Thank goodness the schools go back next week, I can get my boots back on, but I'll be at a far more leisurely pace!

My word you must be fit at the moment!