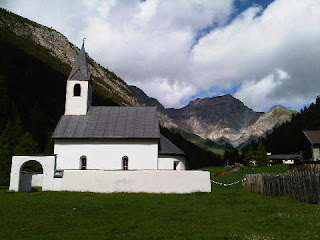 Route: Zernez – Susch – Ardez – Scuol – San Jon – Val S-charl – S-charl – Alp Astras – Passo da Costainas (2251 m) – Lü (Night: Gasthaus Hirschen) [As planned]
Distance: 55-60 km
Ascent: 1800 metres
Descent: 1350 metres
Time: 8.75 hours
Markus's sentence for the day:
"I am not The Boss; I am just The Coordinator."
From our window, once daylight had taken hold, I could see the mountains come and go. Outside, rain pattered in the puddles it had created on the flat roof. It was a day for Sealskinz socks and full waterproofs.
Breakfast at the Bäer (aka Bär) Hotel was a sumptuous affair, taking our minds off the hardships to come. But by 8.30 we were on the road again, splashing through the puddles on yesterday's muddy track.
On a positive note, we were heading downhill. Through Susch to Lavin, where we crossed to the north bank of the River En and rose gently on excellent cycle tracks through a series of picture postcard villages that would eventually lead us all the way up to 1700 metres before dropping steeply down to deposit us beside the river again at Scuol.
En route to Scuol we passed thus through Guarda, then above Ardez to Flan, where the prospect of coffee and cake drew us into the only café. We weren't disappointed.
A man on a bike, both covered in mud, flew past. We ventured back outside, the rain having eased to 'intermittent', for a final ascent before the plunge down to Scuol.
More bikers flew past. They were travelling light apart from the caking of mud (still only a thin veneer compared with the Calderdale Marathon!), but their presence - they were flying past every few seconds despite the fact that we (I?) were travelling at top speed - was somewhat disconcerting. They were in a race - The Swiss Naturepark Bike Marathon. The main event is a 130km off road ride, with over 4000 metres of ascent, but even though the winner takes only six and a half hours, he couldn't catch us. The short event, only some 50+km with 800 metres ascent, starts near Zernez and follows our morning's route. It was these people who were catching us. They looked very keen as they flew down to the finish at Scuol.
We had wondered all morning why crowds of people had been cheering us on. We had been leading the Swiss Bike Marathon!
After that the 1100 metre ascent to Passo da Costainas (2251 m) was positively peaceful, especially as the rain had stopped.
Lunch was taken at the hamlet and bus terminus of S-charl (pictured), at the end of a long dirt road frequented by numerous walkers and a few other bikers, including a man on a curiously clean orange bike who flew past as if we were stationary, before he slowed down and fell off.
After that, easy going on a good track then a narrow, slightly technical, path to the scenic pass, where we lingered for a while with a German biker.
Then a rocky descent - care needed, we had to dismount on some steep sections, led to a contemplative break in the sun (The Coordinator insists on these) before the final fast downhill section to our five roomed refuge in Lü.
A sociable evening and a filling spag bol washed down with expensive Swiss beer completed another excellent day.
I have to finish now as Markus has decreed "lights out".
Goodnight.

Next Posting - A Sunny Day in the Alps
Back to Index
Posted by Phreerunner at 21:16

Top photo! Leg's are turning to jelly just reading about the cycling, though.

>> We had wondered all morning why crowds of people had been cheering us on. We had been leading the Swiss Bike Marathon!

Are you not due a polka-dot jersey or some-such then? I'm sure your Coordinator will know...

Sounds like a great mix of tough days and comfortable (beer equipped) lodgings so far. Hope you enjoy some nicer weather at some point.