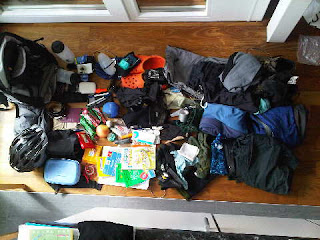 4.00 pm: A bit of background: this trip came about during some correspondence with our good friend Markus, the Austrian TGO Challenger, concerning his 'Caledonian Trail' on which I joined him for a few days in April.

"Do you fancy an Alpine journey in early September?" I had queried in passing.

"No, because I'm already going on a Transalp bike ride" was the response; "You're invited!"

So, after carrying out a small test on our local canals, I accepted the kind invitation.

Now, on a Wednesday afternoon in late August, I find myself rummaging through an assortment of gear in Markus's brother's flat in Dornbirn, whilst Markus gets his office work up to date and packs his own small bag. We are staying in hotels, so don't need much. But there does seem (see picture) to be quite a bit to rummage through!

Thanks go to Wolfgang - absent on a guided Transalp bike ride - and his wife Jutta - on holiday in Thailand - for the use of their well-appointed flat.

5.30 pm: Markus returns and we head off to collect my bike. It's seven years old but after being serviced earlier today looks new to me. Markus's friend (pictured in a recent posting) has sold it, so it's this new owner, "a friend of a friend" says Markus, who is lending it to me.

Then it was off to Gasthof Gutle, by the Rolls Royce museum, for a leisurely beer, before returning to town for more carbo-loading via pizzas at the Bella Napoli. With a van outside emblazoned with the words "BBQ eat as much as you can", we could have been...well, anywhere really.

A bit of rest is now in order as we have a longer day than expected tomorrow. The mileage has more than doubled due to the railway line between Bludenz and Schruns being closed, with the replacement bus service not taking bikes.

So there will be a sting in the proboscus?

Next Posting - Day 1
Back to Index
Posted by Phreerunner at 20:30

Sounds great. Have a good trip Martin. Look forward to your next post of double distance.
My derriere would be too sore if it was me.

Have a great trip! Looking forward to reading your posts from the road. I won't be (almost) crossing paths with you in Italy now. Martin B. can't make the Dolomites AV1 trip, so I'll be based in Arolla for a week instead (3rd-12th September), learning some alpine mountaineering basics. Should be fun!