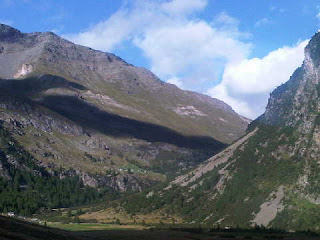 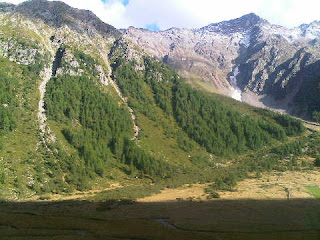 Route: Arnoga – Passo di Verva (2301 m) – Eita – Grosio - Sondalo – Le Prese – Fumaro – Baita Rezzalo (Night: Rifugio La Baita)
Distance: 40-45 km
Ascent: 1800 metres
Descent: 1800 metres
Time: 8.5 hours
First, thanks for the comments, and sorry about the delay in sending this. We are at one of those rare places in Italy with no 'phone signal. There is actually an internet connection, but so slow I've failed to log into blogger or identify 'BrextonT', who should be aware that I may be tagging along with Alastair for the Calderdale Marathon in much the same way as we tackled the Macc Half Marathon last year.
Last night's hotel occupied the eye of a hairpin. This morning both sides of our room revealed a wet road. A leisurely breakfast was in order, before we said goodbye to Hans and Danni, paid our bill (€74 each for half board plus drinks - fortunately not as much as advertised on the back of our door), and donned our waterproofs.
We seem to have developed a habit of starting at 8.30 and finishing at 5.00 (give or take), and today was no exception, though I fear it may have been had we taken the planned route over Passo della Forcola.
The rain hit as we descended briefly on a land rover track before turning up the scenic valley littered with information boards that leads eventually to Passo di Verva.
We were the only visitors today to the high valleys either side of the pass. Perhaps this was due to the sleety rain that was falling as snow above about 2200 metres.
Luckily the storm subsided as we reached the pass, where on 10 July 2010 a memorial to the Italian soldiers of WW1 had been erected. It was still very shiny!
I'd enjoyed the ascent, despite the cold rain, as I was tucked up nice and warm in various layers of gear, and the not so steep, but rather gravelly track seemed like home ground. Markus lagged behind, for a change. He says he was optically challenged.
There was a fair amount of bird life, with Pied Wagtails, Chaffinches, Wheatears and various larger 'brown jobs' in evidence, though yesterday's fly catching Martins and similar were, for obvious reasons, not around today.
The 500 metre descent to Eita was also fun, over equally rough ground, but the subsequent 1100 metre drop to Grosio was a bit of a nightmare for me. The most challenging hour of this trip. It should have been quick and fun, a rapid blast down damp tarmac. But my newly serviced rear brake didn't play ball. It has all but failed and needs attention from a tool that we don't possess.
Anyway, whilst Markus thinks I could have been braver with the front brake, that doesn't have an anti-lock system, so I took extreme care.
Arriving in one piece in Grosio, we headed straight to the friendly Albergo Sassella (a bikers hotel) to share a pasta for lunch.
Outside, one of a group of motorcyclists dropped his bike, much more of a tank than mine, onto a car. I was impressed that instead of riding off, the bikers tried to seek out the car owner, and left their details.
Having by-passed our planned route over Passo della Forcola due to the weather, which actually improved after Passo di Verva, we now set about tackling a 1200 metre ascent to La Baita (www.rezzalovacanze.com). A main road took us slowly up, as we battled with a head wind, to rejoin our planned route at Sondalo, then on to Le Prese, from where we took a minor road for 7km to Fumero. It was steep and zigzagy for 600 metres. Markus went ahead. He wanted to test his ability to cycle all the way to La Baita, as he had failed on a hot day in June last year. He succeeded, but I pushed the final 400 metres of ascent from Fumero, unaware of any 'challenge'. It was a lovely sunny afternoon, but cold, as was Markus after waiting for me for 30 minutes.
Alessandro was waiting outside for us on his sunny verandah sheltered from the cold wind. We are his only guests tonight in the waterwheel powered 20 bed rifugio.
A beer went down well. Markus was delighted to find a hose to wash his bike, and gleefully accepted Alessandro's offer to wash our clothes.
He assured us it will be clean and dry by morning, then fed us with a mixed salad, mushroom risotto, succulent chunks of pork ribs with courgettes, and Italian cake. Our best meal to date perhaps, and probably the cheapest.
It's very jolly here, albeit there are just the three of us. The rifugio is in a splendid setting at around 1900 metres. Today's images were taken this evening, from the front door, shortly after the sun had disappeared over our horizon.

Next Posting - Day 6
Back to Index
Posted by Phreerunner at 13:12