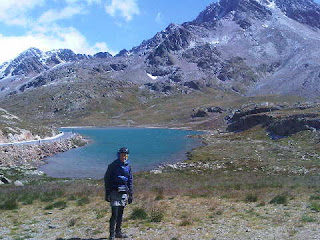 Route: Val Rezzalo – Passo dell´Alpe – Passo Gavia (2618 m) – Pezzo – Ponte di Legno - Passo del Tonale – Ossana - Dimaro (Night: Jolly Bar/B+B)
Distance: 60-65 km
Ascent: 1550 metres
Descent: 2650 metres
Time: 8.0 hours
The day dawned cold and clear. A dusting of fresh snow on the nearby mountains of the Stelvio National Park remained as evidence of the onset of Autumn.
Alessandro provided a good breakfast, then we kitted up. My 'leg warmers' went on for the first time, fitting neatly under my cycling shorts. They had been purchased in deference to Markus's kit list. They stayed on all day. Markus hadn't brought his. "I've not needed them on any of my previous three Transalp crossings" he explained, "but I've never been as cold on any crossing as I was today."
We started off, now with the benefit of a map, along a land rover track, heading up a further 600 metres to Passo dell´Alpe. I tried to cycle, but after 50 metres or so it was just too steep for me. Markus kept going for a bit longer, but was soon pushing, just a bit further up the hill.
So including yesterday's final 400 metres, I had now pushed The Tank up nearly 1000 continuous metres. Markus seemed surprised to hear that I hadn't enjoyed it. I realise that some pushing is necessary on this sort of trip. But 1000 metres? It would have been great in the other direction!
The short descent to the Gavia road would have been fun with fully functional brakes.
That concluded our off-roading for the day, as Markus subsequently deemed it too cold to venture over Bochetta di Montozzo.
No brakes were needed for the scenic 350 metre ascent to Passo Gavia (2618 m), where Rifugio Bonetta provided welcome cappuccinos, and a helpful lady who was guiding a couple of German mountain bikers explained the problem with my brake. I have accidentally got air into the system, and it needs a special machine to remove it. She kindly explained how best to ride to handle the problem.
Enticing paths to nearby summits; jagged peaks which on the map are riddled with red dashed lines; this area is one to visit with a pair of walking boots and a via ferrata kit. It looks great. Today's image, entitled 'Dressed to Kill', was taken at Lago Blanco, by Passo Gavia. Unlike my companion, the camera shy Austrian fashion guru, I was very warm thank you...
The 1300 metre descent to Ponte di Legno, mostly down a narrow road, was negotiated slowly, but safely. Near the bottom we sat outside a nice little restaurant and stuffed ourselves with spaghetti carbonara, wolfing it down as fast as we could to avoid it joining the Fanta can on a trip to the nearby river, borne by an icy blast from the gusty wind. Why didn't we eat inside? It was sunny...
We passed a little above the main part of Ponte di Legno. Down below a puff of smoke increased in intensity; it started to billow - a dark grey plume. At the source, in the middle of the road, flames leapt high into the sky. Fire engines rushed to the scene. A helicopter arrived. As we rose up the Tonale road our view became clearer, partly due to the emergence of my binoculars from the depths of my bag. Two thirds of a bus were sitting astride the blocked road, a grimy black smudge marking where the rest of the vehicle had once been. We hope everyone got out before the fire took hold.
The road up to Passo del Tonale, where an ugly ski resort reminded me of Andorra, was busy but wide enough not to be unpleasant, especially as it rose only 600 metres over a distance of 8km.
The 900 metre descent to Ossana, over more than twice that distance, was down a moderately gentle gradient, so quite enjoyable even with dodgy brakes. Then half an hour along the busy main road to Bolzano and Trento took us to the village of Dimaro, from where an off-road cycle route is on the agenda for tomorrow (I'm looking forward to that!).
I came across Markus, halted outside a B+B, chatting to a mountain biker. This chap, Robert, seemed to have connections with the B+B, and we were soon installed in two very nice double rooms, but not before Markus had discovered a hose pipe and assiduously cleaned his dusty bike. My bike is also a bit grimy, but I obstinately declined to show any enthusiasm for cleaning it, I just don't see the point in doing this before the end of the trip. I'm not sure whether Markus understands; perhaps I'm letting down the owner of The Tank by failing to wash it at every opportunity, though he can rest assured - it'll be returned fully cleansed!
The 'Jolly' B+B even got us a discount at the Dolomiti restaurant, purveyors of fine pizzas, Hacker-Pschoff beer and cappuccinos of the liquid and frozen varieties that concluded our Transalp proceedings for the day.
Thank you, SAHH (Stay At Home Hazel), for your comment; I hope you and the pixies have a nice day out tomorrow.

Next Posting - Day 7
Back to Index
Posted by Phreerunner at 22:27