Friday 3 September 2010 - Chilling Out in Riva/Torbole 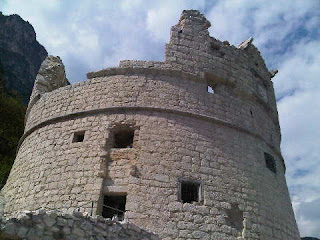 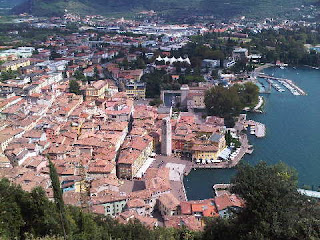 From my bed I could see green hillside merging into grey cloud that concealed the summit of Monte Baldo. But as the senses awakened, sunshine on the Pregasina hillside indicated a fine day, with just a touch of cloud on the highest tops.

A full breakfast was followed by a trip to a nearby bike mechanic, where 30 minutes and €20 later the rear brake on the bike I will never ride again was as good as new.

After enjoying a coffee with Markus in the harbour area whilst on bike repair duty, he took to the pool and I strolled into Riva.

The day's exertions were restricted to the 150 metre ascent to the Bastione (pictured, along with the view down to Riva from its balcony) along a pleasant winding path, but sufficiently energetic to warrant a beer at the top. A via ferrata route starts near here, but I had no equipment.

Back at Torbole by late afternoon, Josef and Elisabeth had arrived. They had driven all the way from Dornbirn this morning to enjoy an afternoon beside Lago di Garda before transporting us and the bikes back to Dornbirn tomorrow.

We enjoyed a pleasant, albeit uneventful (unless something happened in Voralberg German that I didn't notice), evening with them.

Next Posting - Going Home
Back to Index
Posted by Phreerunner at 21:52