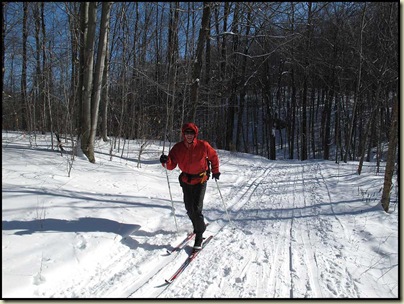 Today was apparently the coldest 23rd January in Ottawa’s records.  Sue and Helen went to the cinema and enjoyed a ‘Stammering King’ movie.  Ken and I braved the cool weather in Gatineau Park.  The thermometer stayed at minus 23C for the duration of our three and a half hour excursion.  It was around minus 30C after taking account of wind-chill.

We set off from P12 car park at Meech Lake soon after 11.30am.  It really did feel cool, even with a windproof Paclite over the t-shirt and ‘Vapour Rise’ smock that had kept me warm yesterday, but we soon warmed up as we ascended Trail 40 (pictured above) all the way to Ridge Road.  It always surprises me that feet stay warm with one pair of old socks in these cold conditions, but hands are hard to keep warm however many pairs of gloves are worn.

In less than an hour we had turned off Ridge Road, down Trail 2, and had reached Western Cabin (or ‘Lodge’), which if this report is true has moved about a bit before coming to its resting place here.

A chilly outhouse lurks nearby. 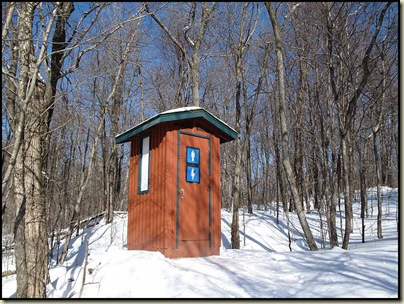 A large wood store is necessary for all such cabins. 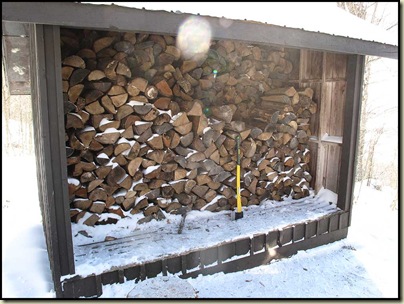 The view from Western’s window is extensive – over the Ottawa River and many miles beyond. 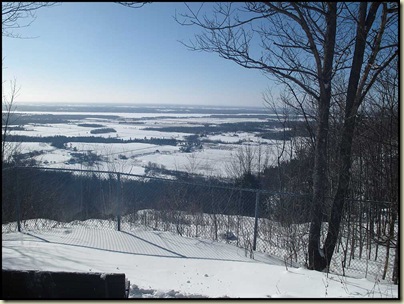 It was steamy inside the cabin, where we were joined by Tim, Sophie and Claire, who’d arrived late at P12.  We hadn’t wanted to wait for them there, preferring the warmth of the cabin. 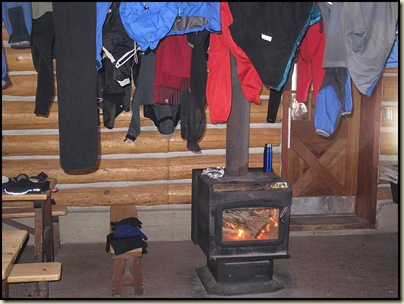 The five off us enjoyed the return journey together.  Here we are, setting off from Western.  There was no sign of any cyclists, Canadians being very law abiding. 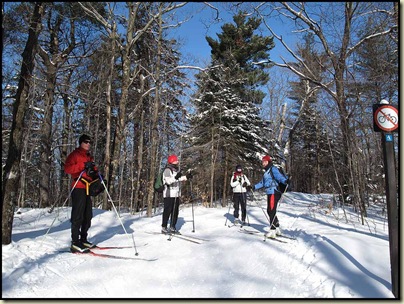 Our route back to Meech was via trails 1B, Ridge Road, 3, then back country trails 20 and 21, before joining trail 2 for a steep descent to trail 40 and the final plunge back down to P12. 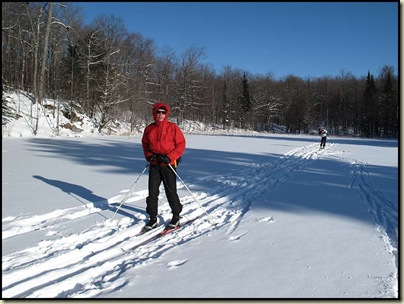 Tim demonstrated that it was still at least minus 23C. Luckily there wasn’t too much wind-chill. 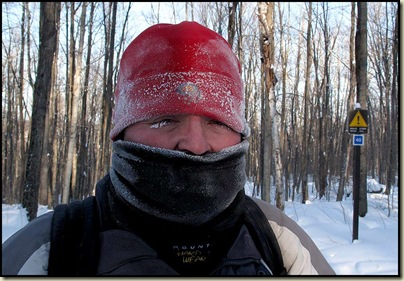 Our 14km route had about 400 metres of ascent, as did yesterday’s 20km route.  But due mainly to the ungroomed back country trails it was slower going and took the same length of time – about 3½ hours.

I’ll have a day off tomorrow.  My feet blistered yesterday.  An inspection of my shoes revealed they were worn out, so today I wore some of Ken’s (shoes, not feet).  He had discarded them.  “They gave me blisters” he explained.  Guess what!  They gave me blisters as well…
…. and they aren’t even Inov-8s!

Looks great Martin. You really don't like Inov8s do you? I'm not sold on them either as it happens!

No Gibson, my flirtation with Inov-8s was brief but disastrous, with both shoes and feet enjoying a very short and rather wet 'half-life'!