Ken left early to do some skate skiing training with a gang of fitness freaks.  Not for me….
….I have no skate skis.

Leaving Sue to recover from the journey and enjoy a stroll by the Ottawa River, Helen and I headed across Ottawa to P19, the furthest of the car parks that we use for access to Gatineau Park.  It’s a 45 minute drive from our abode in Woodroffe Avenue, across the river from Ontario and into the French speaking region of Quebec.

The car was very cosy.  It has heated seats.  But one of the array of dials on the dashboard conveyed the message that outside it was minus 19C.  That’s fairly cold, even by local standards.

We managed a speedy transition from the car to trail 50 and headed off along the easy route past Lac Philippe to Herridge Cabin.

The sun shone as we passed the junction with trail 51. 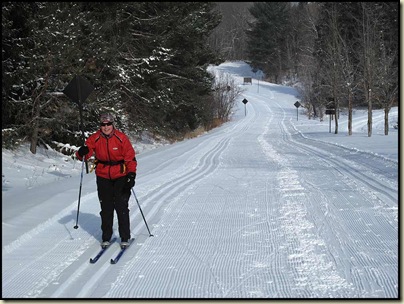 The thick woodland by Lac Philippe conceals a lovely undulating track, but given the paucity of snow and the thickness of the tree canopy, leaves from which had been released onto the track, it was a case of ‘proceed with care’ around here.

Despite the ‘leaves on the track’ problem we reached Herridge Cabin, an old farm house 10km from the road head, in less than an hour and a half after a gentle ski that was most suitable for a first such outing for nearly a year.

I was wearing two hats and three pairs of gloves.  [That’s to please Gayle, the statistician amongst the congregation.] 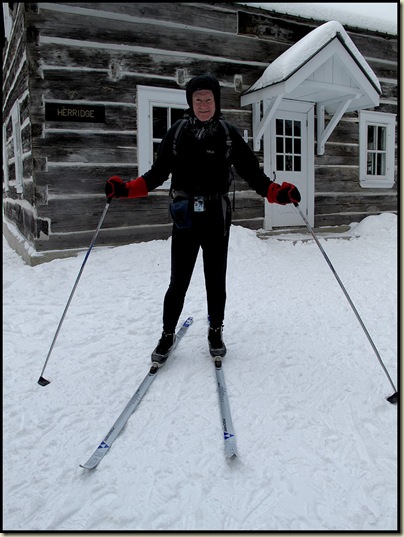 Herridge is a sturdy two storey cabin that’s usually crowded on a Saturday lunchtime.  However, due to today’s cold weather there were very few people there when we arrived. 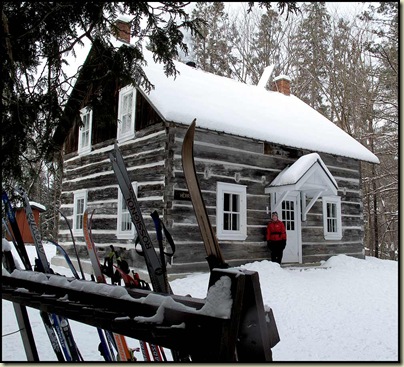 But the place filled up.  It became cosy.  The top of the cast iron stove filled with foil lined sandwiches, toasting on the hot surface.  A queue formed of folk wanting to toast the butties that they had assiduously prepared with the butter on the outside of the bread.

A Hairy Woodpecker chomped away at the ample supplies on the bird table.  Five Blue Jays failed to unseat it.  Chickadees flitted on and off the feeder whilst a Nuthatch hopped down a nearby tree trunk.

Then it was out into the cold air again.  My hands never did get really warm, and a toe and a heel and a knuckle were all suffering from the effects of wearing rarely used shoes and gloves.  The legs were willing though, and the return journey to P19 was soon accomplished.   By the time we had finished it was overcast, with snow flurries.  Yes, it can snow at minus 20C!

Thus concluded my first ski of the year – 20km in about 3½ hours including 45 minutes at Herridge.  Very pleasurable, as was the evening, spent with Ken and Helen and a guest of honour, Lucy, who lives on Victoria Island and who kindly provided employment there for my daughter in her gap year nearly ten years ago.  It was good to meet you, Lucy.