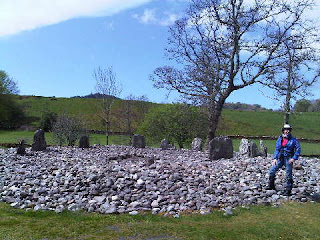 The Grey Gull treated us to a fine breakfast. This hostelry proved to be an excellent starting point with a great group of people. Thanks go to the Australian management and all their staff for making everyone so welcome.

We signed out and set off at 9am, with Sue in 'happy mode' because I'd arranged a flat walk along a canal towpath, as she had requested.

The Crinan Canal was opened in 1801 as a short cut (some say "the most beautiful shortcut in Britain") for lazy sailors who couldn't be bothered or were too scared to sail all the way around the dangerous waters of the Mull of Kintyre. Thomas Telford was involved a few years after that, when the original construction proved inadequate (ie - the canal collapsed). His attentions must have worked - today, mergansers were in charge of the placid waterway, some 200 years later.

We soon came upon the Cairnbaan Hotel, which suddenly and unexpectedly had to open its coffee shop. It was a very jolly group of Challengers who supped coffee and nibbled some remnants of shortbread, helped by the fact that many of us knew each other from previous trips. We even discovered that some of us have mutual friends, such as Gilly Hunt, who will be on our next trip - she lives down the road from Geoff Gafford, who was with us today together with Frank and Bert. Hello Gilly!

After this, most of the others were heading directly towards Carron Bothy, whilst Sue and I continued alone along the towpath towards Crinan. We saw no further Challengers today.

At Islandadd Bridge we headed away from the canal, into the Moine Mhòr, or Great Moss - a flat area that leads into Kilmartin Glen, an area rich with history. The glen has one of the most important concentration of Neolithic and Bronze Age remains in Scotland. There are more than 350 ancient monuments within a six mile radius of the village of Kilmartin, with 150 of them being prehistoric. Monuments include standing stones, a henge monument, numerous cists, and a "linear cemetery" comprising five burial cairns. Several of these, as well as many natural rocks, are decorated with cup and ring marks. The remains of the fortress of the Scots at Dunadd, a royal centre of Dal Riata, are located to the south of the glen, on the edge of the Great Moss.

Cup and ring marks or cup marks are a form of prehistoric art, consisting of a concave depression, no more than a few centimetres across, pecked into a rock surface and often surrounded by concentric circles also etched into the stone. Sometimes a linear channel called a gutter leads out from the middle. The decoration occurs as a petroglyph on natural boulders and outcrops and also as an element of megalithic art on purposely worked megaliths such as the slab cists of the Food Vessel culture, some stone circles, and passage graves.

But I digress. We paused at length at the 5000 year old Temple Wood stone circle (pictured above), and spent a while exploring the interior of a burial mound. Luckily for Andrew W, his route doesn't pass this way....

En route, the sad remains of Poltalloch were past. The sad tale of the rise and fall of the Malcolm family's fortunes is reflected in the crumbling masonry of this once stately building. The nearby church, however, remains intact and is worth a visit - it sports some lovely stained glass windows and Malcolm memorabilia.

Hastening on to Kilmartin, we joined David and Janet in their lovely new garden. They moved here on Wednesday, so we provided our last two pieces of shortbread by way of a house warming present. Jim joined the party and was placed on wardrobe carrying duty. Thanks for the tea + biscuits, you two.

Alan Hardy had predicted a boggy ascent of Beinn Bahn, but it really wasn't bad, with the reward of a summit 'brew stop' out of the wind with great views back over Kilmartin Glen to the Paps of Jura, and on to Loch Awe, most scenically placed in the evening sun, with the snow-capped summits of Ben Cruachan glittering behind the loch.

Then we strolled pleasantly down to Ford, where Alison J soon whisked us back to Kilmartin Hotel for a good meal, and a most enjoyable evening. I've known Alison for 40 years or so and hadn't seen her for a while, so it was great to catch up. She sends her best wishes to those mutual friends who read these pages, as do David and Janet.

Alistair, Lyn, Martin R and Alan R - thanks for your comments. We noted how well Lynsey was looking in Glasgow, Alistair - we hope she has a great crossing.

That's all for now, apart from thanking Alison for her excellent B+B service - more than enough, I suspect, though given a lack of 'phone signal you may not receive it for a while.

Well done Martin on reporting your first day so promptly - and in such detail! I don't know how you find the time! I'm sitting at home, gnashing my teeth at missing out, so it's great to get a first hand account to read so soon.
(We had the same start in 2008 so I can imagine exactly where you are.)

Hi Martin - I'm following you with envy whilst doing excruciating exercises on my knee four times a day. I'm glad to see you got off to a good start, and the Blackberry blogging is working ok.

I enjoyed that Martin. Challengers leaving Shiel Bridge weren't so lucky with the weather, but should fair better today. Keep up the good (posting) work!

I am seated and following this walk with keen interest. I do hope we get lots of photos from you Martin. Fine writing BTW.

Excellent write up Martin. Good to know what I'm missing - I think! Hope the rest of the trip goes splendidly. ATB Phil.

Sounds like you are on a lucky route so far. M and g seem to be having a rough first day.
We went up Wetherlam today and it was superb.
Great write up Martin.