So, the day finally had to arrive…

“Time for some TGO Challenge training” declared Sue, suddenly becoming aware of the imminence of our forthcoming 250 mile walk across Scotland.

“Let’s take a leaf out of the Fenlanders’ book”, I suggested.  “Some of them have managed to do it quite a few times, and I think the secret of their success lies with their training regime.  That means the training must take place somewhere flat, and beer and food need to be involved.”

We duly selected Middlewich, in the flattish plains of Cheshire, as a suitable venue.  It’s not far away from home, and the short drive soon found Sue and me admiring the anciency of Halfpenny Hill, as this spot was apparently known until 1309. 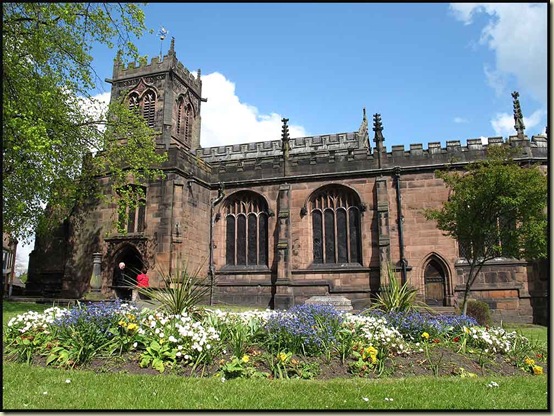 “Halfpenny Hill!” Sue exclaimed.  “You told me it would be flat.”

My solution was to guide her down to the towpath of the Trent & Mersey Canal.  “It doesn’t get much flatter than this” I suggested.

“What if I fall down a hole?” she jested.

Anyway the day was ideal for a stroll along the grassy towpath.  We noted some lovely old signs along this 92 mile stretch of waterway. They date from different periods – the first we passed was dated 1813, the next one, very similar in design, was from 1977, perhaps a replacement when the waterway was refurbished.

The canalside forget-me-nots were a vibrant blue on this sunny day. 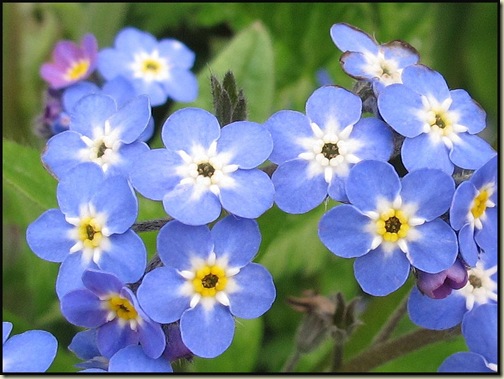 Posh new signposts eliminate the need for the mental stress of metric conversions for the good people of Middlewich. 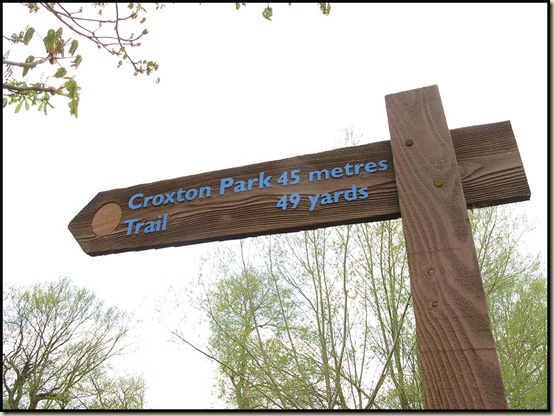 The stroll north along the towpath was exceedingly pleasant. 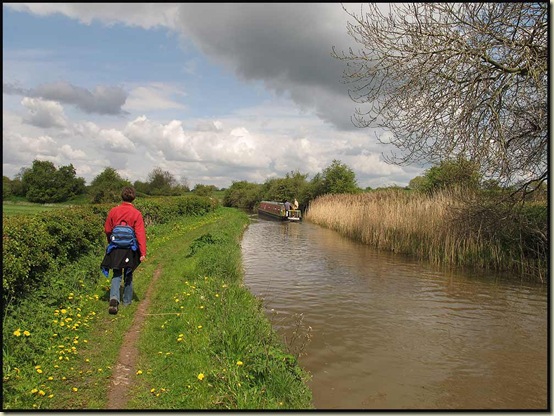 "Hello!" exclaimed Gerry, as we chanced upon what could only be described as a Motley Crew. 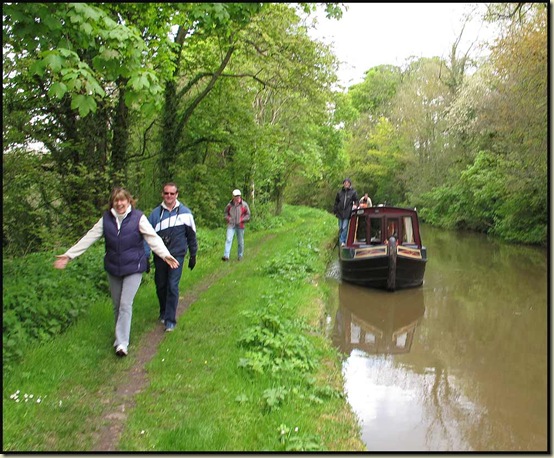 By now, Sue was feeling quite tired from the 4 km she had managed to cover, so she blagged a lift back to Middlewich.  I felt obliged to stow away with her.

We passed quite close to this heron.... 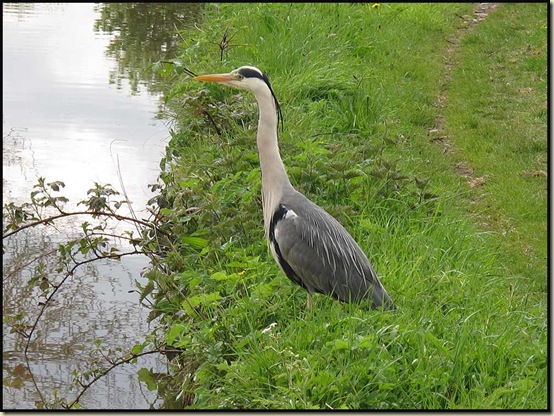 Lovely reflections were admired as we glided along, though the water was a little on the brown side due to lots of barge propellers churning up the mud.

We had arrived just in time for 'elevenses'.  Sue’s voracious appetite had perhaps been anticipated? 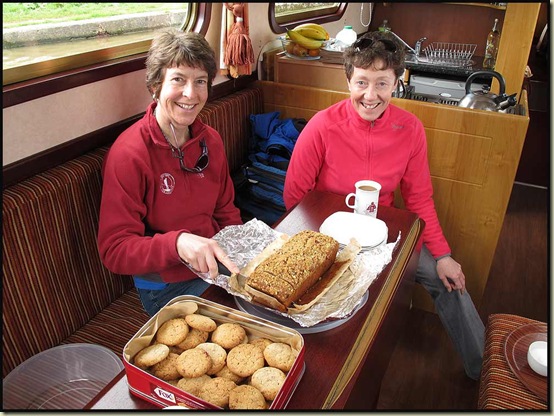 A short queue was encountered at Middlewich's 'Big Lock', and with Robert being assisted by Roger, the boat was always going to look a little 'misdirected'. 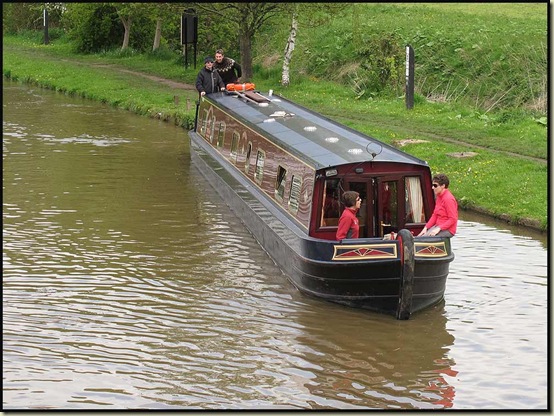 ...but it slowly wandered into the Big Lock. 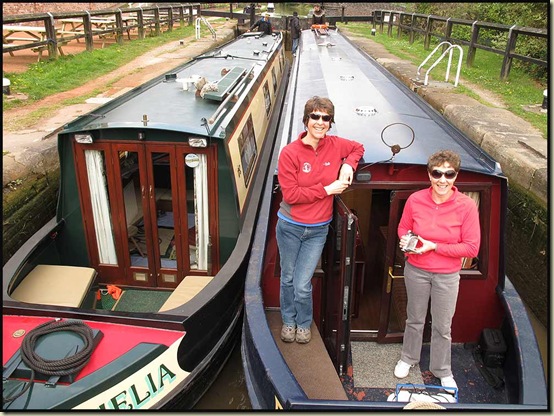 It was a slick operation. Everyone had a role, especially Stewart…

We were impressed by this pristine bench in Middlewich.

Louise took on the role of 'Water Diviner' - it seems the boat required regular drinks of ballast to prevent it rising up and flying away.

”Look what a mess you’ve got us into now, Robert!”  Louise was angry.  “It’s all that ballast you put in” retorted Robert, “it’s made us go down.  I think we’re trapped!” 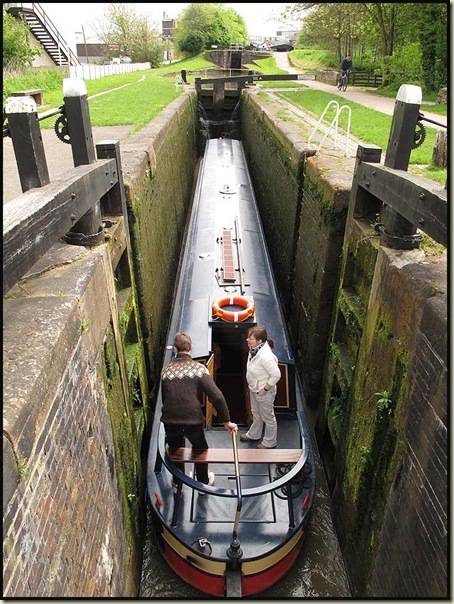 Eventually, Gerry found a gadget that would release the boat from its trap, albeit she slipped a disc in her desperate attempt to ‘un-lock’ her friends. 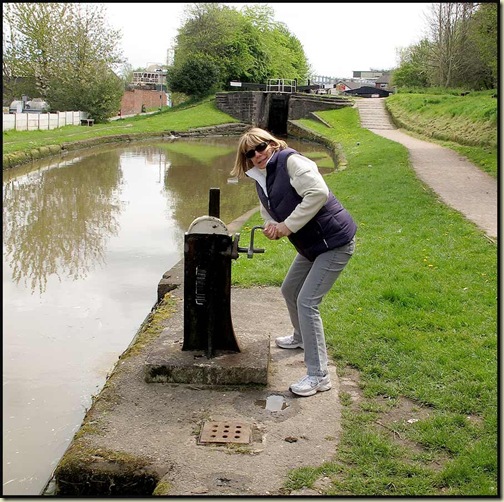 It was indeed a Motley Crew that was trying to manoeuvre the good ship Phoebe through this set of locks at Middlewich.

After a while Robert guided the old boat gently into the bank, and Phoebe took a break for a while.

You may recall that ‘food and beer’ were a prerequisite of this training walk.  I’d been a little apprehensive as I’d forgotten to bring either of the said items, but luckily this bunch of naval cadets had their priorities quite well sussed.  Lunch was quite a lavish affair… 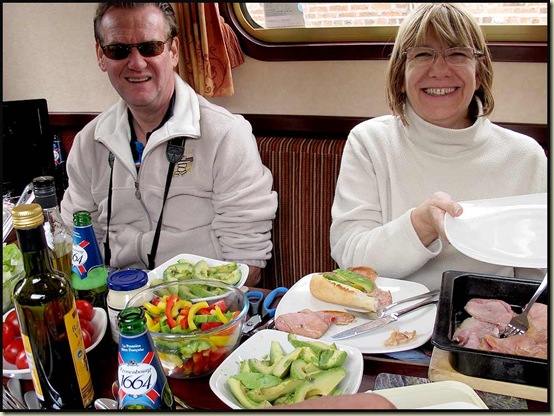 After lunch, at last, Robert got the boat straight, pointing it neatly towards the bridge ahead. "But our route is under the bridge to the right" shrieked Lyn, having finally managed to locate our position on the map.

The turn down the Middlewich branch of the Shropshire Union Canal took us under a rather low bridge and through a series of challenges that readers will have to visit the slideshow to discover.

Eventually, clear water was reached.  "Hey up there...where are we?" 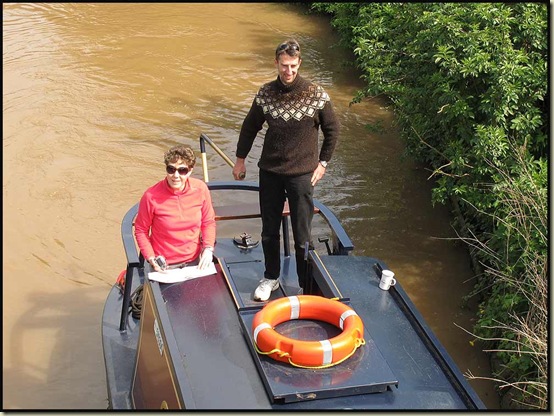 "I'm down here, having a shower" came a weak voice from the business end of the ship, which seemed to have entered another culvert. 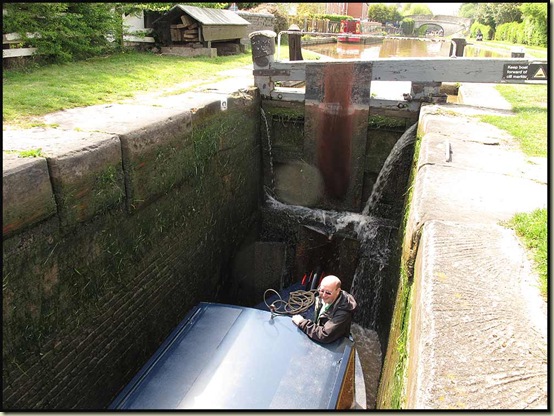 This branch of the Shropshire Union Canal comprises a lovely rural section of waterway.  Our passage caused havoc with a family of ducks - mum and 12 chicks.

Soon, with Stewart at the helm, Robert knew the safest course of action for the safety of the whole crew.  He abandoned ship…

...so did Roger, who had nearly drowned in his bid to escape when Stewart grabbed the tiller. 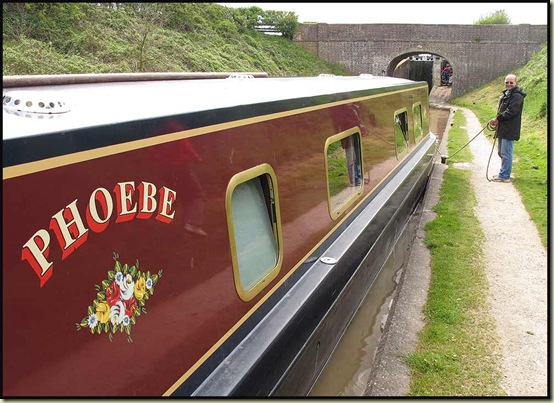 “We are getting a long way from Middlewich” moaned Sue “I want to go home.”  So we did.

Here’s today’s  training ground.  We walked from Middlewich to somewhere near Bostock Green, then after cadging the lift, we walked back from half way between Middlewich and Clive Green.  About 6 km in total.  “Excellent preparation” Sue agreed, adding “I trust you’ve planned a TGO Challenge route beside a canal, and no more than 6 km a day…” 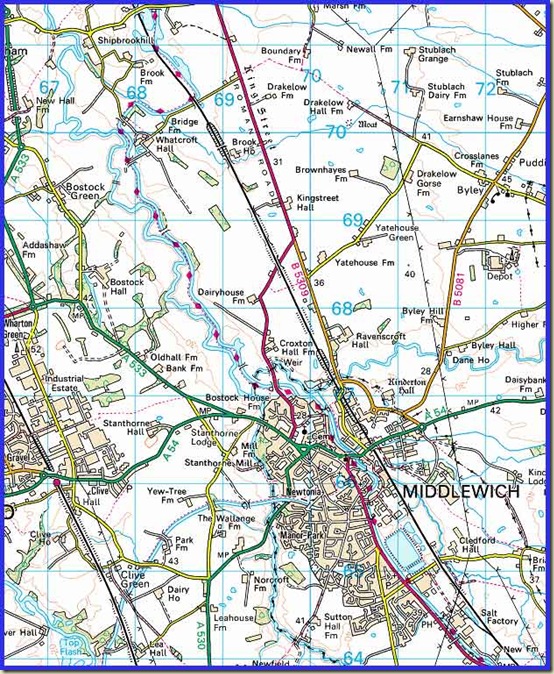 Our sincere thanks go to the entire crew of Phoebe for putting up with us for so long!  And for catering for Sue’s voracious appetite.

Robert’s alternative (fictional?) account of the entire trip can be found here.

Excellent training programme. You can tell Sue has it all sussed.
Is Phoebe a rental Narrow Boat? I'm sure we have seen it up here sometime during the year.
Does poor Mike not feature in this years crossing?

Excellent indeed, Alan. Sue feels really up for it now!?!
Phoebe is a rental boat, so you may well have seen her up your way.
Poor Michael is giving the TGOC a rest this year. Besides, he wouldn't want to come with me again. I think that Sue is the only person I can rely on to be a serial victim....

Your observant followers will have noticed that your training route was all downhill! You started your walk walking down the canal and lost height walking past the locks You then hitched a lift on the boat though the locks before walking downhill back to Middlewich! The section to Barbridge was very pretty and would make a good walk. Finding a suitable morning was interesting and involved us reversing the boat a hundred yards so it was pointing in the right direction for a quick getaway in the morning. Had an interesting encounter today with an “experienced boater” who insisted wrongly that the first tunnel we entered had a timed entry so he started to go through when we were already a good way into in the tunnel. Roger carried on regardless and the situation was solved by copious use of the horn! Mild pleasantries were exchanged when we emerged and the other boaters who were waiting blamed us for going into the tunnel we a boat was already in it! The incident did not spoil another good day and the conclusion of an excellent trip. It was good to see you and Sue and we look forward to reading your TGO postings. I am sure the training will have been the fine polishing that would have been required to ensure you are both in peak condition

Thanks Robert. Sue is still on a 'high' as a result of over-indulging on Stewart's Mars Bar Cake. I think that should get her across Scotland without much need to refuel. Why didn't I mention that in the posting?!
Sounds like you had an interesting tunnel experience!
Thanks for the training opportuntity. Hmm, downhill all the way! Even the Fenlanders might struggle to achieve that!

Take care of him Sue. And don’t you be carrying all the gear. You have enough to carry with the responsibility.Ha.