Tour of the Oisans - Getting to Bourg d'Oisans 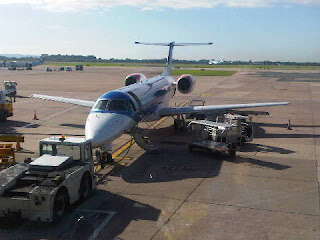 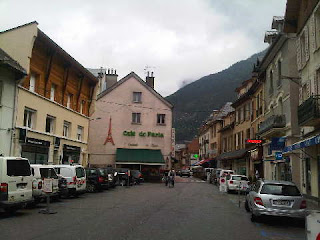 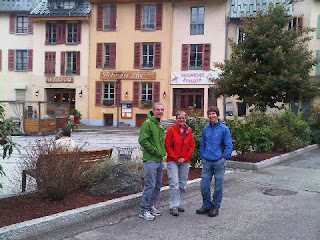 Thanks go to JJ for taxiing us to T3 at Manchester for a leisurely 10.10 departure on our BMI flight to Lyon.

We hope you enjoy your trip to Spain, JJ.

Hopefully JJ will be providing further commentary on his own exciting activities at adventures-with-jj.blogspot.co.uk/

The little Embraer 135 got us safely to Lyon, where it was cooler and cloudier than in sunny Manchester.

Susan and Roy duly appeared on time from the direction of Zurich, and the 3pm bus to Grenoble that we'd booked ran smoothly and on time.

Grenoble bus station, in rain, was the scene of some confusion as we queued for 25 minutes to get tickets for a bus to Bourg that we could just as easily have got from the driver. Anyway, we caught it in the nick of time, then spent the next 45 minutes in Grenoble's friday afternoon rush hour. It's not a pretty city.

Racing driver tactics, supported by blaring raucous sounds from the bus radio until reception faded, enabled our driver to recover 15 lost minutes, and by 6.15 we had been dropped off in Bourg d'Oisans more or less outside Hotel des Alpes, our chosen lodgings for the night.

A stroll around Bourg revealed a rather damp Alpine village, pictured, and Roy, Susan and Sue posed for me outside the hotel. The rain, and the fact that it was well past beer o'clock, soon drove us indoors.

Ken, who had travelled from Ottawa yesterday, materialised an hour later having repeated our bus ticket queue scenario in Grenoble, and our now quorate international quintet happily chomped its way through everything that Hotel des Alpes could throw at us.

The weather hasn't quite realised that we've arrived. It's raining hard, and occasional glimpses above us reveal lots of fresh snow at low levels. Just as well that we start walking tomorrow, and not today...

Gibson - have a great trip - I'll catch up with your own postings in a couple of weeks.

Alan R - shame about the rain in Gairloch, but hopefully it washed the midges away!

The picture of Sue is from five years ago - you'll recognise some more familiar clothing over the coming days...

Helen - I'll get back to you in a couple of weeks when we've returned from the Écrins.

Next Day
Back to Index
Prologue
Posted by Phreerunner at 20:53

Thanks for the update, hope you're all having fun.LOLH

No! That cannot be 5 years ago, it looks like yesterday.