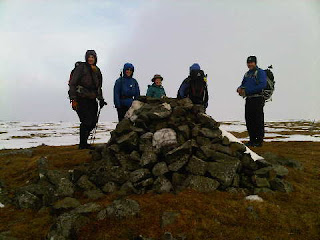 On a cloudy (500 metres cloud base), calm and mercifully dry day, seven of us chose this gentle hill for today's Corbett bagging exploits. Some are pictured on the summit.

Others went up Glen Lyon to bag Meall Buidhe.

One slightly insane member of the club went up into the cloud to bag the entire Ben Lawers ridge. The ghost of Culdees must have got to him! He got as far as Ben Lawers - four Munros.

Our own ascent was uneventful, subject to the obligatory sinking up to the hips in snow episodes (mainly Margriet). The only other inhabitants were a large herd of red deer and a pair of Black Grouse. Later we saw a friendly stalker who explained that the gunshots we'd heard were simply a check that the guns were working. We assume the pheasants laid out on a table bore no connection.

We were jokingly accused of chasing the deer away, but I think we beat them towards the stalkers and it was a group trying to learn ice axe skills in a safe place that scared the deer.

Adjournment after our 18km stroll (750 metres ascent, 7 hours) to the Kenmore Hotel located Bill and his newspaper and tales of his near demise in the local woods. A most pleasant indulgent interlude.

Then back to Culdees for hot showers and a cramped dinner.

The weather forecast is great for next week. But not for tomorrow. So we'll probably hit the road to Timperley earlier rather than later.

Sent using BlackBerry® from Orange
Posted by Phreerunner at 19:50

Great stuff.
We saw that large herd of Deer too. It was a special sight for us as they swept down the glen and across the burn. One we will never forget.
Its not a bad ridge over to Lawers. We didn’t have time to do it all but we made a mental note to do it one day.
Kenmore, lovely spot and a nice place to finish.

Sounds like a good holiday!
Familiar names from past family holidays.
Love to you both and a happy birthday to Sue for next Sunday from Rob, Chuck and Margaret( says hello and enjoys hearing from you).
LoveXXX

Actually, Alan, there are several herds of deer hereabouts!
Kenmore Hotel was indeed a good place to linger.

Dot & Co, thanks for those good wishes. I hope you told Margaret that Polly is still in very good humour...

The blog about your tgo route from feb18 seems to be lost in space. Do you know where it went ?

Theo, the TGO route posting was simply an update to my 25 January posting. We've replaced our computer and the Windows Live Writer now installed appears not to recognise adjustments to postings made through WLW before the change as such. This was the first such 'adjustment' so in future I'll use a different method to avoid confusion, though even if I backdate the amended entry and delete the original it replaces that may still confuse people using Google Reader. Sorry about that.
You have a stunning and challenging TGOC route, BTW!

Looks like you had a fun week but this week would have been better for weather. The hills are looking absolutely stunning!

I've had some great weeks in Scotland in February. It was actually a toss up between starting or ending our holiday in Aberfeldy last weekend. We should have started there! It's sunny here in Timperley as well just now.
Never mind, we had an excellent week.