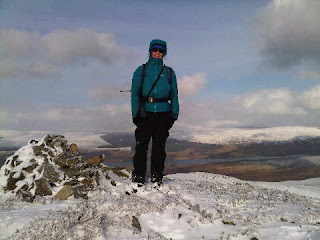 The sun shone for our third ascent of this 601 metre hill just to the south of Bridge of Gaur. It's a good 17km circuit with over 500 metres ascent, taking about 5 hours. Sue is pictured on the summit.

The snow line was soon reached, and we chatted for a while with a chap who was preparing the ground for a new plantation. He had a lovely snowball chasing black dog.

The wind seemed to ease as we got higher on the ridge. The going became easier. The sun was out. We enjoyed tea on the summit.

An abrupt descent through deep, snow-laden heather brought us fairly quickly to the track by Allt Camghouran, beside which we lunched at the cairn erected in memory of Alex Menzies, Shepherd. Later another shepherd, Ewan, drew up beside us and related the events of the sad day in 1990 when 62 year old Alex expired whilst clipping sheep at a spot near where the cairn has been erected.

Ewan offered to show us the local fox covens, and told us we should keep our eyes skinned for a golden eagle that sits on a nearby fence post, otters that swim in the loch, pine martens that are 'everywhere' and numerous other types of wildlife. We explained that we had seen a bullfinch! Actually, we've seen quite a bit of wildlife on this trip, including a red squirrel and a tree creeper in Simon's Braemar garden, hundreds of red deer stags, a dipper, and all manner of small birds such as wrens, robins and a wide variety of tits and finches.

Back at 'The Middle of Nowhere' by 3pm, we've had a most relaxing afternoon.

Sent using BlackBerry® from Orange
Posted by Phreerunner at 18:26

What a nice day. Good to talk to local people and find out what's what.

Thought you might try out Sue's new phone to send a blog.

I'd thought about trying Sue's phone - the test worked - but never got around to it. The Blackberry was fine for the short entries made on this trip.