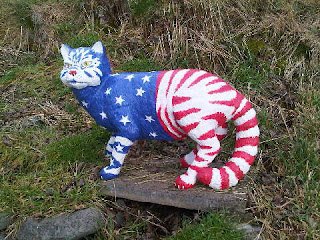 Today was a 'Fine Weather' as opposed to a 'Blue Sky' day, but very pleasant nonetheless.

An easy drive from Bridge of Gaur, after fond farewells to Eddie and Heather and their tribe, found us enjoying elevenses at Newtonmore with Sue O, a TGO Challenge vetter of routes. She then dragged herself away from arduous vetting duties for a 10km stroll up Glen Banchor with us, with Molly and Harvey in tow.

It was a very pleasant interlude in what was essentially a day of travelling, or should that be 'touring'?

Sue gleefully spotted an 'exotic' specimen. A wildcat that had clearly arrived together with grey squirrels and mink from the USA. Sue O remarked that these distinctive but elusive animals are enjoying a resurgence in Newtonmore, where we spotted quite a few today, including one on the roof of her bunkhouse. The village is currently under siege from an invasion of around 140 of these exotics.

Neil made a brief appearance before setting off towards Spean Bridge on his tricycle. It took us a good few miles to catch him, despite setting off only a few minutes later.

A further couple of hours saw us at Cruachan B&B, where our hosts for the next three nights are another pair of TGO Challenge vetters, the redoubtable Les and Izzy. Both are in good form, as is The Creagan Inn, whose jolly staff have taken care of tonight's culinary requirements.

Sent using BlackBerry® from Orange
Posted by Phreerunner at 22:14

Went to the Creagan last year. Didn't know they were vetters. Great spot.

It's Les & Issy who are the vetters. (of Cruachan B&B Port Appin).

Thanks Alan S - I think this was one of Alan R's regular minor hiccups. His wrists will be duly slapped next time we meet.

I wonder whether he saw otters from the living room window at Creagan?