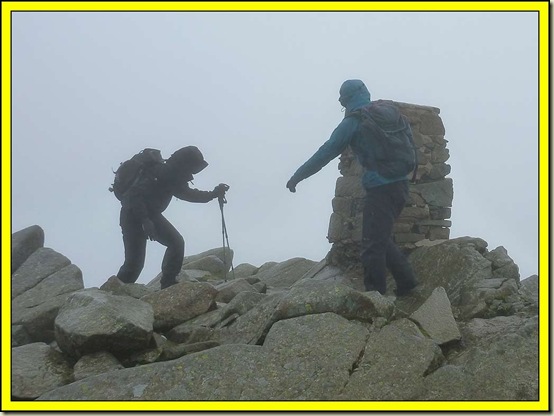 It had been far too long a lay off from Bill Birkett’s fine collection of ridge walks (the last posting is dated November 2010!), so it was a pleasure for Sue and me to be joined by Richard and Jenny for this relatively easy route up Moel Siabod, featuring some fine ridge scrambling – as easy or hard as you want to make it. 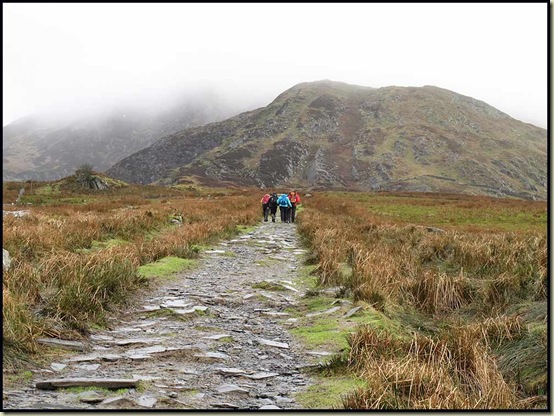 We chose ‘easy’, whilst chatting to a couple of lads on the Daear Ddu ascent who had chosen ‘moderate’.  It was all very convivial. 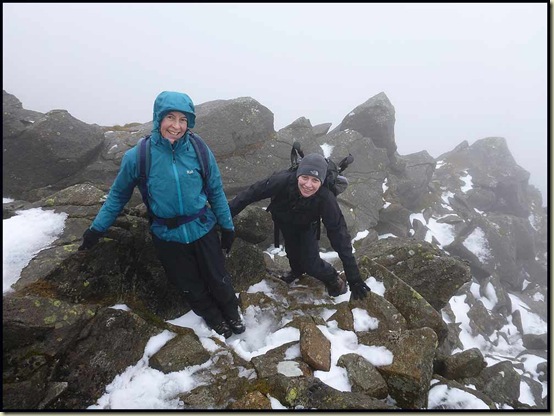 After indulging at the cafe and watching some dare-devil kayakers descend the rapids down the Afon Llugwy, we had enjoyed a pleasant walk up to Llyn y Foel, where we lost the view to a light mist. At the end of the enjoyable scramble to within sight of the summit cairn, we paused in a sheltered spot for lunch.  That was just as well, as on emerging from our haven we were attacked by a vicious wind that seemed intent on preventing us from reaching the 872 metre summit.  It failed, as you can see from the picture above.

Slithery rocks made our descent along the north east ridge a rather painstaking affair, especially after I had taken a tumble.  But there was virtually no snow up there, and the rocks were greasy rather than icy – so no need for winter gear today.

Gradually the air became warmer, the wind chill diminished, and the views to the north and east got clearer. 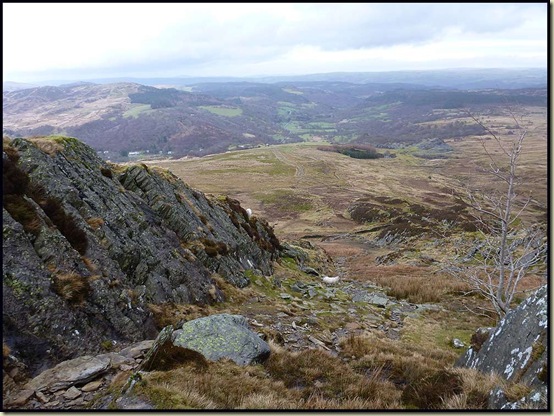 A phone call from a poorly son meant that we didn’t need to rush home to feed him (hope you are feeling better today, Mike) so we pottered amiably back down to the car park at Bryn Glô, where a chap was showing off his new sleeping bag from the Cotswold shop in Betws-y-Coed. 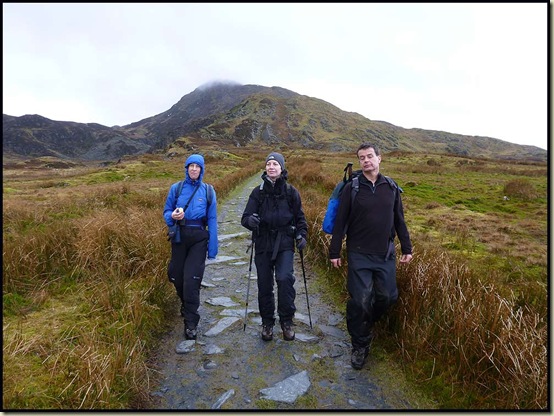 The kayakers had long gone.

Apologies for the brevity, perhaps Sue, R or J have some more to say…? 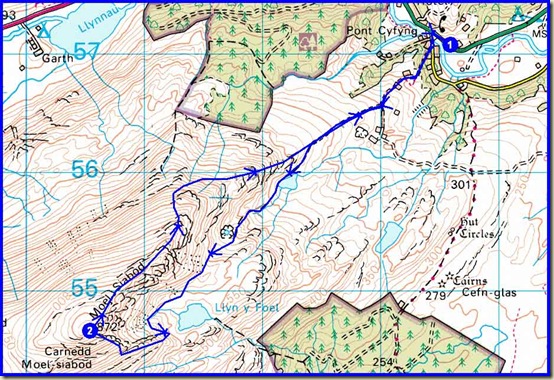 All in all, an excellent day out.  I’d almost forgotten what a good choice Moel Siabod is for a less than perfect day.

There’s no slideshow for the time being as we have some ‘technical transition issues’ relating to our move from Windows XP to Windows 8, which doesn’t seem to support our Picasa software (the upgraded version of which is incompatible with our old version), Web design software (Adobe Studio 8 – Dreamweaver), Photoshop software (CS2), Anquet mapping software, and much of the other software on the old machine, though I think I will be able to find a Windows 8 version of Windows Live Writer….

Though our tribulations are self inflicted (much of the software needs updating anyway, but losing the Picasa albums and all their captions - albeit they are still on the old computer - is a bit of a pain) they could be minor in comparison with what may have happened to fellow blogger Gibson.

Hopefully this will be the final posting from this old but not quite redundant laptop.  Time will tell.  Anyway, Sue and I hope to see some of you on the Sandstone Trail on Wednesday.

An excellent classic route up Siabod, worthwhile even in clag but better with the superb views!.
Good luck with Win8, I would have gone for Win7 myself.

They are all doing their best to brass us off with blogging: I now need a Google account to access the link to Gibson, and once I jump that hurdle it says the blog is accessible only to invited readers.
Shame, I'm always interested in computing tales, being my speciality for so many years.

Hi Geoff, yes it was a good day out - a perfect itinerary for the conditions.

I've never been a computer specialist - I just went for the latest OS, knowing there would be a learning curve whatever I chose. I think there are software compatibility problems with Windows 7 anyway, and our software was generally out of date. Sadly, our friend who was employed by Adobe has moved on...

Gibson has clearly suffered a traumatic internet experience and will no doubt be in touch in his own time. (Hello Gibson...)

Aha. That's a really useful post. I've wondered for years what the route was up Siabod!

Thanks Tony, it's a really nice route up Siabod, and you could avoid the worst of the slipperiness of the NE ridge by descending an easier path to the north - that's the one the fell racers use.

Sadly, I think the XP software is of little use in Win8. I get the impression that most software companies have given up on compatibility mode after some bad experiences with Win7.

I like that route. I have only done it once but i remember it fondly. It was incredibly windy when we were there as well.