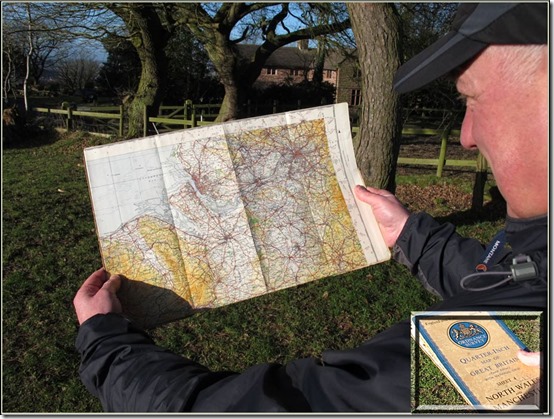 Alan R was quickly put in charge of navigation on this sunny Wednesday morning, and was provided with an Ordnance Survey map of the area.  Surely not much could have changed since the cloth was glued to the back of this map?

I was expecting seven people for definite, but I felt sure that the slightly obscure Simon’s Lane Car Park location might flummox one or two, especially Roger.  But in the event ten good souls managed to wend their way around the M60, M62, M6 and M56 motorways to arrive in plenty of time for the 10.30 start, which proved to be more like 10.20, as there was a cool breeze and we were already quorate. 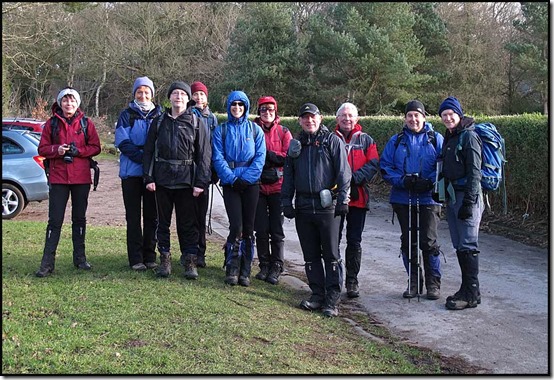 Through the bright green lawns of a golf course speckled with giant daisies, we made our way along the escarpment along which the Sandstone Trail runs for much of its length.  It’s not a very high escarpment, topping out at just 227 metres at Raw Head, a little to the south of today’s route, but it does afford good views in an arc from Liverpool to the north, across the Wirral and the Dee estuary to North Wales.  Further south, the views extend to the Shropshire hills such as the Wrekin.

Today we paused for a while to admire the view to Helsby and beyond. 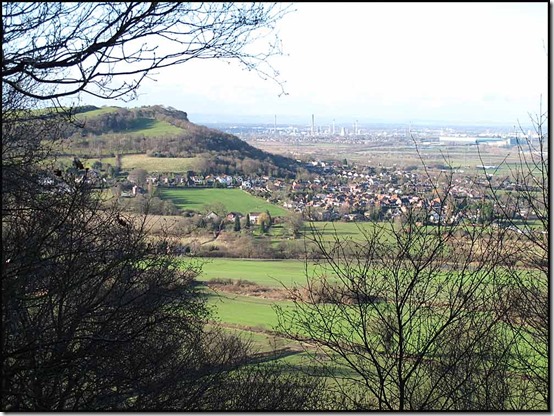 The lighting and clouds made for much easier photography than the dull conditions we experienced a couple of weeks ago in the Scorton area.  It was a great day to be out, despite a chilly northerly. 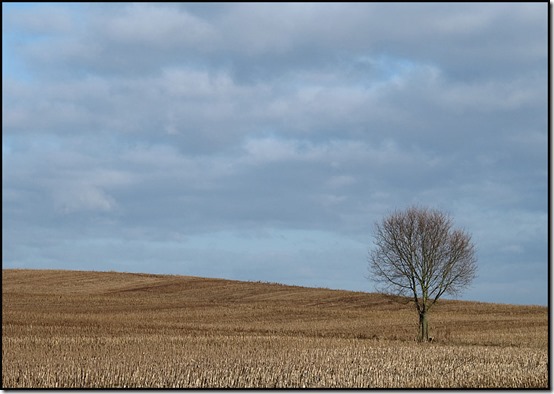 I’d not noticed the Sandstone Trail ‘mileposts’ that seem to have sprung up.  We noticed at least two of them today – substantial lumps of stone that bear the hallmarks of a labour of love.  I like the way the distances have been marked in kilometres – for me they stamp a 21st century hallmark on an ancient craft.  Well done, whoever inspired and made these. 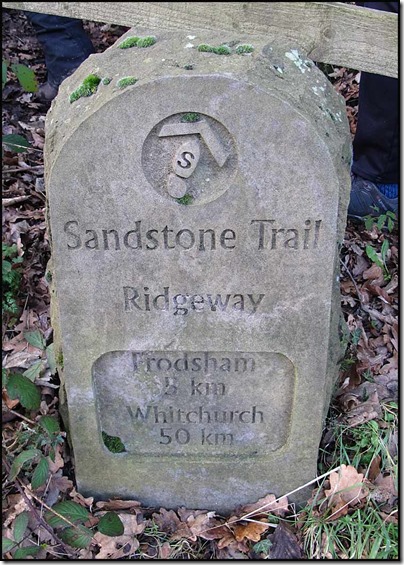 With a short section of road imminent, a halt was called for coffee and cake.  The cake was intentionally moist today, in the true tradition of ‘brownies’, but I was berated for leaving the shortbread at home.  Oops! 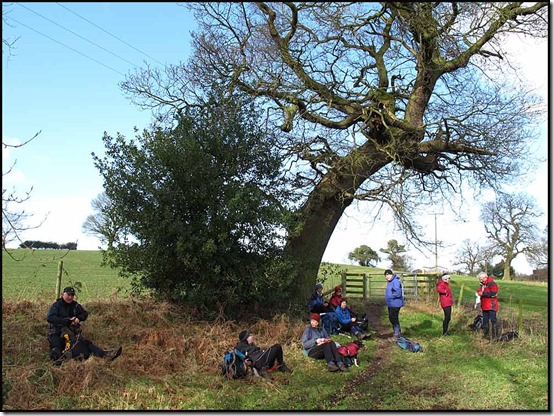 A little further on, we passed Stonehouse Farm B&B, which some of those more familiar with this area suggested was a most excellent amenity, with a huge garden in which to enjoy tea and cake.

On a warmer day, perhaps… 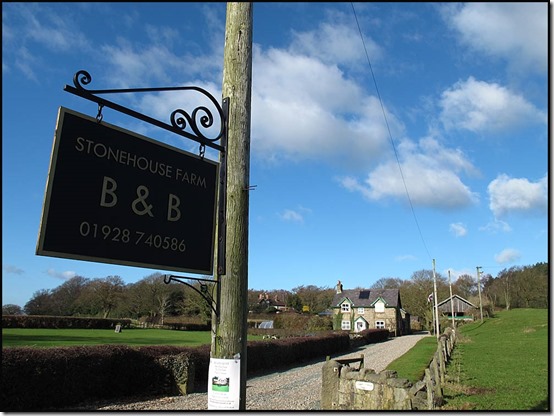 The march to our own refreshment stop continued through more stubble… 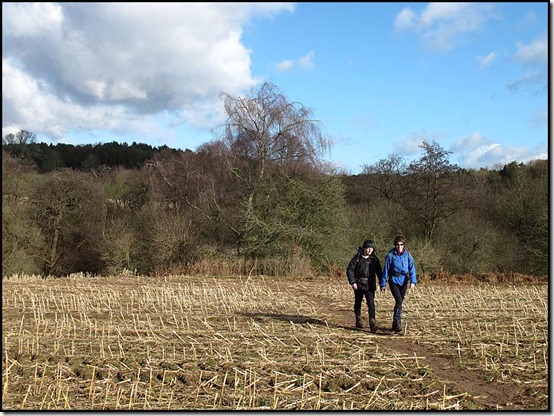 Then after I’d enjoyed my usual moment of temporary misplacement and we had retraced some steps, Maude’s nose started to twitch as we approached the Visitor Centre near Delamere Station. 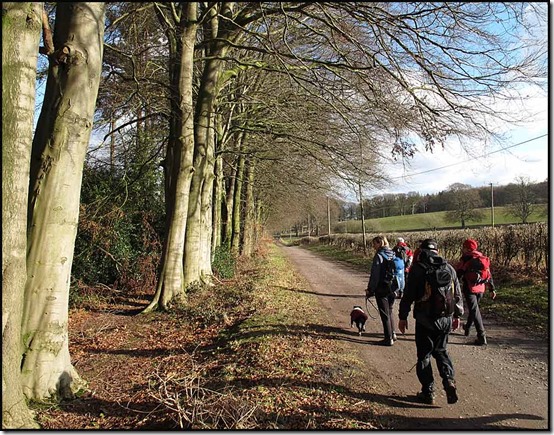 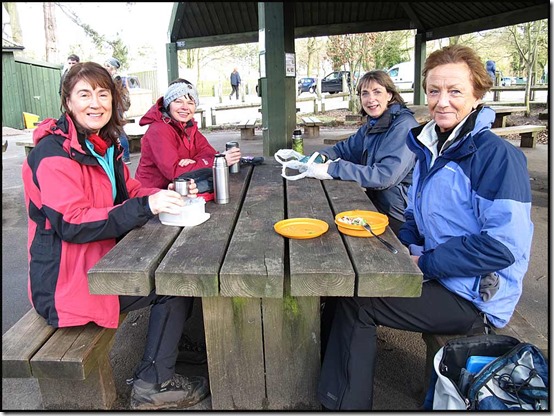 This time we sat down to lunch in rather more congenial surroundings than those encountered two weeks ago on the way to Nicky Nook.

Two mountain bikers faffed nonsensically nearby, then a jolly bunch of kids arrived, fresh from some mountain bike tuition, so (as it was a bit cool) we moved on briskly to enjoy the delights of Delamere Forest’s woodland paths. 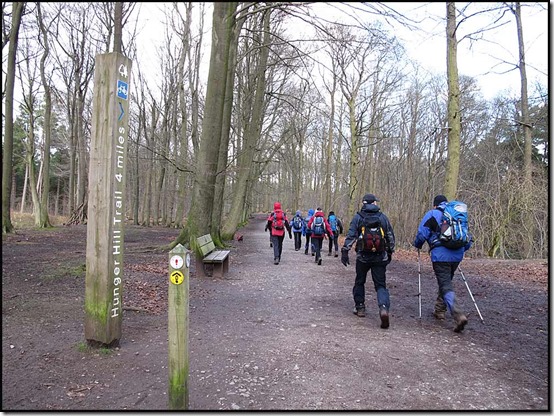 We found the Sandstone Trail again and headed north for a while along the well signed path that made today’s navigation pretty easy. 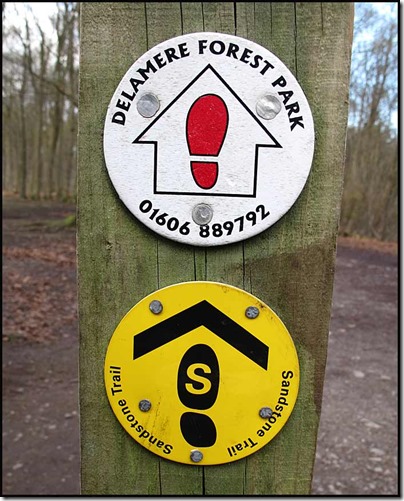 Our route back to Simon’s Lane and Beacon Hill took us slightly inland from our outward path, after we deserted the Sandstone Trail once again.  However, we still enjoyed good views across the Wirral to Liverpool, and to the hills of North Wales further south.  En route, we passed Crossley Park, a secure enclave whose gates were shut by an invisible doorman as we contemplated entry.  Was it Roger they spotted on their CCTV, or the demon hound Maude?  We’ll never know… 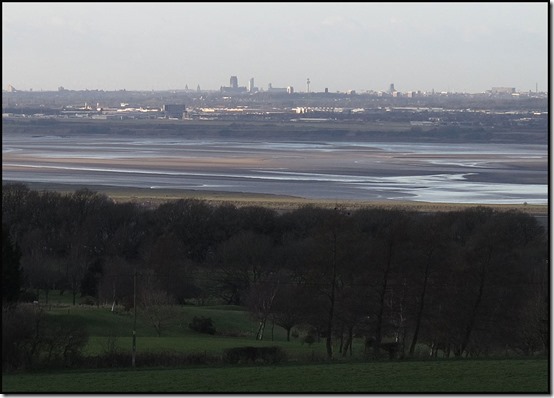 Apart from a short climb to the car park along a short piece of tarmac, the last stage of the walk delivered us through well cropped fields on a largely downhill course. 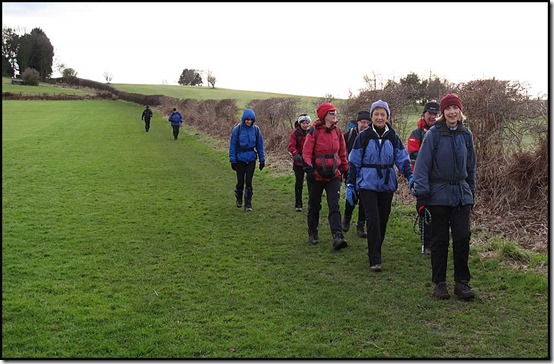 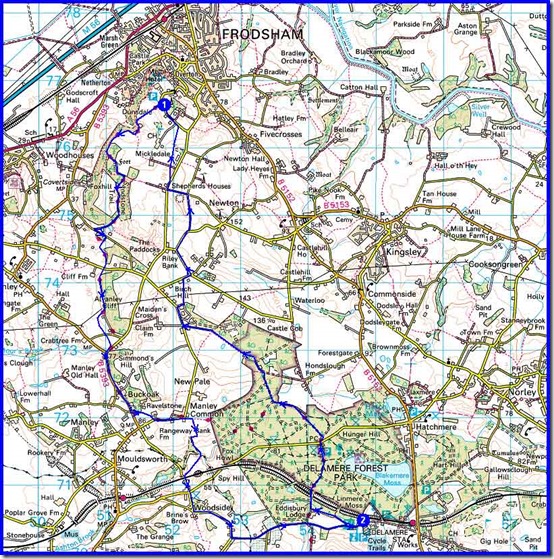 There’s a slideshow, if you are desperate for more! – here.

My next Plodders walk starts from Leighton Moss RSPB Reserve at 10.30am on Wednesday 20 February – meeting earlier if possible, in the café.  We’ll be trying to find some of Silverdale’s ancient wells,and taking an excursion up to the fine viewpoint of Arnside Knott.  Hope to see you there.

Alan R’s alternative version is here, and I should add our best wishes to Phil’s Face for a speedy recovery, and thanks to Allan R and JJ for their apologies.

Thanks for a good walk in fine company.
I now think you make these unplanned detours on purpose. lol.

I've now inserted a link to Alan R's work of fiction/integrity (delete as appropriate) on this Plod...

What apology would that be then?