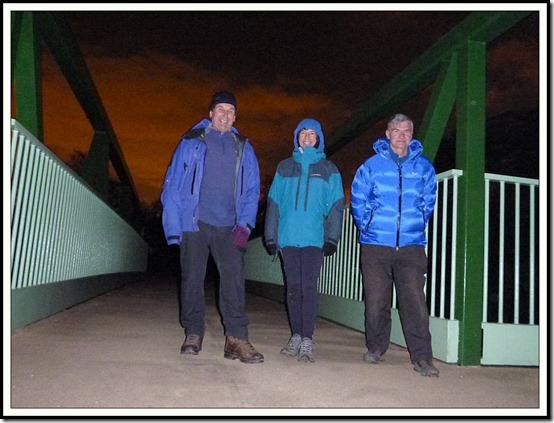 Having postponed walks planned for last Friday and last Monday, and abandoned this Friday’s plan to cycle the 47 mile Mary Towneley Loop, all due to the unseasonably cold weather and roads, bridleways and footpaths blocked with snowdrifts, we refused to curtail last night’s long planned evening walk.

I had in mind a walk from the Midland Hotel in Marple Bridge, to Strines via Roman Lakes, and back along the Macclesfield Canal towpath.  But on arrival at the Midland I was reminded that the walk was supposed to be to Chadkirk.  Oops!  With no map and only a vague recollection of the route (I could do the expected Strines route blindfolded), our local representative, Graham, was pressed into action as leader.

He was keen to show us a new bridge over the River Goyt, but he wasn’t quite sure where it was.  So we set off by heading up to the canal (where I switched on my Garmin gadget – see route below) and proceeding along the pleasantly dry towpath for a few kilometres.  The cold easterly wind was behind us, and the route was fairly sheltered, so it was a pleasure to be out.  There was supposed to be a pretty full moon, but sadly it hid behind a low bank of cloud until after we had finished the walk.  Nevertheless, Marple’s ambient light and the beams from a variety of sources from security lights to aircraft headlamps made our own head torches completely redundant.

After negotiating a tunnel, some dog walkers, and a brightly lit but pedestrian cyclist, we arrived at some steep steps down to Chadkirk.  There’s an old chapel here, but we missed it today.  This is the point at which one of my 40 mile bike circuits from Timperley leaves the Trans Pennine Trail and joins the Cheshire Ring, so I briefly recognised the location.

Anyway, Graham led us confidently on to a plethora of new signposts, one of which directed us to a point known to be on the other side of the formerly unbridged river.

“It must be that way” asserted Graham.  And it was.  A wide new track brought us to the impressive bridge over the River Goyt on which my three companions on this pleasant evening are pictured above.

To be honest, I think I could have found my way thus far, but Graham’s local knowledge of the paths and ginnels that jinked their way back to the heaving chunks of humanity in the crowded bar of the Midland Hotel was really quite handy.

The route is shown below – very pleasant for a short excursion, evening or otherwise – click on the image to get a bigger one that you stand a chance of reading!  It was 7.5 km, with 100 metres ascent.  Allow 1.5 to 2 hours. 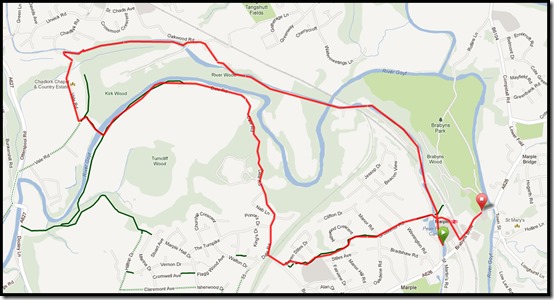 Our next evening walk should at least start in daylight – it’s on 25 April and will see us summiting Lantern Pike from the Pack Horse in Hayfield.  We should be able to find the way.  All are welcome.