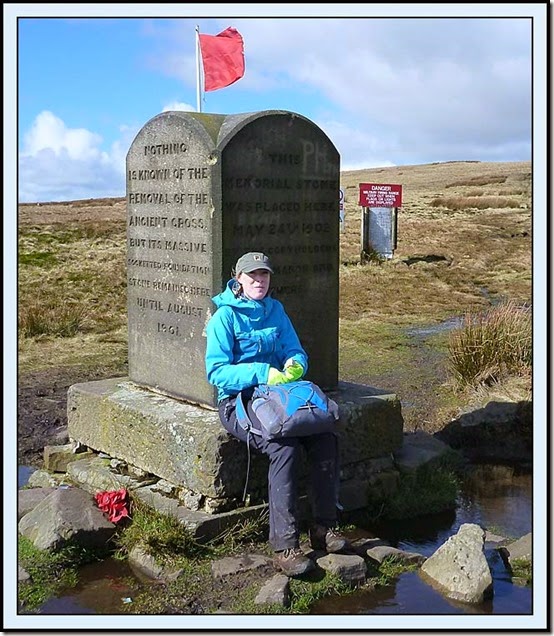 Today 280 or so folk assembled at Tottington Youth Centre for the 29th running of this excellently organised and supported event.

But I’d never paid much attention to the route, and this year I’d decided to meet the ‘Challenge Walk’ in the spirit of a challenge and walk the course at a brisk pace.

A shower hit Tottington just as the mass start took place at 8 am, so overtrousers and waterproof jacket were donned. The rain soon stopped, mercifully for the rest of the day, but overnight rain and hail had led to very muddy conditions, and a cold westerly wind prevailed. So whilst the jacket soon came off, gloves and overtrousers remained donned all day.

As fast as you may desire to go at the start, a series of stiles and kissing gates ensures that the 280 strong (plus a number of dogs) field gets fairly spread out as they wait in a long queue to pass through each obstacle.

I soon moved ahead of JJ’s crack team including Fast Blackshaw, Viv, John B and Judith, and by the time the first of the two crosses, Affetside Roman Cross, was reached the waiting at each stile was fairly short.

It’s a headless cross on Watling Street, thought to be a Roman road where Julius 10th Legion commander is supposed to have established a temporary camp. The name 'Affetside' is thought to come from 'half each side', this point being halfway between London and Edinburgh. The cross itself may date from Roman times, although others say it was placed here in the 17th century marking the village market place. There’s a socket in the top of the post where the cross used to sit. 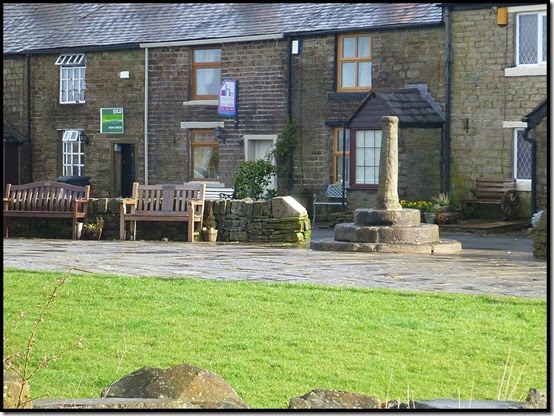 I took very few photos, so readers will have to make do with these few random shots taken on the few occasions when I remembered I was carrying a camera. The two earlier walks (see links above) illustrate the route rather better.

Anyway, here’s the first random shot – you can see that these walkers descending to the A676 road have already gained rather muddy footwear and Julie Gardner, on the right, clearly doesn’t have any stomach for washing trouser legs. 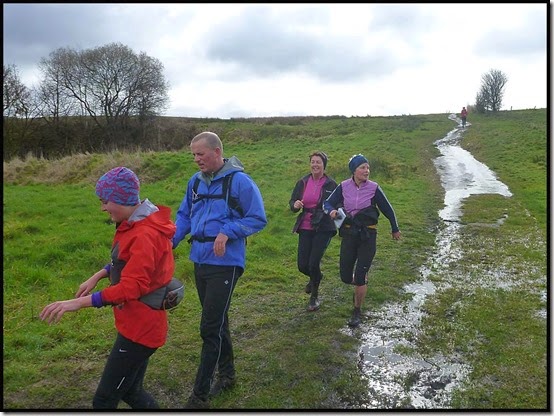 Meanwhile, I was treading very carefully in an effort to keep my feet dry, despite Julie’s unscheduled diversion along a mud clogged track by a wood at SD 693 173. I was the only person daft enough to follow her. I got my instructions out after that, rejoining the string of walkers ascending Longworth Moor behind someone else whose washing machine must have banned muddy trouser legs. 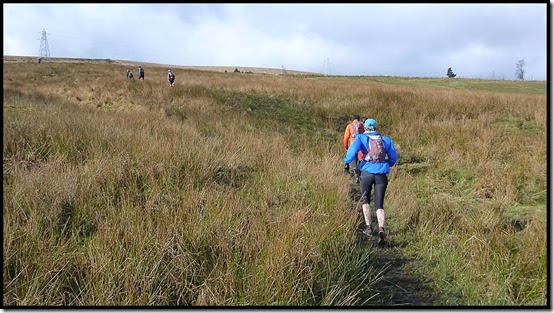 After an even boggier section through which keeping one’s feet dry required very tiptoey movements interspersed with long hops between tussocks, a good track was eventually reached. The sun was out and there was plenty of time to admire the view across Belmont Reservoir to Winter Hill. 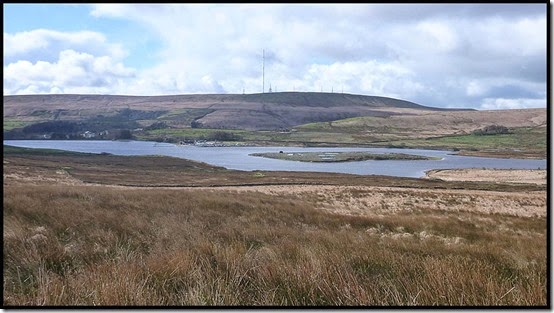 The trio ahead of me ran off into the distance whilst I strolled in the company of mountain bikers against a cold westerly wind for 3.5 km up the Witton Weavers Way towards Old Man’s Hill and the next checkpoint. I didn’t expect to see the trio again. 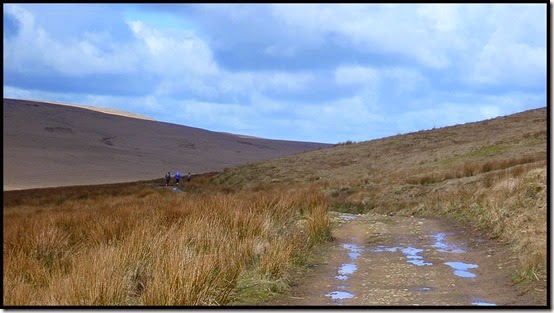 The camera then went away whilst I toiled up Turton Moor, then down to the good path around Turton and Entwistle Reservoir for lavish supplies afforded by the checkpoint at Batridge Barn Car Park.

The shorter 17 mile route goes through here, so from now on the sludge in the muddy paths was even deeper as numerous people on the shorter route had already gone through. Julie Gardner was there with her dog, as was the trio I didn’t think I’d see again. We all set off together after the others had possibly enjoyed a three course meal as compared with my quick snack. Thanks go to Viv’s team for providing such luscious support.

In fact, thanks go to all the checkpoints for the excellent provisions and support throughout the event.

A little later, after we’d encountered a couple of trial bikes and passed Mary who was doing the shorter route and seemed a bit misplaced, the route description says ‘Pass rusting harrow on L’. “That’s a bit precise” commented the trio, who are pictured below – Neil, Carly and Rebecca, who I can thank for acting as inadvertent pacemakers. 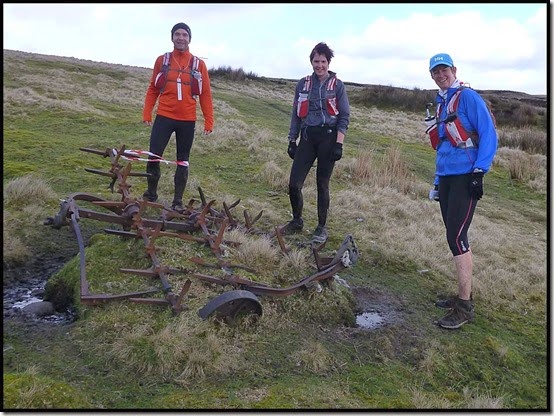 Proceeding across the bog that is named Holcombe Moor, I began to realise, looking down at my feet, that my dry feet could be attributed only to my Sealskinz socks. After that spell of slow bog it was a delight to reach the comfort of the ‘Naughty Corner’ checkpoint, where a glass of sherry saw me speeding off ahead of the bemused trio and passing an even more bemused Judith, who had chosen the shorter route.

Soon I’d traversed around Bull Hill, a danger area where red flags were flying, and reached the second cross, Pilgrims Cross. Here Alison, another complete stranger, posed nicely for me.

The four sides of the Pilgrims Cross cube tell the story of history of the cross, its significance and destruction. Here’s what each of the four sides say:

“On this site stood the ancient Pilgrims Cross. It was standing in AD 1176 and probably much earlier . Pilgrims to Whalley Abbey prayed and rested here.”

” In AD 1176 and in AD 1225 the Pilgrims Cross is named in charters of gifts of land in Holcombe forest. In AD 1662 King Charles II gave this manor to General Monk, Duke of Abermarle through whom it has descended to the present lord of the manor.”

“Nothing is known of the removal of the ancient cross, but its massive socketed foundation remained here until August 1901″

The socket was destroyed by unknown vandals in 1901. By 1902 as the present monument tells us, the present stone was put in place. Monuments on ridgeways like this would have been invaluable guide posts for medieval  travellers, both as a means of knowing how far they have travelled and as a means to orientate themselves in bad weather. Navigating by landmarks would be crucial in upland and moorland environments, so crosses and large prehistoric burial mounds would all have been named. The original monument was also known as Whowell’s Cross and Chatterton’s Cross. 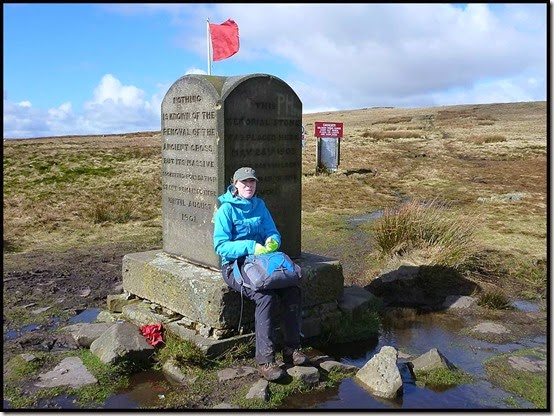 As you progress over Holcombe Moor, Peel Tower comes into view, with walkers dotted along the path to this 39 metre memorial to Sir Robert Peel, opened in 1852. 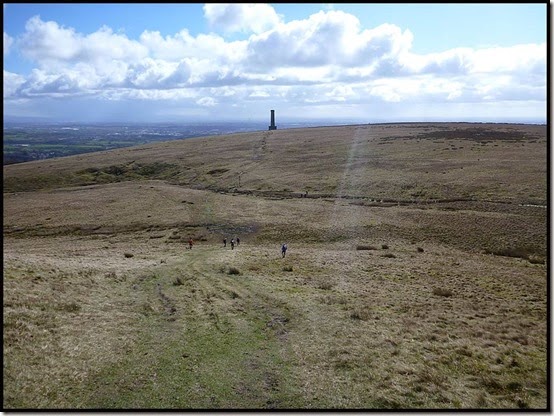 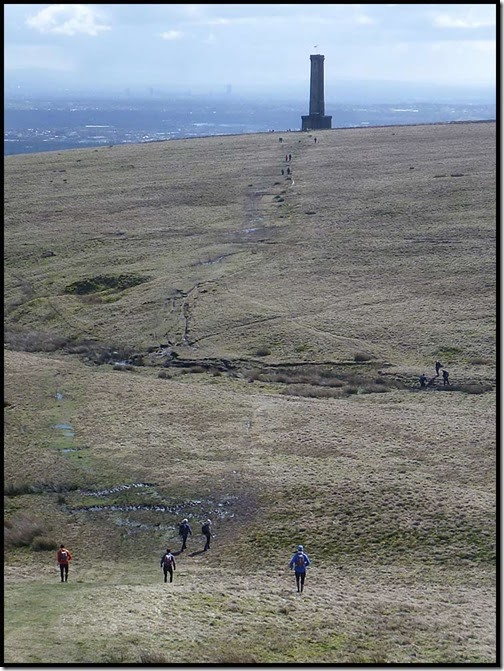 It’s downhill virtually all the way from the tower. Some may consider that the descent in Redisher Wood to Holcombe Brook is a little excessively downhill. Here the trio were a little behind me. 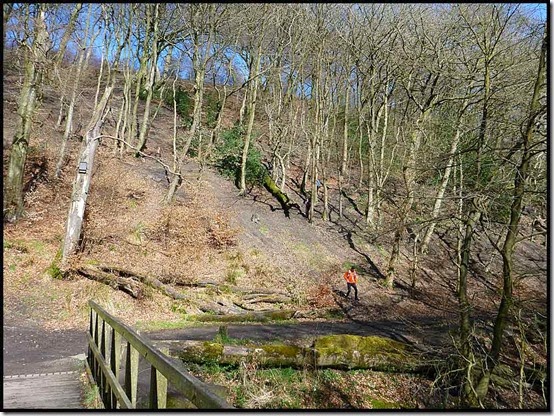 I paused on the bridge to admire the views up and down Holcombe Brook (and perhaps take a breather!). 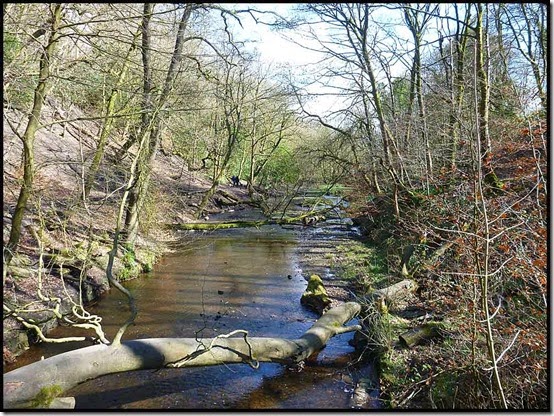 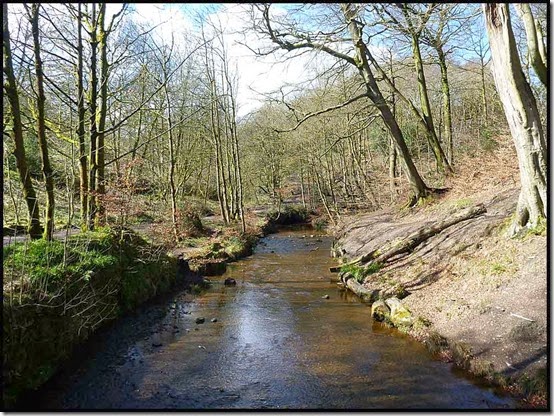 Meanwhile, Neil jogged past, looking annoyingly frisky after well over 20 miles in the mud. Rebecca and Carly are in the trees behind – can you spot them both? 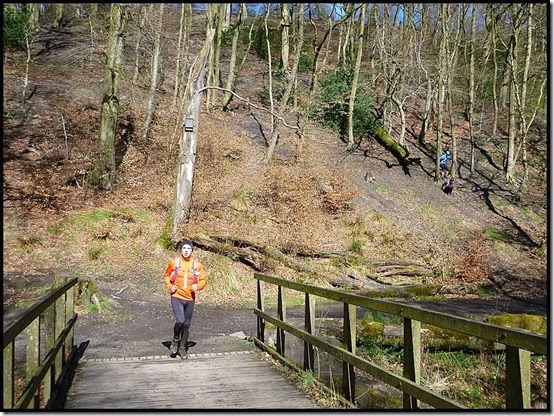 The final checkpoint was soon reached, followed by a final boggy trudge to a golf club at Greenmount. Then it was all very easy, on firm ground to Holcombe Brook and the disused railway line that delivers walkers past Kirklees Brook (pictured below) to the finish at Tottington Youth Centre. 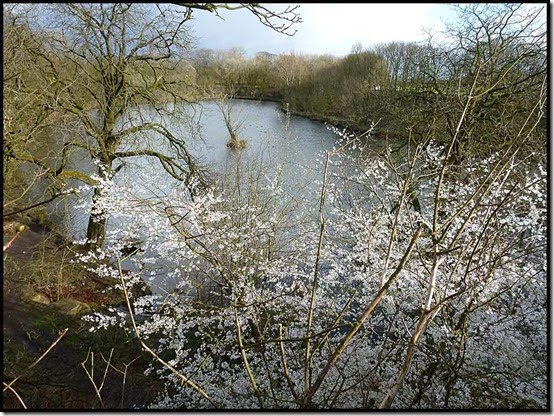 Here’s the approximate route – according to Anquet it’s 40 km with 1000 metres ascent, taking 9.7 hours based on Naismith’s formula. 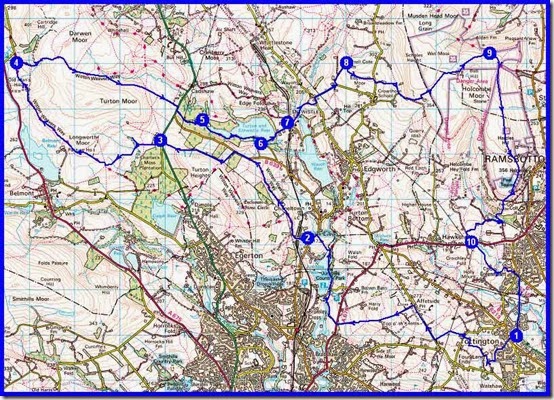 I’d gone a bit quicker than that, finishing before 2 pm for the second day running, this time in 5 hours 49 minutes according to my certificate.

This gave me all afternoon to socialise and enjoy numerous cups of tea and bowls of soup etc at the well catered finish. I strolled back up the route to walk in with Judith, then with Roger, and I attempted to do the same with JJ’s crack team. It turned out however that they were self appointed ‘sweepers’ and rumour had it that they were staying at each checkpoint, drinking eating and being merry until being ejected – only to repeat the performance at the next checkpoint.

So I went home for my tea.

Here’s my route as recorded by the Garmin gadget, which curiously records ascent as 806 metres, compared with Anquet’s 1000 metres.

If anyone wants higher resolution copies of the above pictures, they are available here. Full size images can be provided on (albeit unlikely!) request.

That view across Belmont Reservoir to Winter Hill is familiar - I was up on WH on 7th March, and I could also see the peel tower.

Well done. you certainly seem to be getting about a bit at the moment.