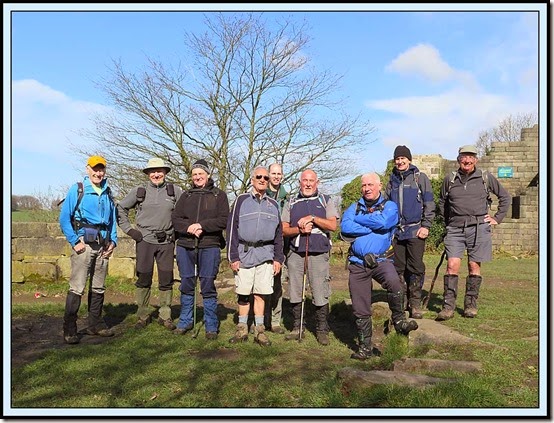 John Pickton led eight of Reg’s disciples to the ruined folly of Liverpool Castle (a scale replica built by Lord Leverhulme) for a self-timed photo, then led them briskly away again.

Sun beamed gently through the woods beside Rivington Reservoir. 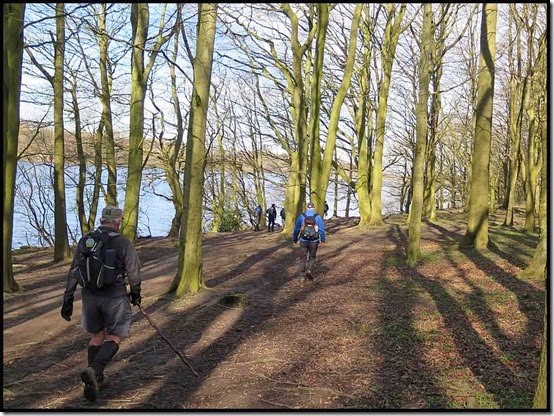 We soon crossed the causeway to continue along the west side of Anglezarke Reservoir. 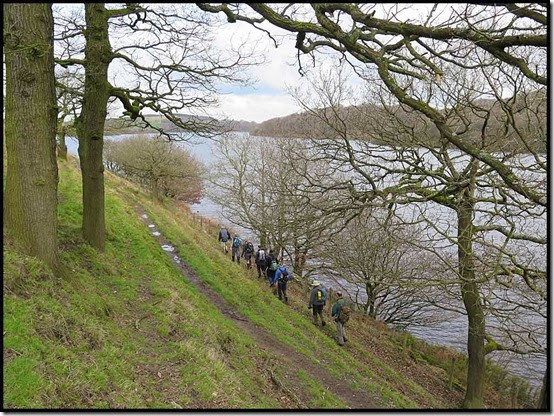 A helicopter passed close overhead, confirming that John had ensured that rescue facilities were on hand for the nine old timers. Reg was maybe in the cockpit.

A large house, The Street, on the west shore of Anglezarke Reservoir generated a story from John about it being owned by Jonathan Warburton, who I know from my professional career has plenty of dough and regards himself as a thick crust above the rest of us.

After passing through a light coating of mud, nothing compared with Sunday’s dose on the Two Crosses walk, Heapy Fold lane offered a good place for tea and cake on a dry grassy bank.

John was soon champing at the bit to set off again. 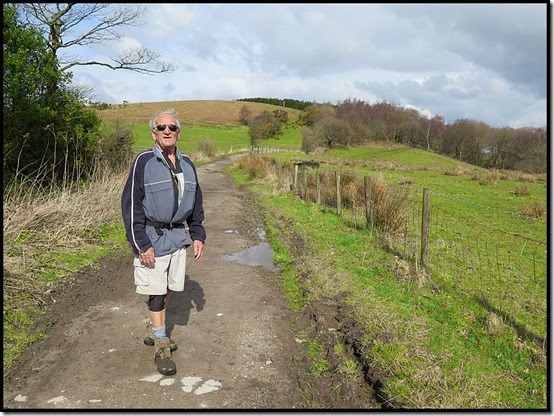 An extra loop past a farm revealed goats and emus, not to mention a few chickens and rabbits, etc. 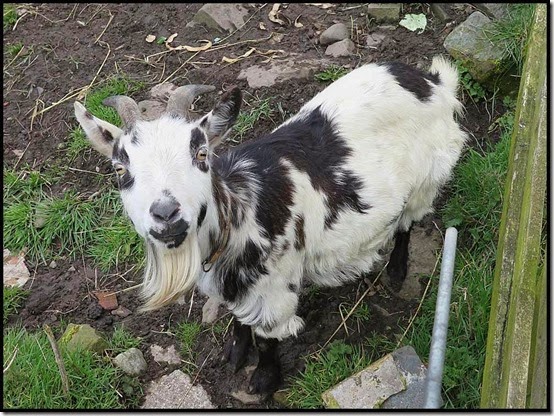 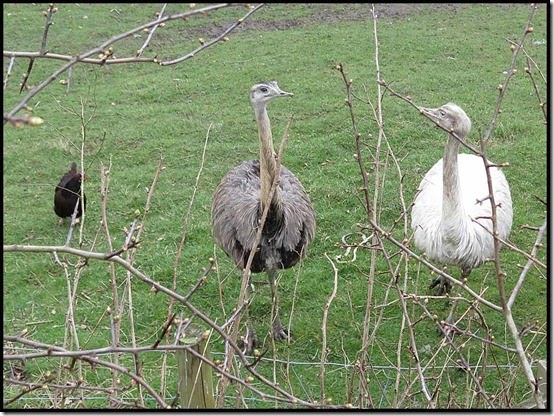 Eventually we reached the pretty hamlet of White Coppice, where we enjoyed lunch in the presence of the ghosts of our cricketing heroes. Alan R shuffled his soggy toes awkwardly. That’ll teach him to plod in flip-flops!

After owning a series of cameras with panoramic settings, I’ve discovered that the Canon G16 doesn’t have such a setting. Progress or what? Anyway I took four photos and used the usual Canon PhotoStitch software to produce this lunchtime panorama.

Seems ok to me, albeit the format of the blog isn’t really suitable for panoramas except as headers and footers.

The eastern side of Anglezarke Reservoir afforded excellent views of Rivington Pike and Winter Hill as we made progress south to cross the embankment by Yarrow Reservoir. 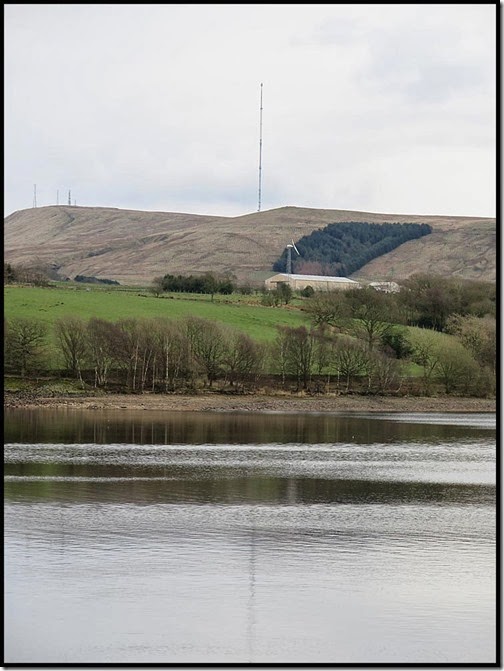 Amongst the trilling curlew and the raucous oyster catchers lurked an albino mallard in the reeds, too demanding for my limited wildlife photography skills..

Back beside Rivington Reservoir we passed Go Ape, where John P reccied a future adventure for Plodders, but it does come at a cost of £30 a head.

Alan R and I then dived into the nearby café, only to be dragged out by John just as we reached the front of the queue. Apparently a vote had been taken and four of the seven had elected to continue, relying only on their cold dregs and bruised bananas for sustenance. Apparently Alan and I had not been taken into account in the voting as, being in the queue already, we weren’t present! Don’s overwhelming desire to return to his mother’s bosom before sundown seemed to have prevailed.

So we pootled off in the sunshine, arriving back at the car park well before 3 pm. 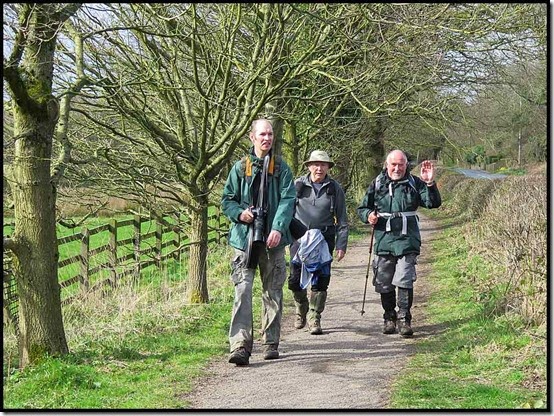 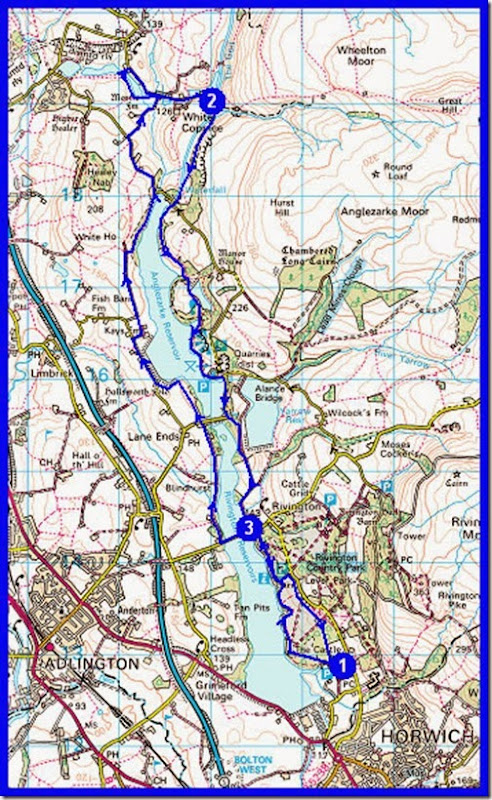 Thanks to John for leading, and to Alan R for his entertaining (if fictional) report here. There are a few more photos here.

The route according to my Garmin gadget is shown below:

What do you mean fictional! Have you not heard of Draughy’s licence.
Thanks for the map. My Satmap won’t work with the Mac.

Oh yes, Draughy's licence. I'd forgotten about that. Sorry. I've added the route according to Garmin as well, for the avoidance of doubt about its hidden complexities...

Wow them steep bits look steep. I never felt a thing apart from that last up along the road when John decided to upset a few.

Thats a cracking picture of the 2 Emu’s btw. i could envisage a little competition here about what they are saying.

They were talking about their mate, joking about her being a midget (they think they are chickens). Sadly my picture of the albino mallard came out as a distant white blob!