Saturday 22 March 2014 – Crowden and Black Hill with the AAC 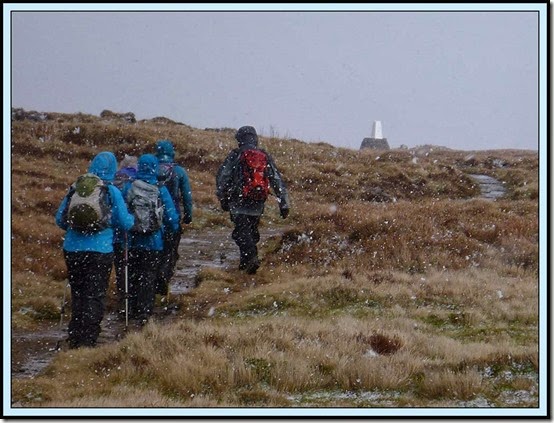 On Saturday Sue and I had the pleasure of joining some members of the Austrian Alpine Club* for a walk up Black Hill from Crowden.

We set off with eleven walkers, mainly of ‘Plodder’ vintage (regular readers will understand that). The vision of Black Hill’s looming bulk proved a little much for Jane, who soon turned back.

The sun was trying hard as we headed up to Laddow Rocks. 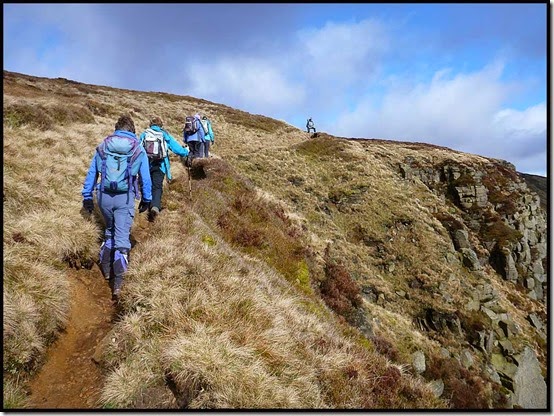 We passed Oakenclough Brook and Laddow Rocks, with the sun occasionally sending encouraging beams through the encroaching thick cloud.

For a while we enjoyed good views ahead, and back to Crowden. 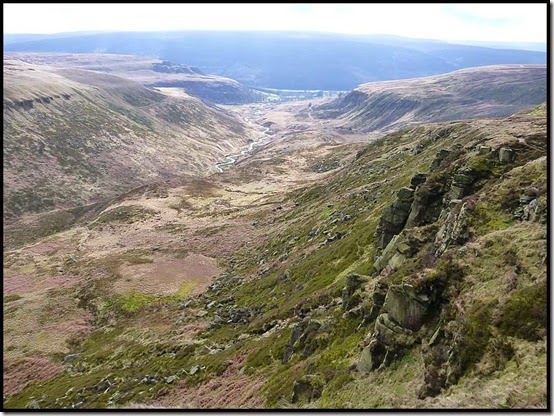 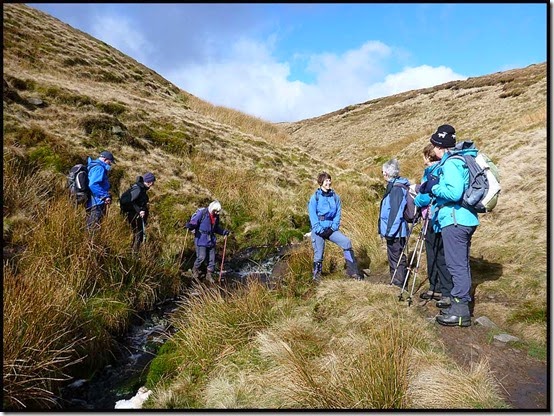 The route was easy to follow along the paving of the Pennine Way, with the Holme Moss mast also guiding us inexorably towards the summit.

We managed to select a nice spot for elevenses, bang on time, at which point ‘cake’ also went down well. Unfortunately Anthony pulled a muscle trying to jump across a stream and appeared to have turned back, though it later transpired that he had stuck dutifully to his appointed role as backmarker, arriving back at Crowden with his wife a good hour after the rest of us.

Soon after elevenses the clouds finally engulfed us and protective outfits were donned to guard against the stinging hail, which was also rather wet. 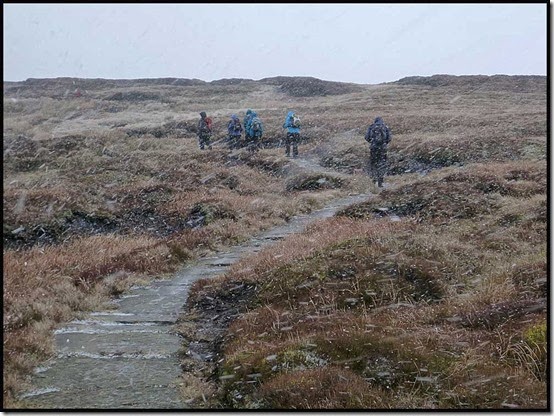 We eventually reached Black Hill summit, pictured at the head of this entry. It amazes me how the summit area has changed for the better since the Pennine Way paving was laid a few years ago. In places smooth grass has taken over from what was once a deep black quagmire.

We didn’t linger at the summit.

The cairn on Tooleyshaw Moss was our next target, from where we could look back to see someone standing on Black Hill’s trig point. So it can’t have been as windy as we thought!

Our group of eight managed to stay mainly together as we sloshed our way across Tooleyshaw Moor to White Low, following a trail of marker posts. 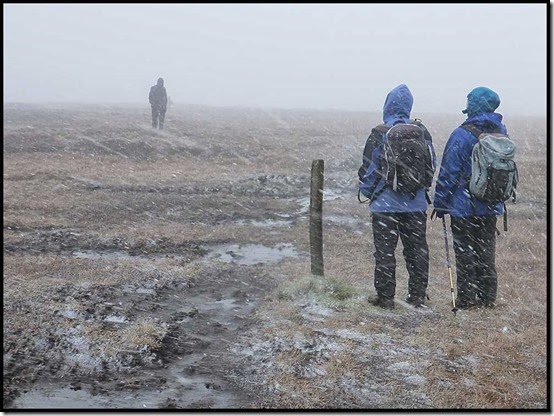 The descent was mainly into stinging hail, though it did clear a little from time to time.

Lunch had been taken in relative shelter between showers. It wasn’t a long break as the weather was chilly and damp. 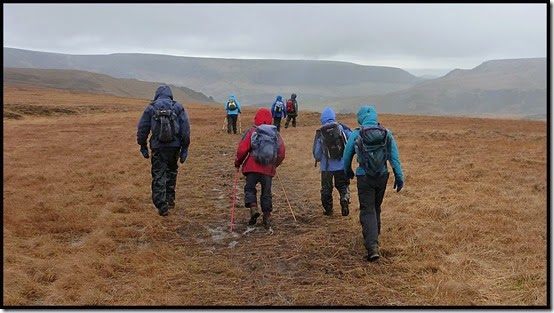 Whilst everyone else descended by the lower path down Hey Moss, I took the higher route past what is marked on my map as a ‘Pillar’ on Hey Edge. This looks to me more like a trig point in the middle of a moor than a pillar on an edge, but who am I to judge? 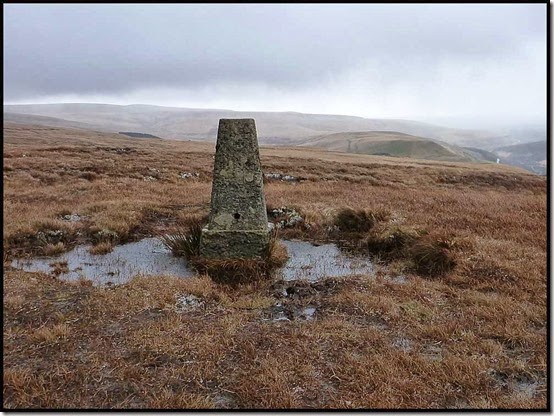 I dodged a deep quarry to drop steeply and rejoin the others above Crowden. We were soon joined by Vicky and Heather, who had varied the route by starting with a gorge scramble, presumably up Crowden Brook. They seem to have enjoyed it. I’ll remember Heather for her huge white gloves that looked to me like the ends of false arms.

On the last lap to Crowden, some of the party looked a little bedraggled. 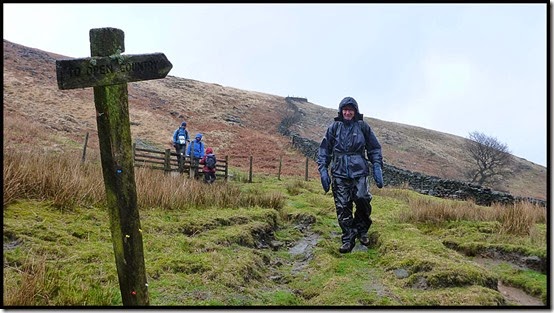 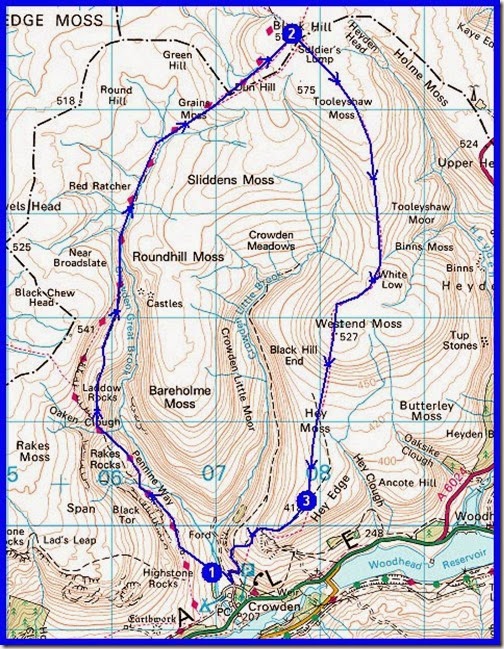 We reached Crowden Youth Hostel at about 2pm, and spent a pleasant afternoon in good company with tea and cake and chat. Looking out of the window to see whether it had cleared sufficient for a further stroll, we decided “No, another glass of mulled wine, please?” 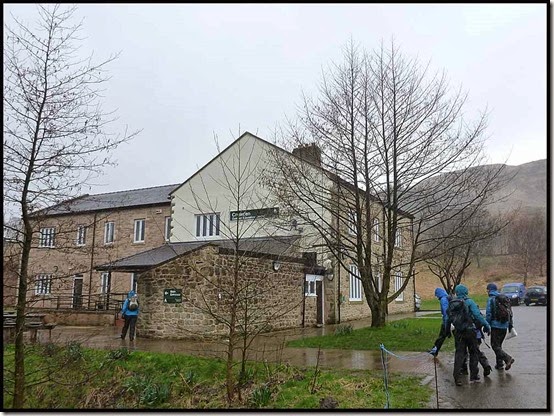 After a good meal, we enjoyed an evening of photo presentations from many of the twenty plus folk who were present. Sue’s E5 Photobooks were admired, and a couple of my Pyrenees Adventure books were sold, one of them to Jerry, who I now realise with some embarrassment that I may have been rather rude about in the book. I’ll leave readers to make their own discoveries, but I do apologise unreservedly to Jerry, and I’d be interested to hear about how his trip progressed after Lescun.

Crowden Hostel is due to close at the end of March, and we were the final group booking, so far as I could ascertain. Here’s what the Pennine Way Association thought about the closure when they found out by chance in November 2013.

It was with both a measure of surprise and disappointment that the members of the Executive of the PWA learnt of the forthcoming closure of the YHA hostel at Crowden in its current form on March 31st 2014.

Indeed it was only when former Secretary Peter Stott tried to reserve a room for a stay next Spring that we , or anyone else as far as we can ascertain, were aware of the situation. Subsequent investigation by both Peter and Chris Sainty revealed from the YHA that a decision and mutual agreement had been reached with Rotherham Council to close the hostel as a functioning youth hostel and all matters relating to the hostel would be handled in future by the owners Rotherham Council. This was confirmed by Mr Colin Gratton-Rayson who is the Outdoor Learning Youth Work Manager for Rotherham Council. Mr Rayson stated that the hostel would be available for bookings by groups. The definition of a group is not at the moment clear but is believed to be not less than ten people per group. Crowden had been operating as what is known as an Enterprise Hostel and the status of these is reviewed on a periodic basis.

To say that this change is a disappointment is an understatement as anyone who has walked over from Edale, even on a good weather day will appreciate, as accommodation hereabouts is very limited. What is of more interest is the covert way the whole process regarding the change has been, with no known news appearing in the press or from the organisations concerned and no information in the outdoor press. This is a major cause of disappointment as there appears to have been no consultation whatsoever.

As it happens Chris Sainty had made a reservation at Crowden some tine ago and he has now received contact from the YHA that his booking has been transferred to the Old House at Glossop. It is obvious that this change will cause difficulties for Pennine Way walkers and it is to be hoped that facilities will become available in the Glossop area as an opportunity exists here for an enterprising organisation.

*The AAC(UK) is one of the the largest UK Mountaineering Clubs with over 9,500 UK and overseas members. The principal benefits of membership, at no extra charge, are:

(We use the AAC mainly for the discounted accommodation in mountain huts across Europe, saving up to €10 per person per night.)

Looks wet and cold but great if you keep moving. Such a shame about Crowden Hostel. They must have kept it quiet incase they ended up with a mass trespass or mass squat. I think there is a precedent for that.

We just about kept moving! Yes, it sounds as if there may be some politics going on around the closure of Crowden as a normal hostel - I left the comment to that PWA quote, as any observation of mine may not be well informed.

I forgot to thank John Hardwick for organising this weekend. Thanks John, and thanks to the members who made us feel so welcome. And it was good to meet Phil at last, after all our communications over the 2012 photo competition that we judged.