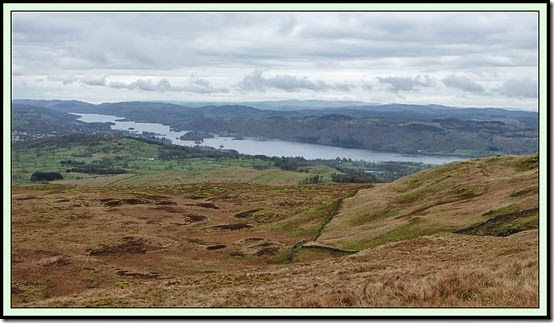 Well, more a sort of amble.

It was about 8pm on Thursday night. I was fiddling on the computer with something inconsequential and gravitated into Facebook for a short break.

“Making plans for a hill walk in the Lakes tomorrow” popped up from Alistair. The forecast looked fair so after some exchanges of messages and a phone call I was able to tag onto Alistair’s plan to get a few metres of ascent into his TGO Challenge training schedule.

After a leisurely start and an easy drive to the Church Bridge layby in Troutbeck, we were ready to start by 10.30. The forecast had indicated that the mist would clear by late morning, hence our late start, but we set off in 100% humidity on a warm windless morning on which the water vapour could be clearly seen in the air. During the morning we faffed with various items of clothing, but dampness was the name of the game. I was damp in my t-shirt with a waterproof outer, and Alistair was damp in his t-shirt and fleece. 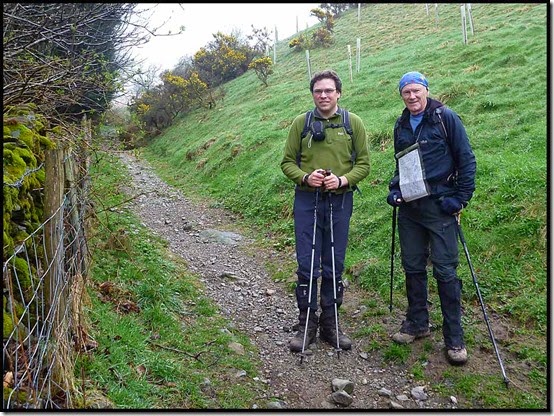 The first four kilometres was along a pleasant path to the east of Trout Beck, to the footbridge north of Lowther Brow. We’d expected the 364 metre summit of Troutbeck Tongue, which hill neither of us had previously visited, to be clear of mist, but even though it was only 150 metres above us it was well shrouded. From the footbridge a lovely ascending path drew us slowly to the summit, our first of nine for the day. Photos were taken. Not prize winners! Here Alistair poses on what he claimed was the true summit, a few metres away from the summit cairn that can be seen protruding into the background mist. 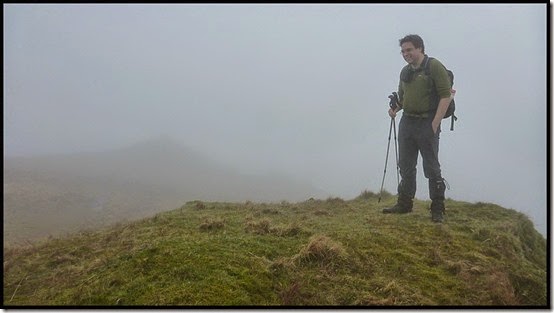 A gently descending path then led us north through Troutbeck Park, joining a wider track from where our longest ascent of the day saw us ascending Park Fell in the persistent mist. It remained warm, calm and sweaty. Around 1pm, between 500 and 600 metres, we took time out for lunch, conveniently breaking the ascent to Thornthwaite Beacon (784 metres), the second half of which was undertaken easily by two thoroughly refreshed walkers. Two gents lounged at the beacon, the first of eleven people that we saw during the course of the day. A minute or two later, three more shadows in the mist came and went. We enjoyed a few minutes behind a wall in the lee of the gentle but cool westerly breeze. The beacon was then admired from a small rock that Alistair declared was the true summit.

An easy stroll to High Street (828 metres) took us to our high point for the day, a lady tourist, and a zizz from my GPS as it recorded completion of our eleventh kilometre. 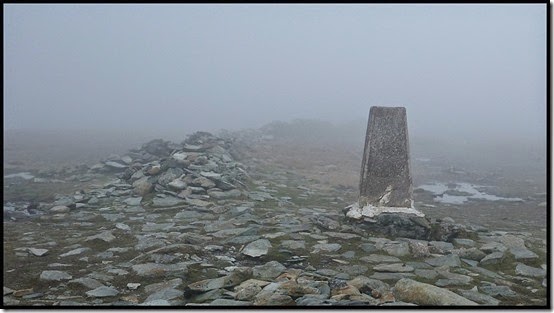 It was cooler here, so we soon said goodbye to the lingering lady and headed off down Racecourse Hill next to a wall. This was the course of the old Roman Road known as High Street, and after nearly inadvertently returning to Thornthwaite Beacon we recovered our composure on the good path to Froswick (720 metres), where a couple ran past looking as if they were on a city high street. Beyond this mist persisted as we claimed the summits of Ill Bell (757 metres) and Yoke (706 metres). 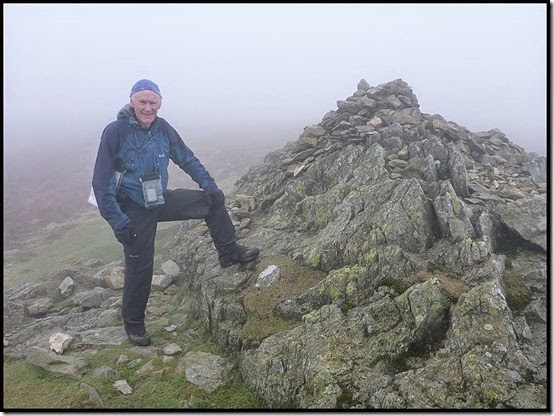 After a break to examine my flask (empty, luckily I also had some water) and enjoy some of Alistair’s jelly babies and Lynsey’s excellent flapjack, we headed past a lone, dripping, ascending walker and down towards the Garburn Pass, hopeful that at last we might gain a view. Our hopes were not in vain. At between 500 and 600 metres the breeze stiffened and the cloud base suddenly lifted above us to lurk thereafter at around 800 metres, leaving us with good, if rather dull in terms of light, views along the length of Windermere to Morecambe Bay. We watched the mist lift from our remaining objectives and relaxed in the knowledge that we’d be able to see clearly where we were going for the rest of the day. 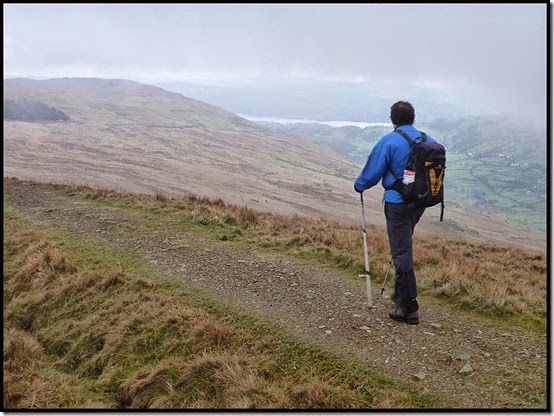 Down at the Garburn Pass two elderly gents were faffing with a tent. “I wouldn’t pitch there” we chorused. Curiously they seemed to be carrying very little equipment other than the tent. Soon we found some red and white tape at our next stile, and realised that the gents must be setting up a checkpoint for some event or other being held this weekend, hence the strange positioning of the tent.

After the company of cawing ravens on the higher summits, the sweet songs of skylarks at the 516 metre summit of Sallows provided delightful entertainment as we enjoyed a further break and admired the views to Langdale in the west and Kentmere to the east. The summits were still in cloud.

A pleasant traverse culminating beside a wall by a small wood marked only on the Harveys map led us to Capple Howe (445 metres), the only one of today’s summits that is not listed as a Wainwright. En route, Alistair rather painfully poured himself over a slippery stile, thankful for a solid post and a lack of barbed wire. 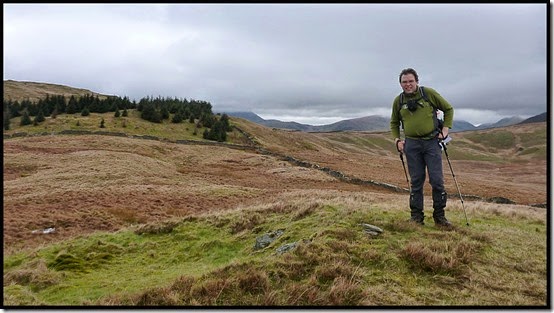 A short stroll over close cropped grass led to our ninth and final summit of the day, Sour Howes (483 metres), where we ascended a selection of grassy knobbles, all of which appeared to be contenders for the highest point. A nice little hill, though, not previously visited by either of us, with good views like the one at the head of this posting.

From Sour Howes a good path led amiably past meadow pipits and down the slopes of Backstone Barrow on Applethwaite Common, eventually crossing the Garburn Road track by way of dramatic stiles, one of which is shown below. 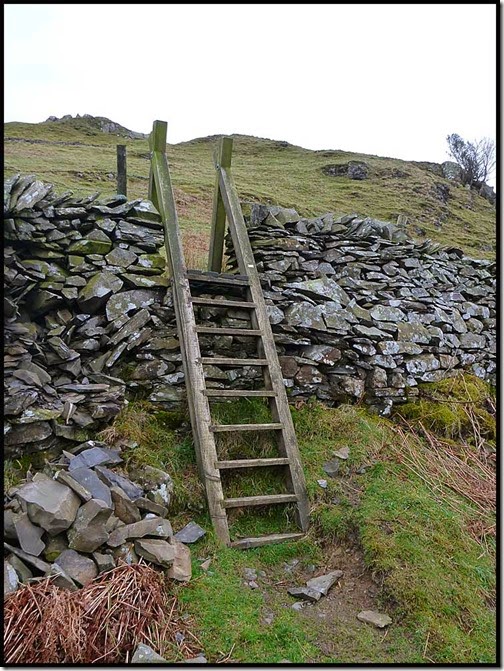 A good track then led back to our parking spot at Church Bridge. Robins monitored our progress and we arrived at 6.20pm, after a 24 km outing with around 1200 metres ascent, in a shade less than 8 hours.

Here’s our approximate route, and there are more photos here. I’m sure Alistair will provide a more accurate route map on his blog in due course. The link will be here. 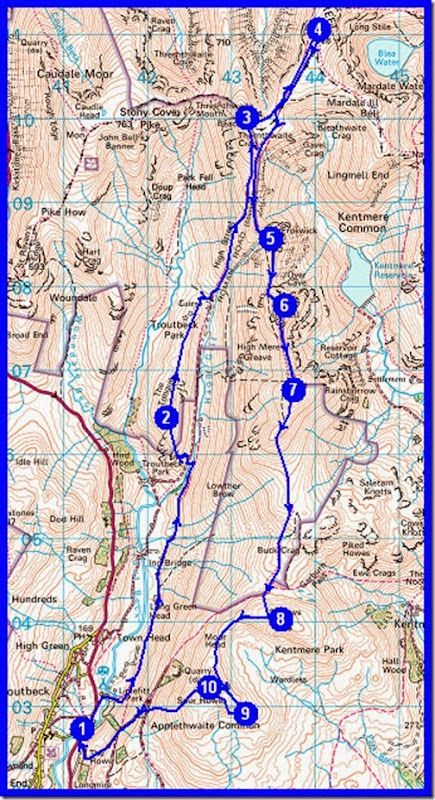 The journey home was very straightforward, punctured only by a stop at Ings for coffee and Calpol, the former of which made a bid for freedom and flooded Alistair’s driving seat. The coffee/Calpol combination proved hazardous and is not recommended! Alistair slowly recomposed himself and deployed his trusty waterproof Harveys as a temporary ‘nappy in reverse’.

Those eight hours on the hill took their toll. I woke on Saturday feeling rather stiff, so a fast Parkrun wasn’t on the cards. Instead I had the pleasurable company of young Joe Evans (11) who paced me round the 5 km course, beating his own previous personal best (PB) by 19 seconds when he finished ahead of me some 24 minutes 40 seconds later. I will never, I suspect, be able to beat my own PB by that sort of margin…

That's a strenuous day - all very familiar territory for me. The last time I was on Troutbeck Tongue we had a total white-out, and then descended into brilliant sunshine.

Haha - we had a 'white out' of a different sort. A nice little hill, worthy of another visit.

Good training walk for those long days to come in May. It's very worthy of another visit Martin and go make it happen.

I agree with all the comments. I do like that area and the bit to the east. It’s stunning on a clear day. Some good wild camping spots too.

Quite a 'trot' you had there Martin. It is a lovely area and one I must visit again soon, alas not on this trip.