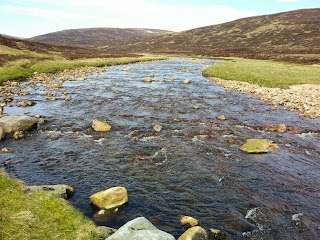 The gentle gurgle of the river drowned any snoring from the Austrian contingent, on a fine calm night that didn't require the tent door to be closed.

The early sun glinted straight into the tent through thin cloud that soon thickened on the cool morning (10C in the tent). There was no rush to start.

Philipp was soon busying himself with early morning chores whilst Markus slept on in his posh red tent. He was just vaguely awake when I left at 8 am, on the long and mainly pathless route to the 'Tarf Hotel' a rather swish mountain bothy situated at NN 926 788 beside Tarf Water. It was a good 15 km of hard graft, according to my knees. Beautiful remote country though with not a soul seen between waving off Mole and Ed, who had pitched camp just a few metres further up the valley, and greeting Andy Wright at the Tarf Hotel. I was only the second Challenger that Andy had seen since the day after he left Oban. His mate - 'Mole' - turns out to be one Jason Cole, who was somewhere nearby.

The early part of the route to Tarf involved a couple of river crossings. On both occasions the slippery rocks dumped me into the rivers, but luckily on both occasions I was able to move quickly enough to avoid wet feet.

It was very rough going as far as a little beyond the watershed near Tom Liath, but as the infant Tarf Water established itself after an area of switchbacks it became easier to stroll beside the grassy south bank. After being surprised by the numbers of bumble bees living in the heather at 700 metres, I was less surprised at the number of plovers and dippers I disturbed nesting on the bank during my riverside ramble, where today's picture was taken.

Eventually the chimney stacks came into view, disconcertingly disappearing until eventually you emerge from the river bank near the front door.

At the bothy I spent the best part of an hour lunching with Andy, during which I consulted my esteemed vetter's notes and decided to cross to the north side of the river here. It was nearly knee deep but not very fast flowing.

And as suggested by Colin Tock (said vetter) there was a vague LRT that made life a bit easier. Half an hour along here I met Gordon Green, who sploshed across the river to greet me. He was heading for the bothy, so would need to cross back later.

After passing a shed on the south of the river, the vague LRT veered away and the route down to the Falls of Tarf was a return to the earlier roughness.

A couple of guys coming up from the falls would be joining Gordon (doesn't he have a tent?) at the bothy. A gaggle of Challengers was setting up camp just near the bridge on the main track up the Tilt from which the falls can be viewed. We chatted briefly. I wasn't tempted to join them so I continued on along - for the first time today - a good path, towards Bynack Lodge.

Tempting camping spots had me thinking. Eventually I succumbed to one. "It's a cracking spot." At least, that's what Mole and Ed said when they appeared as if by magic a few minutes later, just as they had done the previous night. They had taken a high route over the Munros to the north - 30 km with 1700 metres ascent. Quite a day. Mole was cheery as ever, Ed was dead on his feet. They set up camp about 50 metres away.

Clouds are building but it's not a bad evening. I'm in view of the path so I'll close my door tonight.

There's no sign of Markus and Philipp, although I've stopped nearly 4 km short of today's target.

Sent from somewhere not too far from Braemar
Posted by Phreerunner at 10:55