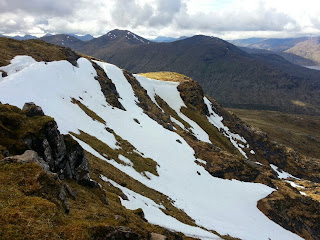 A tough day over very rough ground. Began at 7.30 in mist and rain. It was a shame that the views from the summit of Bidean a'Chabhair (it's the one that looks like Sgurr na Ciche as you walk up Glen Dessarry) were somewhat limited. Care was needed. It was nearly 11 o'clock by the time I reached the Glendessarry path. There were numerous Challengers here - apparently there were over twenty tents in the vicinity of Sourlies bothy last night.

I bumped into a group from Macclesfield doing the Cape Wrath trail, then Jeremy arrived from Finiskaig having descended to the north rather than carry on along the ridge. Jayme and Peter may have done the same - I didn't see them today.

After discussing the Pyrenees with a couple from Sydney - these things just seem to happen - we continued along the boggy but not as bad as usual path to Glendessarry, by which time it had stopped raining and we could enjoy a leisurely hour for lunch.

Jeremy headed off to Kinbreack and I continued down the firm track with Ian and others. We met a Challenger coming up the track - "you're going the wrong way" we jested. "I'm not" he countered,  hastily consulting his map. "Oops" he concluded.

I soon left the main drag to climb Sgurr Mhurlagain and bumped into Jim Taylor, resting on his way over to Kinbreack. "You know I'm ninety one" he enthused, during our long chat.

The sun illuminated the ascent, and it was t-shirt weather all the way, with great views. However, I could see lots of rain coming in, and it was quite late (for me), so I headed down to a likely looking stream and managed to set up camp just before the rain started. Four hours later it's still going strong and there's a red deer outside that seems to want to join me in my dry and cosy home. She's out of luck.

Sent from somewhere in the vicinity of Loch Arkaig
Posted by Phreerunner at 07:57

Memories of my last Munro. Up Glendessary from Loch Arkaig and north to Sgurr Mor overlooking Loch Quoich and back the same a way. A great day.

Sounds magical Martin. Glad the weather is good for you
Sheila