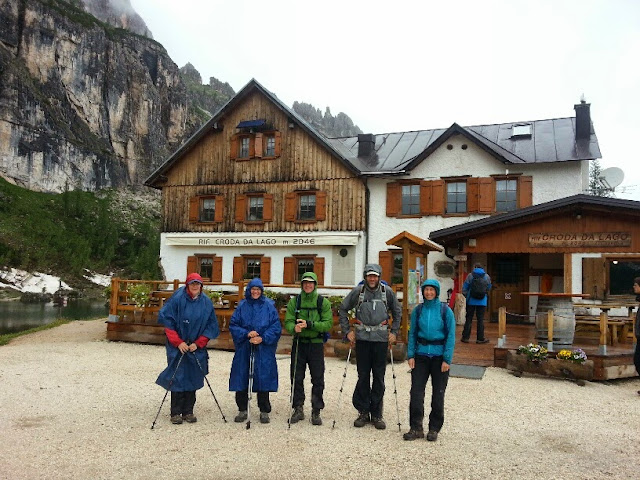 A wet day in the Dolomites.

After a fairly damp day we arrived here soon after 3pm. That should leave plenty of time for blogging, but in a cosy Rifugio full of sociable folk - our own six, the three Johns, French and Chinese couples, etc - it isn't so easy!

The first hour and a half today's walk was thankfully in a pause from the rain that had fallen all night and demanded a dash from the annex to the main building for breakfast.

After a short section on a freshly sanitised pathway, normal service was resumed by way of a steep thrutchy 300 metre ascent to mercifully level path to Rifugio Croda da Lago 'G Palmieri'.

Lunch was taken in this fine establishment as the rain tipped down outside and an elderly group of Japanese tried to commit hari kiri on the welcome grate. Then waterproofs were redeployed for the stroll up to Forcella Ambrizzola. My five companions are pictured leaving the Rifugio. Mike had given up on his brolly by this point.

The afternoon was spent on limestone pavements then mud. A beautiful high level stroll in light rain, followed by a gluey descent to a "cute" (to quote our friends from Paris) Rifugio Città di Fiume.

It's full tonight with just 25 like minded tourists and some Italian scouts who have sought refuge from the rain.

Last night I discovered some wifi, and this Rifugio, despite being quite remote, also has it. Great stuff!

Here's a slideshow for the day (21 images)
Next Day
Back to Index
Posted by Phreerunner at 19:47