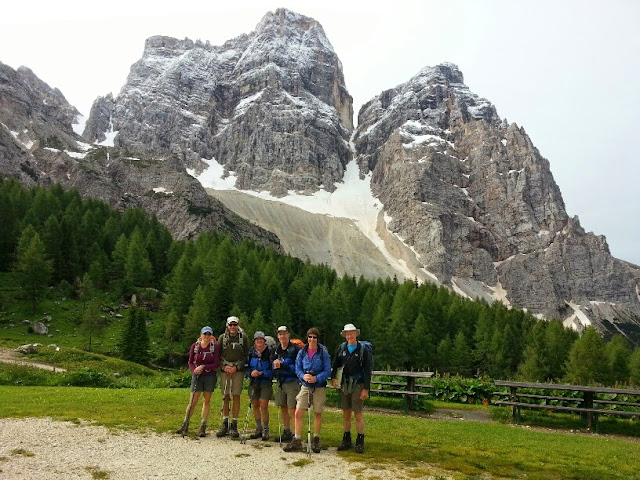 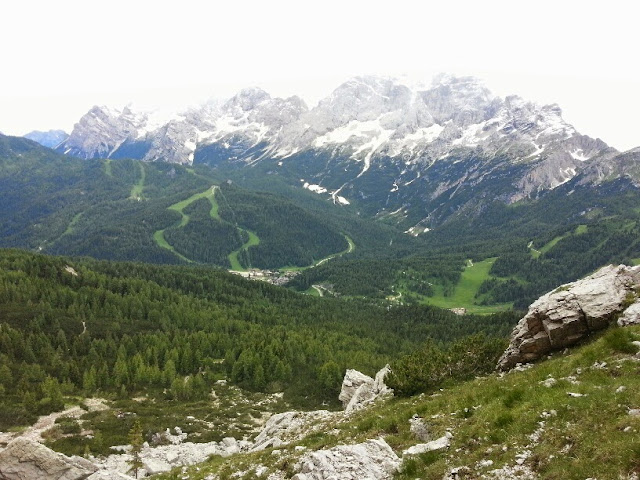 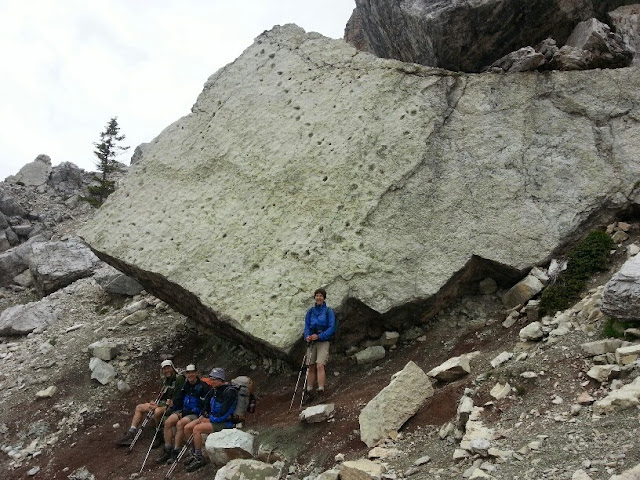 In search of dinosaurs' footprints.

By the time we reached Rifugio Staulanza for coffee we were on Plan E. Plan A, the AV1 route over to Rifugio Venezia, had been extinguished by the dangerously steep snowfields due to abnormal amounts of snow last winter. Readers may recall that we suffered similar problems in the Pyrenees last year.
Plan B was rejected as being too short - the direct route past Mt Pelmo.
Plan C was rejected as being too long - the other way around Mt Pelmo involving a lot of descent and ascent.
Plan D was abandoned due to snow gullies that Karen would have struggled with.


Plan E resulted in an excellent day despite indifferent weather that had us putting waterproofs on and off and trying to avoid the mud.

After the interesting route to Staulanza we headed along the belvedere path, number 472, through much mud, towards Rifugio Venezia. Shortly before Col delle Crepe we headed up to look at the dinosaurs' footprints pictured above. The other pictures show us at the start of the day in front of Mt Pelmo, and the Civetta group from belvedere path 472.

Descending from Col delle Crepe towards Palafavera, we paused briefly for lunch under some pines in light rain. Then it was down to the road and up a jeep track and footpath to reach our destination before 3.30pm.

Luckily, it's another cosy refuge, if rather larger than last night's.

Outside, one minute it's snowing, next it's all clear with distant mountains bathed in sunlight with a rainbow foreground.

The three Johns are here, but the French and the Chinese have gone further today. There are quite a few others here. Showers are good if brief, and we have a room for four and one for two. Half board is €40 for Alpine Club members.

Here's a slideshow for the day (37 images)
Next Day
Back to Index
Posted by Phreerunner at 17:24