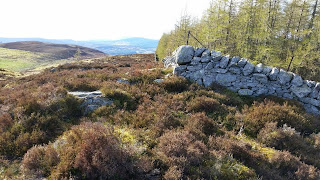 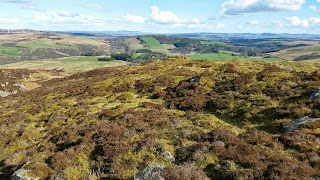 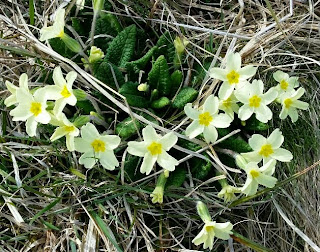 The Hill of Persie rises gently to the left of the A93 road just north of Bridge of Cally. I wouldn't say it's a 'fine' hill, but it provided me with a bit of exercise on a day of 343 miles on the road.
My route card (lost en route so I can't refer to it) said it was a 3 km round trip, but after turning back after 100 metres due to an ankle rub from new boots, my trainer clad feet had recorded 3 km by the time I reached the corner of a wall that marks the summit. It's pictured above.
Conditions were fairly dry, though I was told later that there had been a  blizzard here whilst I'd been enjoying coffee and cake in Dunkeld, from where I'd been commissioned to collect some library books and jewellery. So the trainers didn't get as wet as they had done earlier in Penrith. I had failed to drive past the attractions of a parkrun there, despite a brisk westerly and driving rain. It was probably a mistake to break my journey in that way as I aggravated an old injury that has resulted in a sore buttock and an old man's hobble.
The Hill of Persie brought back to me the vast difference between walks on random Scottish hills and Lake District rambles along professionally manicured pathways that present minimal problems. So on today's pathless terrain, including a hidden 'clash' - a deep gash in the hillside - great care was needed to avoid traps such as holes, bogs, and impenetrably deep heather. The middle picture is a view from the summit.
The wild flowers were in good form today, with lots of primroses (pictured, bottom) and a smattering of wood anemone, wood sorrel and wood violets.
I arrived in Braemar at 6.30 as planned and after installing myself at Thornbank Cottage - thanks Simon and Kat - I soon located Kate at Rucksacks Braemar to deliver JJ's trunk.
Haddock and chips and a pint of Cairngorm Gold, together with excellent bread and butter pudding, rounded the business end of the day at Gordon's.
Posted by Phreerunner at 22:20

Good of them to name a hill after a Man Utd player. Sorry to hear of the foot and buttock problems. Sheila’s just bought a new pair of Merrell boots i think she is saving them for the wedding.

My foot is ok Alan! And I can walk, so it's not the end of the world. I think you maybe need to go and buy some posh wellies for the weeding (sic)!