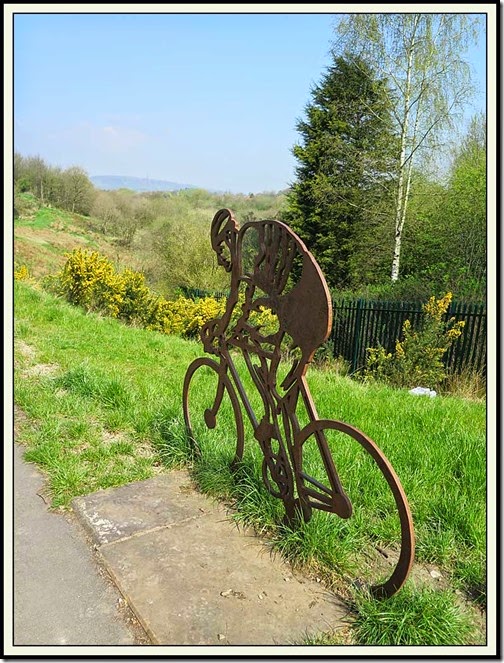 And so it was, apart from the mud. We even failed to miss any turns or manage a ‘Martin’s Meander’ – apart from an enforced diversion due to a path closure.

From Bury Metro terminus we soon found our way past nesting swans to a bridge over the Irwell. Here’s the view towards Bury. All very green and fresh, despite being a few metres from the town centre – but can you spot the shopping trolley? 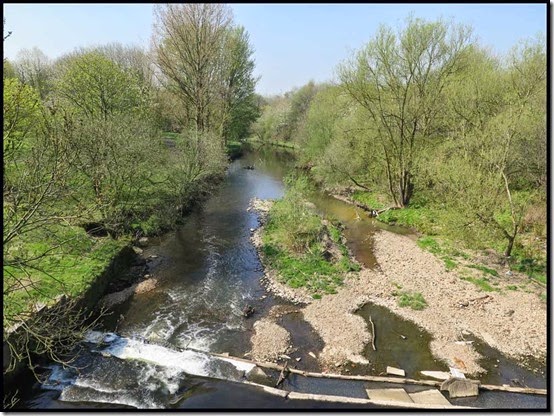 Soon after a tea and cake break by the pedalling cyclist (pictured above) and his two henchmen (Laurel and Hardy), we abandoned the easy stroll along the disused railway in favour of some ducking and diving beside Kirklees Brook. Here’s today’s team, including John’s mate, Les, who hadn’t been for a walk for six months and had been told it would be three miles on the flat! Whatever is the LDWA coming to?! 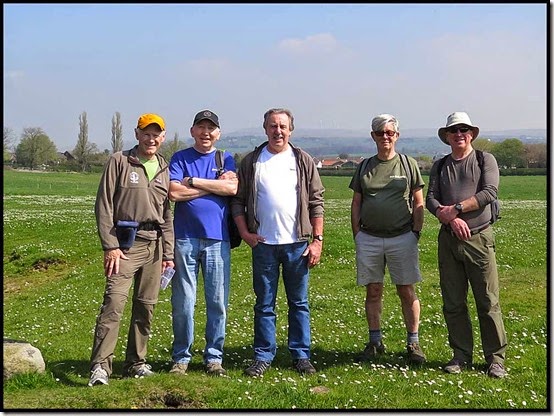 Much to my surprise, we managed to stick to my convoluted plans until reaching a barrier near Tower Farm. Work was clearly under way, so we headed off in another direction. 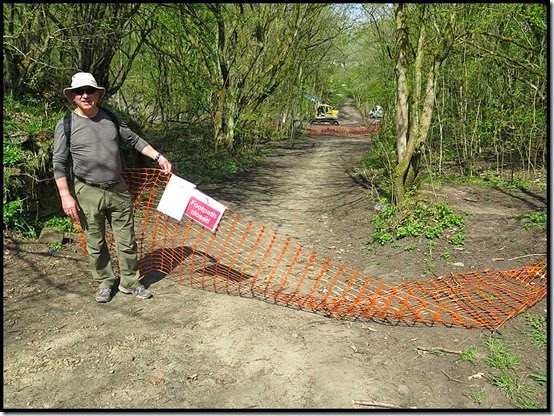 That led to a slither down a bank with good handholds (roots) and a splash across the Brook. I think we all kept our feet dry though, and there was certainly no mud after a couple of weeks of fine weather, though the lesser celandine, butterbur, forgetmenots and other flowers were rampant. 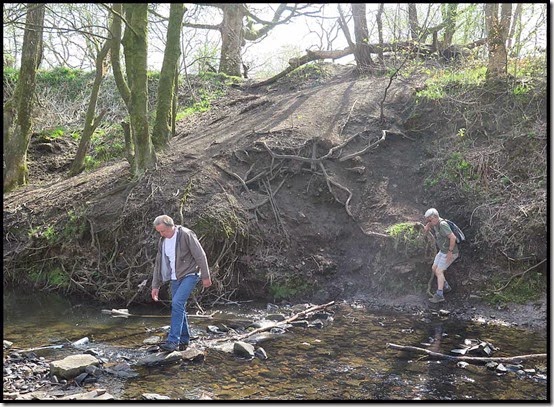 Those of us who take part in the ‘Two Crosses’ challenge walk recognised the view below – the viaduct at the end of the reservoir is crossed near the end of that 26 mile walk. 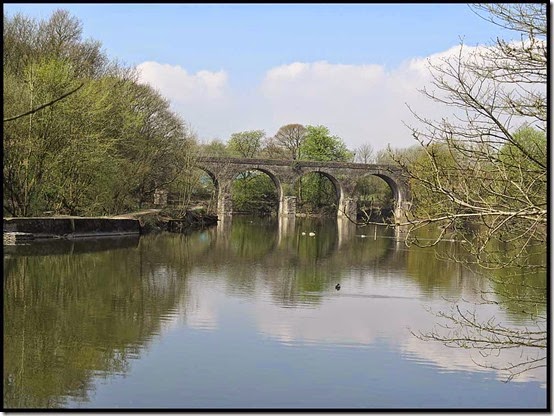 My planned route passed right next to Tower Farm, but the diversion took us a little further from it. The tower looks recently refurbished. 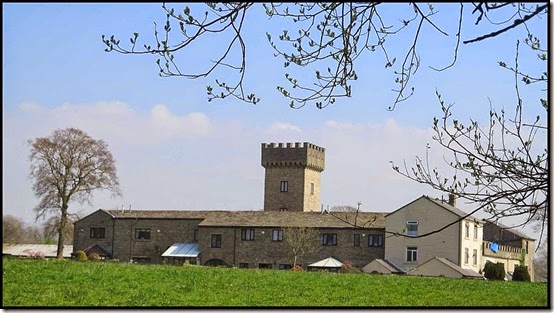 Nearby, an emu seemed to be enjoying slightly squalid conditions. 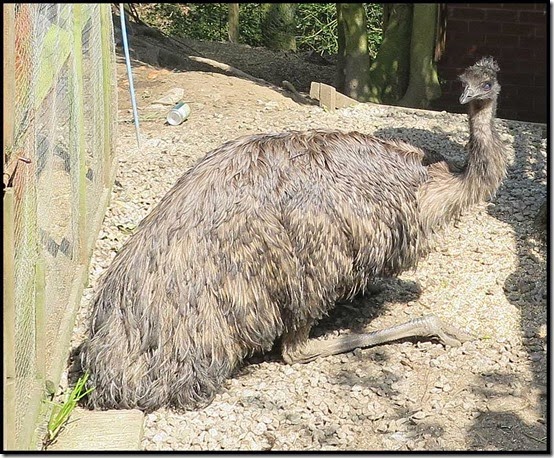 Across the railway and around the golf course at Greenmount, the temperature rose and the Peel Tower above Ramsbottom drew closer. 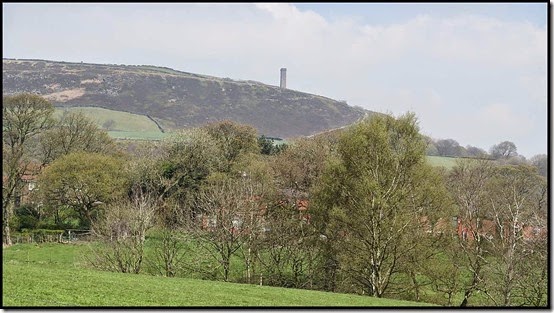 Now we were well and truly on the Two Crosses route in reverse. I hadn’t noticed this when planning the route, so it was rather odd to find we were walking on familiar paths. It was a glorious summery day. 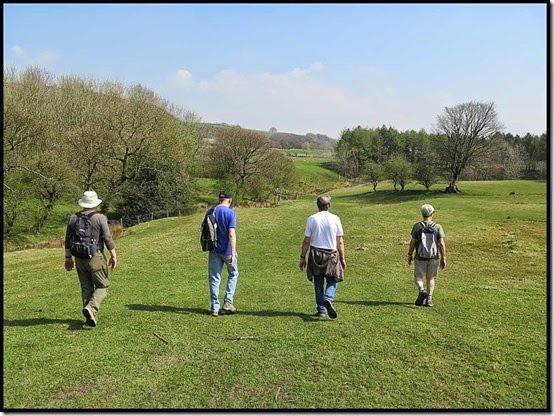 Soon we reached Redisher Vale, where we left the Two Crosses route that descends abruptly down the bank pictured straight ahead. 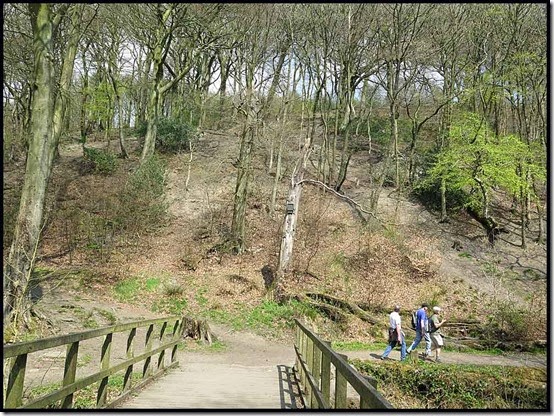 The area is full of industrial heritage. Here we passed a barrier that may have been part of a water power installation. 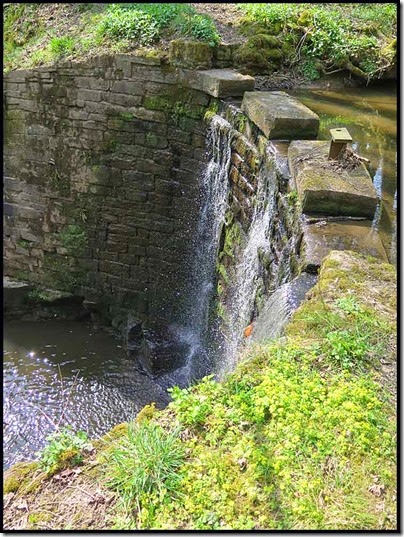 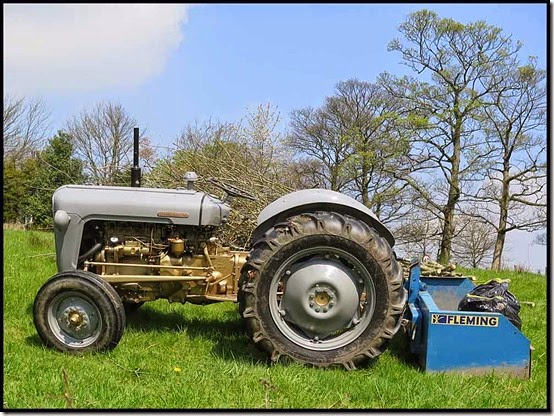 After 10 km and 2.5 hours or so we came upon the Hare and Hounds at Holcombe Brook at 1pm – time for a welcome beer and a bite to eat in the garden, after as pleasant a morning stroll as you could imagine.

Here’s our rather convoluted route: 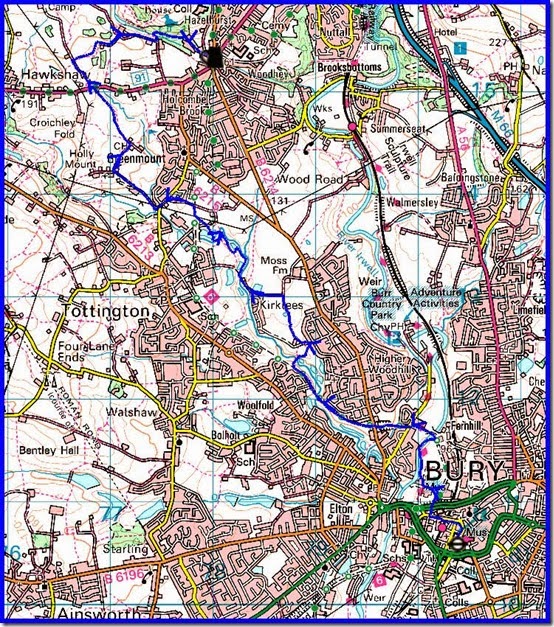 After lunch, the two Johns and Les sidled off, and Alan and I took advantage of the wonderful weather to stroll back down the disused railway line to Bury. 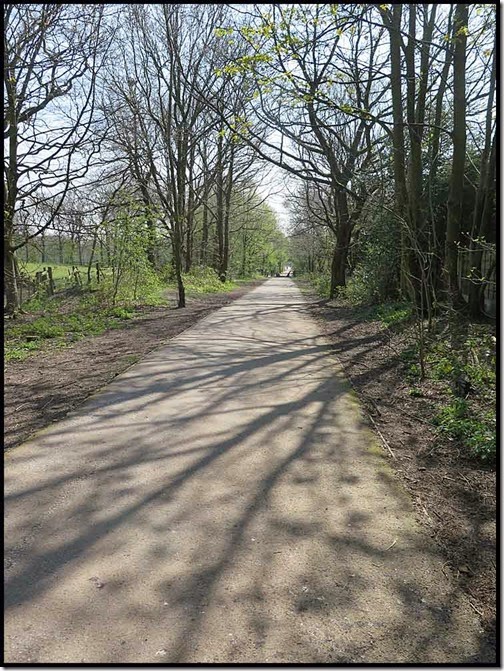 Crossing the bridge pictured earlier beside the reservoir, young mallards were scooting energetically below us – a handful for their mum, and the first mallard chicks I’ve seen this year.

The town centre of Bury had a holiday feel to it, with people lazing in the sunshine near the impressive memorial to Robert Peel. 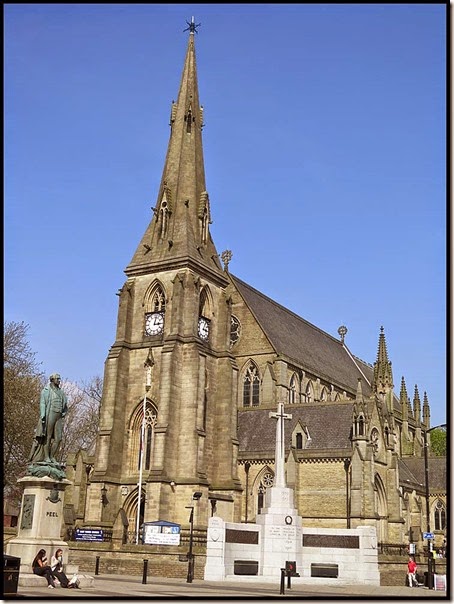 We hastened past, to return to the Metrolink and our tram back to Manchester.

Here’s our 7 km route, taking an hour and a quarter. 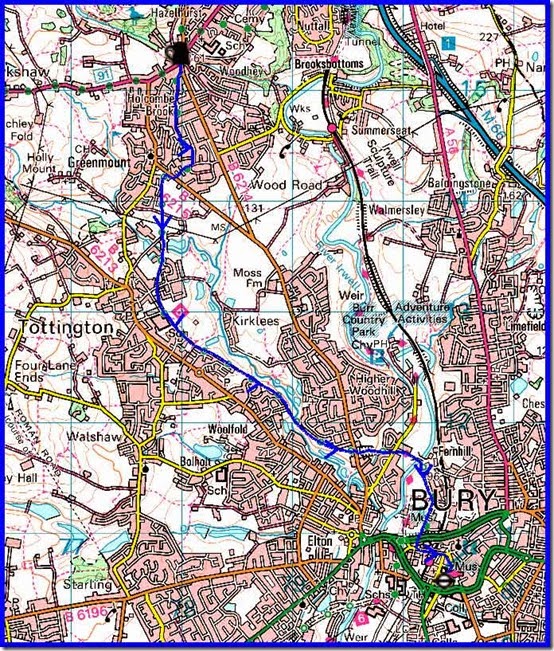 Thanks for your company, folks. That was an excellent little outing.