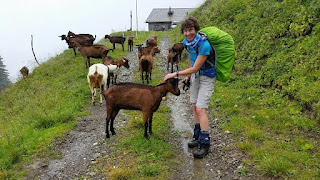 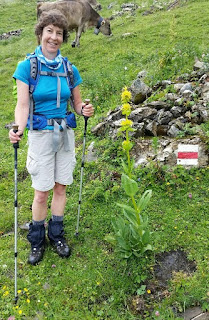 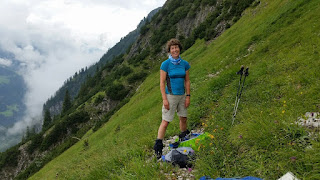 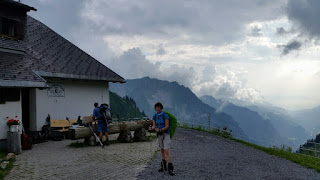 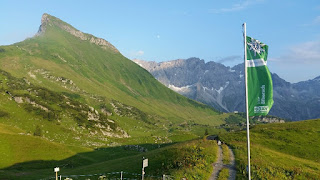 Monday 23 July 2018 - incorporating the second part of Stage 2 of the Kalkalpen Traverse.

This was supposed to be an easy day. Just six hours in our guide book. So we enjoyed a lie in and a lavish breakfast in our excellent accommodation at the Alpinresort. Besides, it was throwing it down with rain outside.

So it was a 9.45 start, with the first 1.4 km on a pavement in an underpass by way of avalanche protection. There's a footpath on top, but today the rain protection was handy. By the time we reached Faschina at the end of the underpass the rain had virtually stopped. However, the cloud was down and we received only fleeting views. Sue befriended some goats. Lunch was taken on the ascent to our high point of the day, Hochschere (2013 metres).

Our esteemed guide book says 'climb a gully ... which is rough near the top'. My own description would be 'ascend over vertiginous ground culminating in a steep gully, with support throughout from stretegically placed wires.

The only other walker seen all day joined us at the Hochschere pass. Sue went a little higher, then we descended what the guide book describes as a 'meander along the Auf der Mutte'. That was a sustained vertiginous path that lasted for about an hour and a half, occasionally aided by wires.

After that the vertiginous ground became merely steep, and only occasionally vertiginous. The sun made a brief appearance and eventually our destination appeared in the distance.

Arriving at 6pm, we found the hut to be full of people - a bit of a shock after seeing only one person all day. Dinner was at 6pm so we sat down immediately in a pre-allocated place after being directed to bed numbers 23 and 24 in a huge attic.

It's hot and busy, but there are some nice views.

Today's pictures:
Sue's goats
Great Yellow Gentian
Virtually flat ground compared with the previous two hours (when I was too scared to take any photos)
Arrival at Biberacher Hütte
A view from Biberacher Hütte

A hurried entry with failing power...

Loving the goats. Loving your tales!

All sounds a bit stressful - was expecting to read of alpine ‚bimbles‘...

I prefer to describe it as 'challenging', Nick.

Humphrey - you'd have loved the piglets a bit further down the path.

Alpine bimbles coming up, Nick, or I'll be finishing up in a box!