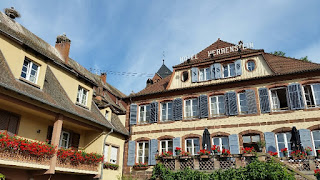 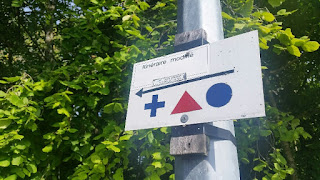 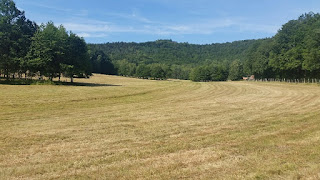 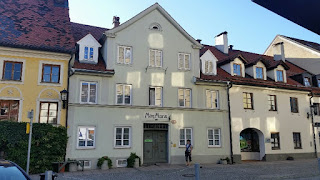 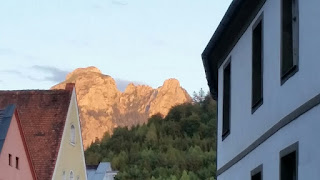 My apologies. Yesterday was not Monday, and June doesn't have 39 days! The pressure of blogging on the hoof must be getting to me. But perhaps nobody noticed these and other faux pas ...

Today we reached the Alps. The last hour or more of our afternoon journey revealed an ever closer arc of high mountains. These are the mountains on the German/Austrian border that leer over the flatlands of Germany. We enjoyed those views a view years ago on the E5 walk from Verona to Lake Constance. The mountains include Zugspitze, 2962 metres, the highest mountain in Germany.

Before all this, we eschewed the lavish and expensive hotel breakfast in favour of coffee and croissants at a nearby salon de té, which trebles as a bakery and post office.

Then we enjoyed an 11km stroll in the woods, on marked paths from the village. A 400 year old oak tree, Gros Chene, with a 6 metre girth and surrounded by foxgloves, was encountered before we rose slowly up winding trails to a sandstone pillar, Rocher de la Guerite.

A little higher, and the Chateau de Hunebourg was encountered. This deserved more than foxgloves... it was surrounded by Mullein. A very private place from where we ambled back to Neuwiller via a hamlet with a barking dog, and a rather interesting spring.

We saw three cyclists and two walkers during the course of this delightful meander along the ● route to the chateau, then the X route back to the start.

We elected for a toll free journey to Füssen, taking a while over the 243 mile journey. But German motorways are toll free, unlike the French ones. So perhaps we shouldn't begrudge having to spend 70 cents to have a wee in Germany whereas in France that facility is free in most places.

Mommenheim provided an excellent purveyor of lunch, in the form of an emporium that doubled as a chocolatier and a salon de té. When we left it was raining. The first rain that Sue and I had seen for several weeks.

The skies soon cleared, and we ate our evening meal outside for the third day running, at the Olivenbauer restaurant; a good salmon pizza and a seafood salad.

We are staying at the Maurushaus, a 300 year old building owned by the same family until 2001, after when it was allowed to rot until Marieta and her husband bought it in 2012. They have made a fine job of restoring the building. Our 'small double' is a lovely large room.

Today's pictures:
1 Hotel du Herrenstein - spot the storks
2 Footpath sign in the Vosges
3 A view from a clearing during our woodland walk
4 Maurushaus - our room is to the left of the ancient front door
5 Proof from the centre of Füssen that we have reached the Alps
Posted by Phreerunner at 21:20

After 3 days on the road you've already overtaken us (day 31 for us today)!

I did spot the '39 days in June' but knew what you meant. I failed to spot the erroneous Monday, but then I seldom know what day it is without looking at the clock. But, talking of typos and autocorrects: have you invested in a Bluetooth keyboard for non-backpacking trips? It was one of the best £15 I spent last year, making me wonder why I didn't get one years ago.

I haven't got one of those keyboards, but I'm a very inexpert typist, so I'm not sure how much difference it would make. I once tried dictation but that was hopeless - took longer to edit than to type an original.

We may have got further than you, but we've seen a lot less!