'Summer in the Alps' Day 4 - to Chalet Roch, Corvara 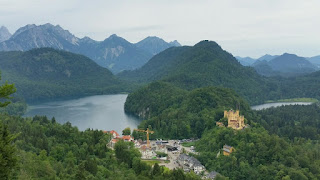 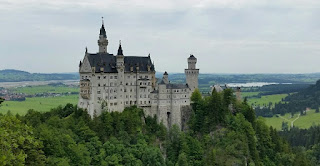 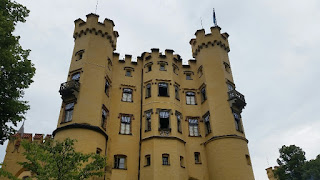 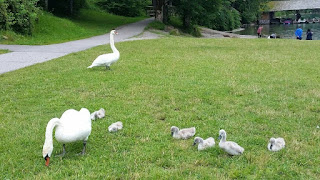 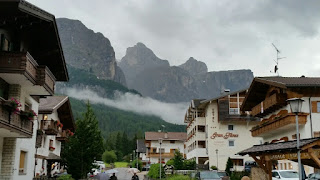 The day started well. Alexander is rightfully proud of his breakfast buffet spread, if disappointed that we didn't want scrambled eggs, which would have supplemented the hard (brown) and soft (white) eggs he'd already provided. He was at pains to point out the roll (and the role) of sandwich bags that he encouraged us to use to insert our lunch, which we were free to prepare from the many items of breads, meats, cheeses and salad ingredients provided. We were spoilt.

First stop was a petrol station. More to buy the Austrian motorway vignette than to top up with fuel. The fine for failing to display a vignette is €240.

Then, on a cloudy morning, we drove a very short distance to Schwangau. The Hohenschwangau and Neuschwanstein castles dominate the scene here. We enjoyed a 6.5km stroll to both these edifices. Together with throngs of a multitude of nationalities, notably oriental. They are remarkable buildings.

On return to the car, a few drops of rain signaled a showery afternoon. We are in the mountains, so mountain weather is to be expected. It's much cooler than if late.

An easy drive to Corvara was punctuated by a coffee stop at San Marco restaurant in Bichlbach, then a pause at P103 (I thought it was 103 metres to the lay-by, but apparently that was the number of the lay-by) to enjoy those carefully crafted butties.

Mountain views were somewhat blighted by cloud, but we arrived at Chalet Roch in good time, to be greeted by Ben from Collett's. The chalet is owned by Petra, and rented by Collett's, whose local team comprises Jack and Janet,  plus Angus, Sandy and Ben.

With luggage for a varied trip, it took a while to sort out our possessions. We are here for eight nights. Another message will be sent to Mike re some books I left at home - he will be asked to bring them when he and Sarah join us next week.

Office hour arrived all too soon. Sandwiches were ordered and we decided on what to do tomorrow. Nine of us then trooped along a damp street to the Hotel Gran Fanes. Here we enjoyed an excellent repast in good company.
Today's pictures:
Hohenschwangau from above
Neuschwanstein
Hohenschwangau from below
Swans near Alpsee
Dinner awaits at Hotel Gran Fanes
Posted by Phreerunner at 21:09