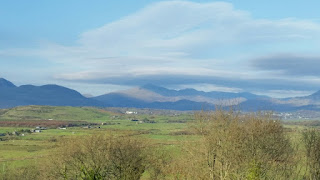 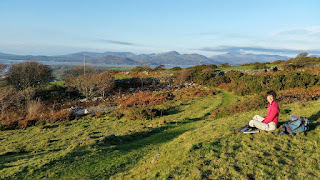 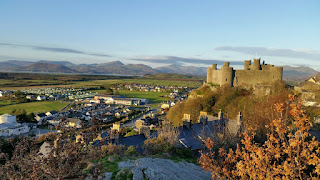 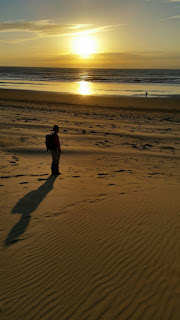 The 'lovely sunny day' continued apace after lunch. We drove down to Harlech and parked in the centre, just above the castle.

Harlech seemed dead to the outside world. I suppose it was lunchtime. In the town's favour are its magnificent castle and its superb beach. Otherwise it seems to be a town of tumbledown hotels and green caravans. Rather an ugly place.

A clockwise circuit above the town soon brought us fine views into Snowdonia (top picture) and along the Lleyn peninsula. Care was needed navigation wise as whilst there were no problems with access, the footpath  signposting could be described as "tired". Once at our high point, by the ancient hut circles of Muriau Gwddelod, we enjoyed a fine view of the Rhinog summits (second picture).

Soon after that, and a bit of 'Martin's meandering', we found another grassy bank on which to empty the remaining contents of our flask down our necks (third picture).

After 6-7 km we found ourselves back in town and heading off past Harlech''s picture postcard viewpoint (fourth picture) on another clockwise circuit, this time based upon the beach, which was bathed in late afternoon sunshine (bottom picture). As with the other beaches we've been on this week, the sand was firm and clean, with no evidence of rubbish being washed up.

By the time we'd walked along the beach, walked through the dunes and the golf course, and struggled up a steep hill to reach the car, we'd walked 10 km. A very pleasant afternoon stroll.

The Thai restaurant that we like was shut despite enticing signs proclaiming that it was open on Thursdays, so tonight's dinner was sourced from the Creel chippie.
Posted by Phreerunner at 21:48