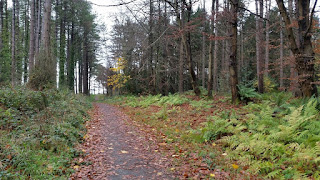 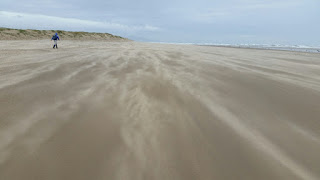 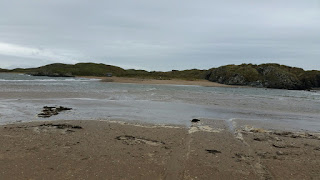 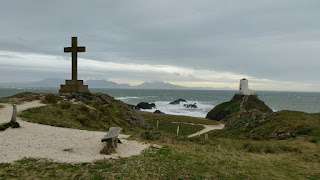 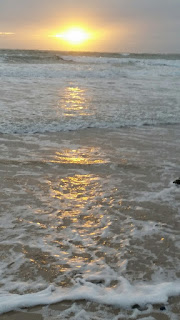 When we walked the Anglesey Coast Path in April we took a short cut to Newborough - for a number of reasons, not least to evade a bout of serious exhaustion. This week, given an ongoing unwelcome vibe from the weather in Snowdonia, we decided to complete the missing loop to the south of Newborough.

It was cloudy and windy. We parked by a sculpture at Penras Terrace. The walk was easy at first, through the forest, but then it evolved into a long plod along the beach, with a brisk sandblaster of a wind, before lunch in a sheltered spot as far south as we could get along the headland.

The coast path takes a little excursion to Llanddwyn Island. But the tide was right in so we couldn't get across. Time to find a sheltered spot in the forest and wait. And wait... And wait.

I made a note of some flowers we had spotted:

High tide was at 1.15 pm, but we couldn't get across to the island until 3 pm, and even then the crossing seriously tested our gaiters. Others either got wet feet or waited longer than we did. Today's third picture shows the impasse. Once on the island it was quite interesting, with the ruins of an old church that appears to have been a pilgrimage destination. A huge pile of sea shells was awaiting distribution on the footpaths to combat erosion. The inevitable lighthouse was plonked on a cliff at the end of the island, next to some pilots' cottages that are now a museum (shut).

An interesting place - I'll expand on these brief comments when I write an overview of the trip.

Back on dry land we soon came across some dog walkers. Most people out on the beach seemed to have dogs with them. This particular couple had about five dogs. Not under control. A big black one rushed up and bit me, before trying to take a chunk out of Sue's rucksack. Blood was drawn. Details were taken. Possibly false, as after the incident we thought we recognised the culprit dog. A letter to the owner, who lives in Newborough, not as was asserted in Sheffield, may be in order.

Continuing along the beach, we were lucky to observe a lovely sunset. Then we turned inland along the coast path that runs beside the forest where it borders the sand dunes.

A pleasurable, apart from the dog, ramble of about 18 km. We really would have had a late finish had we attempted to complete this loop on 18 April.

D has gone elsewhere, so thankfully we weren't subjected to another thrashing at cards tonight.
Posted by Phreerunner at 22:08