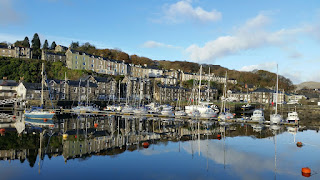 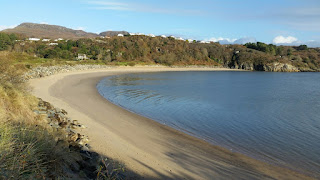 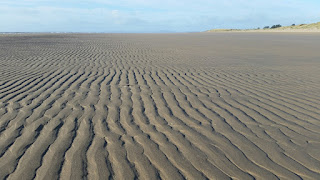 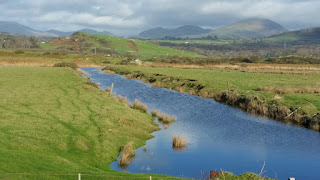 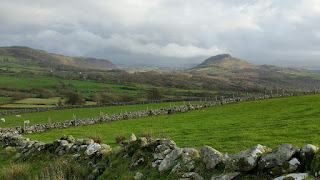 On a fine, calm day, but with low cloud over Snowdonia, Sue and I chose to experiment with a circular walk from home.

We left soon after 9 am, waving 'Good Morning' to D on his balcony before making our way around the harbour to the Welsh Coast Path. The light was great, the top four pictures all being taken from the coast path as it made its way to Criccieth.

En route we passed a wide variety of coastal housing, some with superb plate glass windows and gin balconies. Deserted today apart from a few builders.

The coastal birds were, in contrast, out in force. Sanderlings ran about on the sands whilst oyster catchers looked on, pecking hopefully in the sand. I won't (can't) list them all off the top of my head, but I can believe D, who says that although not an expert he can regularly spot up to 50 bird species during the course of a day in Porthmadog.

We enjoyed coffee and cake at the excellent Gwm y Mor café in Criccieth.  Then we retraced our steps in an effort to join a footpath at SH 507 383. But this is Wales. In one direction a street of housing barred entry to the right of way, and in the only other direction we were faced with climbing a fence, crossing a deep stream, and then negotiating a dry stone wall with barbed wire on each side.

So we returned towards Criccieth and took a quiet lane to reach paths marked on our map but not on the ground. The unsigned paths continued acceptably to beyond a farm at Bryn Braich-y-saint. Here we reached a dead end at a high wall fenced on both sides with barbed wire, through which the right of way on our map marched merrily on. No wonder there was a complete absence of footpath signs.

So we stopped for lunch (important things first!), then after admiring the view (bottom picture) we retraced our steps and took lanes to Pentrefelin. From there a white road took us past Y Boncyn to Coed Bryn-twr, and a right turn down a footpath that led all the way back to join the coast path at Borth-y-Gest, from where we returned home.

By the time I'd nipped to the Spar shop and returned to base by 4 pm, we had covered about 27 km (17 miles). A good day out. D came round later to provide us with a now expected drubbing at cards. Apparently he had dodged some heavy showers that hadn't reached us just a short distance away along the peninsula.
Posted by Phreerunner at 21:13

I have started carrying barbed wire cutters. I am not advocating wholesale use but where a public right of way has been obstructed I have no conscience. I have used them once.. If appropriate the cut ends can be tied back together again with some paracord, so no real harm done.