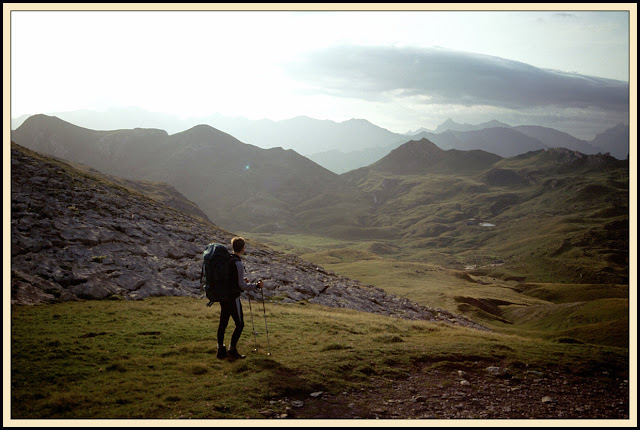 Sue and Martin's Big Adventure
Day 14 - Sunday 8 August 2004 - Stage 12
Postcard Summary
camp to Candanchu
Another great day with eagles soaring above.  First bath for 2 weeks! – 7.5 hours, 17.5 km, 550m ascent
Another beautiful day – this time with no threatening weather!  On a gentle descent after leaving camp, we passed farms high up, with their sheep in enclosures.  Had a nice brew near a stream that was too cold even for Sue’s feet!  Today’s climb brought us up to Ibon de Estanes (lake), where families had taken picnics and there were lots of horses.  Then we took a contouring route through the French/Spanish border, with soaring eagles and colourful alpine flowers, to the Spanish ski resort of Candanchu.  After quenching our thirst at a bar we found a hotel and had our first bath for two weeks!  Then we found an excellent corner shop and stocked up with four days food, to get us to Cauterets. 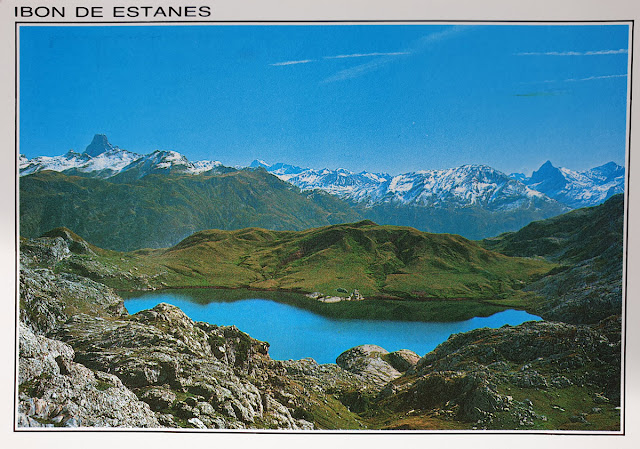 Diary Entry (by Sue)
Today I have the luxury of sitting on a bed in a room for four in the Hotel Candanchu (), albeit surrounded by airing sleeping bags and wet washing spread over the room and balcony. Martin shaves off a 3-day old beard and I look forward to a bath.


Today's stage was from the new book (Ton Joosten's Cicerone guide) - six and a half hours from the refuge to here. The alarm went off at 6.30, but was not heeded immediately. Fine to pack rucksacks outside - a cool 14°C and breezy, but the sun appeared as we packed.

Away at 8 am on a lovely path that descended gently through the Cirque de Banasse.


Several shepherds' huts were passed - today the sheep seem to be in pens next to the huts, rather than roaming the hillsides.

After a little while, legs and fleece were exchanged for shorts and t-shirt. Gradually, the path wended its way downwards, entering the Espélunguère forest for a short time before emerging at the Pla d' Espélunguère, at 1400 metres the lowest point of the day. Luckily about three days of rubbish could be disposed of near here - everything must be carried out, and in general, the hills are pretty clean.

Next to the freezing stream (feet were dipped), we brewed in the shade and snacked on chocolate, and the remains of the mountain mix. The Spanish lads from the refuge last night also turned up and enjoyed a break by the stream. A 375 metre ascent might have been harder but for the shade of the beech forest, as it was steep at times. As the trees thinned, a fragrant orchid was spotted in the grass next to the path. A metal ladder was required to bypass a cave and large water pipe. 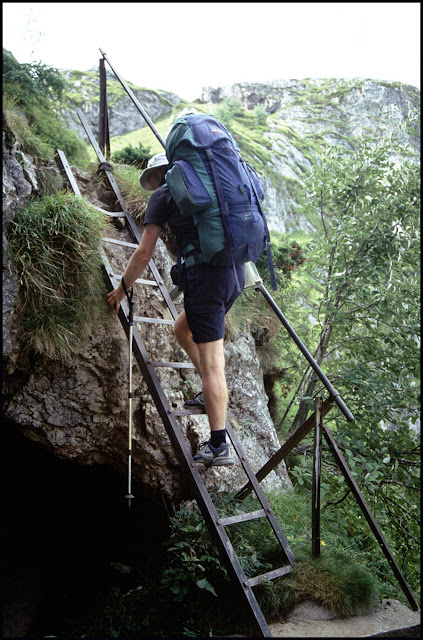 The trees were left and over a lip was the Lac d'Estaëns (or Ibon de Astanes), looking rather deplete of water with a big red beach - it must be used as a reservoir. 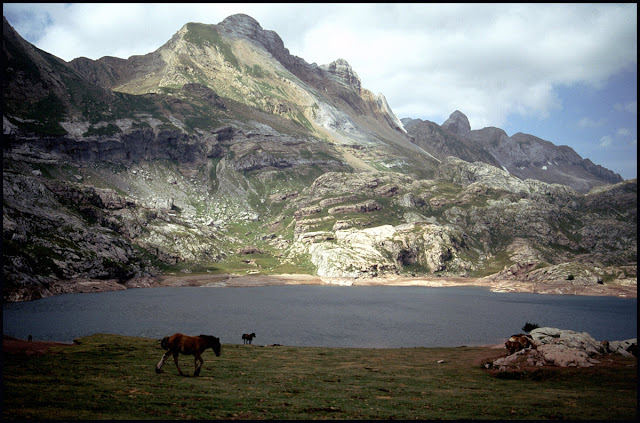 Here, there were a lot of horses, and lots of groups of people on the green slopes around the lake. We too, stopped here for a pleasant but short lunch - Martin's hummock turned out to be an ants nest, necessitating moving. Remains of bread and tins of fish. 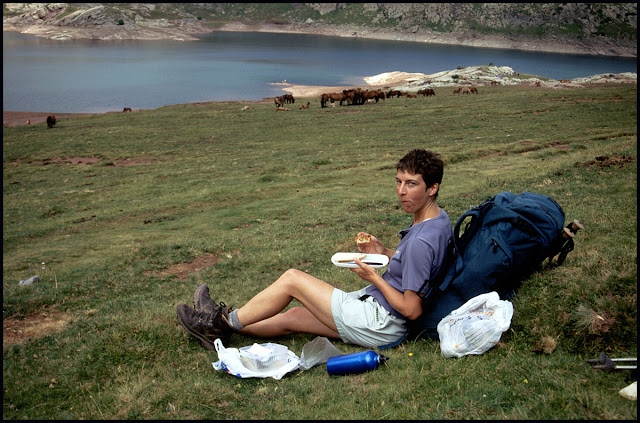 Here, the GR11 was joined and we descended gradually again. We lost the crowds heading to the lake, baguettes sticking out of their rucksacks. By now, it had got pretty hot (31°C) and we both wore trainers.

But, again into forest on a leaf litter path that undulated and twisted around rocks and tree trunks. Emerging from the trees, we could see a large group of people snaking along a narrow path across steep scree - our next objective. Luckily they were across and grouped by the Aspe river, so we didn't have to pass anyone. It was fine, except for one very narrow part, with a big steep drop.

After another undulating rough path, the ski lifts of Candanchu came into view and after Col de Causiat it was downhill. 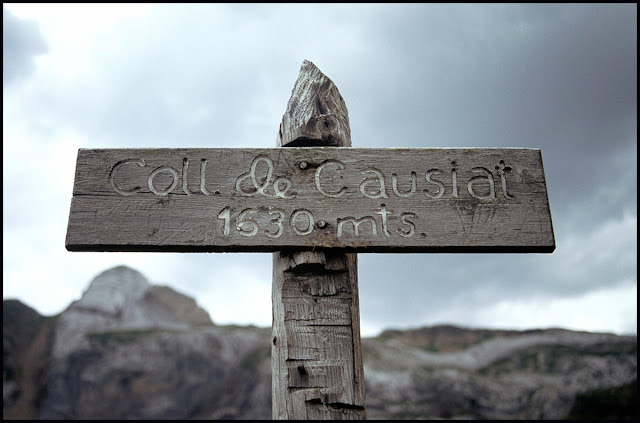 We passed closed lifts to the village centre, and a cold coke at a bar (3.30 pm). 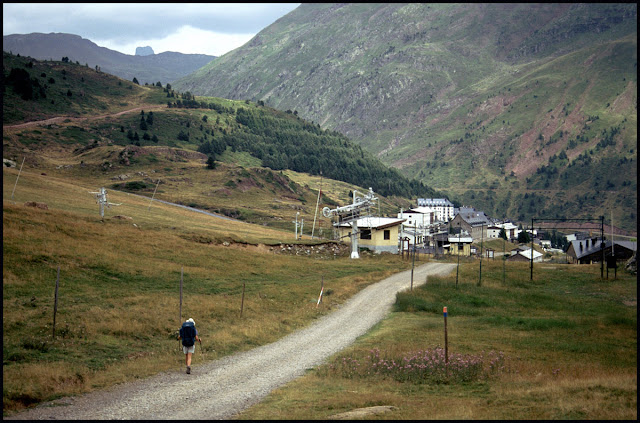 The village is not pretty, but much more attractive than La-Pierre St-Martin. The woman in the bar indicated two hotels, and we booked into the last room here at Hotel Candanchu.

[Note: when Martin passed through Candanchu in 2015, he found virtually everything shut.]

Washing first, then a visit to the Supermercado El Bozo to restock. We managed to obtain everything except dried milk and hot chocolate sachets. The helpful man was ready to pack cheese, tomatoes and peaches for us, and even to supply two loaves of bread (without a reservation!).

A long soak in a hot bath was great, after snacking on a tin of mussels in dressing. Martin spread maps around and I relaxed, before we had a beer in the lounge, preceding dinner. 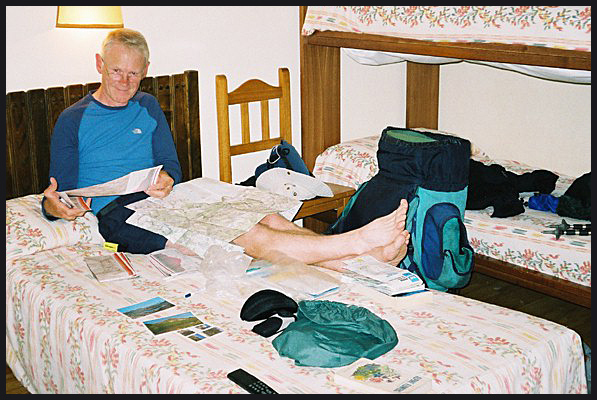 Nice meal, and a bottle of rosé, in the part of the restaurant not occupied by a coach party - they get the window tables.
Sleeping in cotton sheets is lovely! 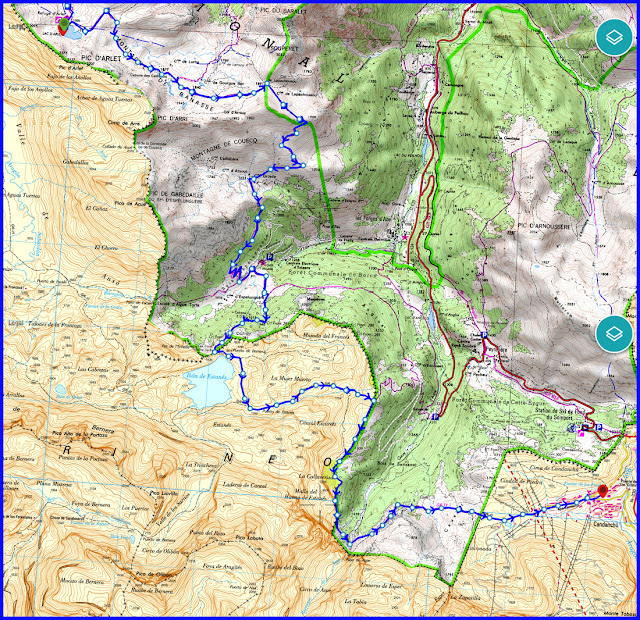 Back to Start
Next Posting
Previous Posting
Index
Posted by Phreerunner at 21:17

This trek goes back to 2004. Do you think if you were doing it today your packs would be lighter? With me ideas on this sort of thing evolve and change. On my last few trips where I have carried a tent and sleeping bag I have kicked out cooking equipment for instance and found I hardly starved.

This was our first long trek, Conrad, involving an expensive visit to Cotswold before we set off. Sue's kit remains basically unchanged, apart from the replacement of her Karrimat with a heavier Thermarest.

I still use the Karrimat, and my current rucksack is similar in weight to the old Jaguar, which I must get repaired (the zips need attention). We still use the stove used for the 2004 trip - without the igniter, which breaks in no time, and I think we have a titanium pan now, rather than the old steel one.

We still do our food shopping at local supermarkets - I've never been a fan of proprietary backpacking products.

I'll include a comparison of kit at some point. It won't show many changes. But I do take your point, and after finding this year's TGO Challenge quite hard going with a heavy load, I may have to consider cutting down on weight in the future.