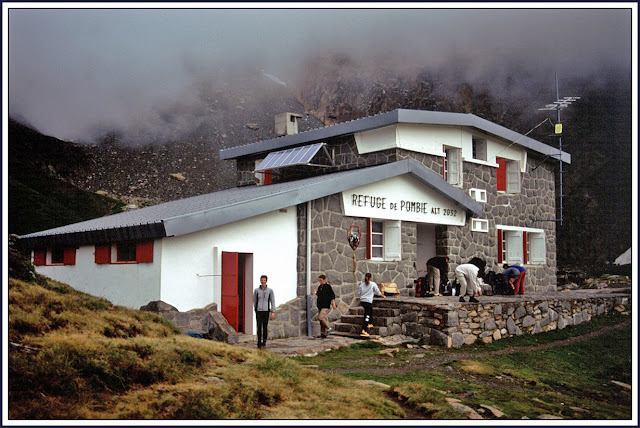 Sue and Martin's Big Adventure
Day 16 - Tuesday 10 August 2004 - Stage 14
Postcard Summary (on yesterday's card)
Camp by hut to wild camp near Refuge de Larribet
Difficult terrain, navigation error, snowfields, challenging – 10.5 hours, 17 km, 1800m ascent (including nav errors of 4 km and 300m ascent)
It dawned cold and cloudy.  We watched a shepherd milking sheep on our first descent.  The route was exciting, with a wired section.  A mistake in going to the wrong col lost us two hours, so it was a tired crossing of two more difficult cols before we set up camp at 6.30pm.  Scrambling with a big pack was hard!  The last low point of the day was burnt soup…..Still, all good fun!
Diary Entry (by Sue)
An exciting day due to the terrain but one with a few low points.
The sun was only glimpsed a couple of brief times - otherwise cloudy. It had rained on and off all night but was not raining when we got up, and didn't rain during the day.
Away from Pombie at 8, to descend from 2032 metres to 1350 metres. Part way down, we stopped to watch a shepherd, seated behind a small metal cage, allowing sheep to stop within it, so he could milk two teats into a stainless steel can. Not every sheep was stopped for milk. 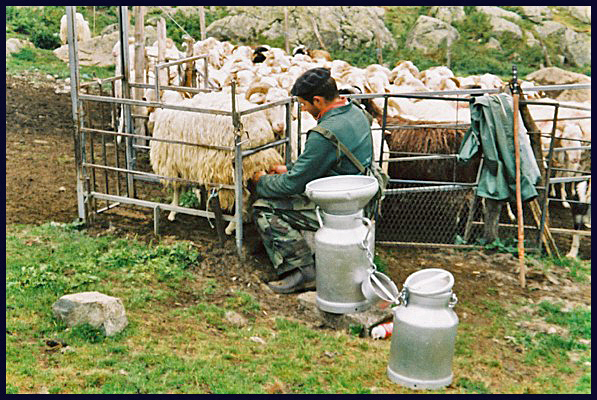 The path led through woods before coming out at a busyish road. At today's low point, (in terms of altitude) we munched new 'mountain mix', made with a variety of nuts from El Bozo (toasted sweetcorn is good!), then started a 900 metre ascent, briefly through woods, then up a valley. A surprising number of people were going in the same direction - it was satisfying to pass several, and before the col, we passed the Frenchman who had left Pombie half an hour earlier than us.

A false col with a stream running through would have been a good place to stop on a nice day, but we continued, as you soon cooled in shorts and t-shirt on stopping. Zigzags brought us to the d'Arrious (2259 metres), and a little further, at Lac d'Arrious, a stop to don fleeces and eat a few more nuts was made. Good time had been made.


The next section traversed a rock face with the aid of a cable (Passage d'Orteig). Martin sprinted on, so our crossing could be achieved without others ahead or behind. It wasn't difficult but the rock was wet from last night's rain, and my hands were cold, despite gloves. 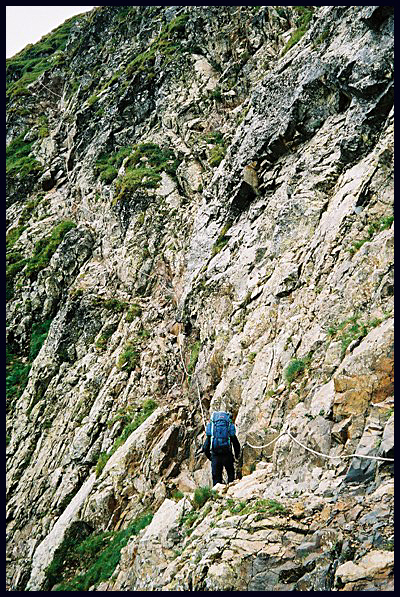 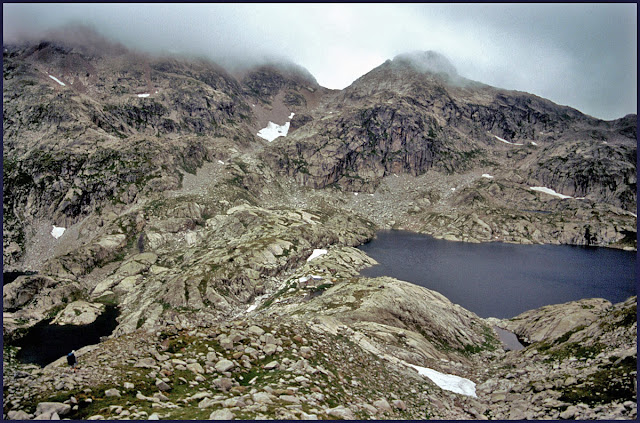 Can you spot the Refuge just below the centre of the picture?

Over boulders, with slight descent to Refuge d'Arrémoulit (2305 metres).

﻿﻿﻿Inside, the shelter is small, with four tables and a sleeping platform for four above, but it is warmer than outside. The walls are white-washed and have black birds painted on them. The bowls of hot chocolate are extremely welcome and it seems acceptable to eat your own lunch at their tables. So, bread and tinned fish it is. Despite putting long trousers on under the table, I am still chilly when we go out to complete the last three hours of the day (or so we think).


Spot first trumpet gentians of the trip outside the hut. We climb around 200 metres to the Col du Palas, on boulders which make it challenging. 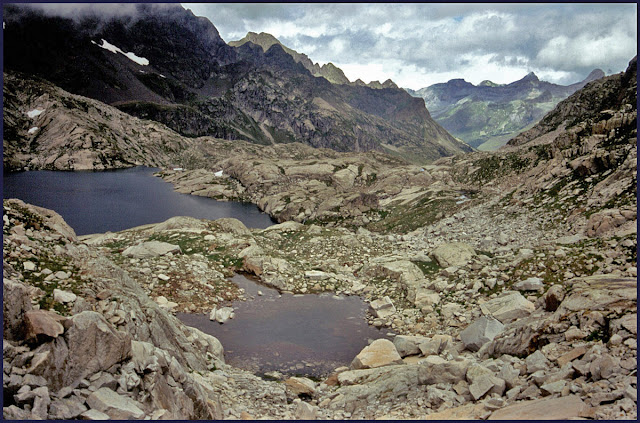 We continue as described in both guides, following tiny , first across then steeply down rocks and grass, for perhaps 100 metres. When the cairns run out the other side of a steep scree slope (from near here the above view into Spain was gained), we decide to retrace as our destination is not clear (it should be a small col). Finally, arrive back at the col - but which col? With frustration, we realise we climbed to the wrong col from the refuge, wasting 2 hours, and climbing 300 metres in the process. So, it's back to the refuge to try to ascend to the correct col, meeting the Frenchman again on the way down.
Eventually, at 3.45 pm, we continue on the three hour route. The 'path' to the Col du Palas was boulders, then a snowfield, then more boulders. This was hard work. But, finally we arrive, with the view behind of Pic du Midi finally clear of its cloud.
The going continued to be tricky, first contouring on a narrow path on scree slopes, then scrambling up rock bands, then crossing three snowfields. 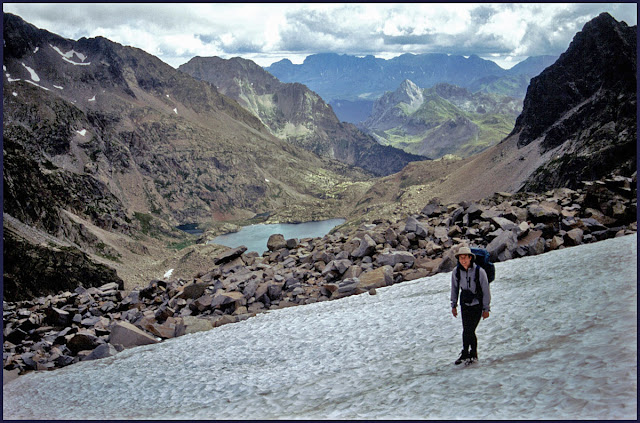 At the end of one of these, my foot went through the thin snow and into a hole went my leg. Very fortunately, just my knee and shin were knocked, and a muscle was pulled. Gingerly, we continued to reach the tiny Port du Lavédan (2615 metres - highest yet) at 5.15 pm. Scrambling is hard with a pack at this time of day.* 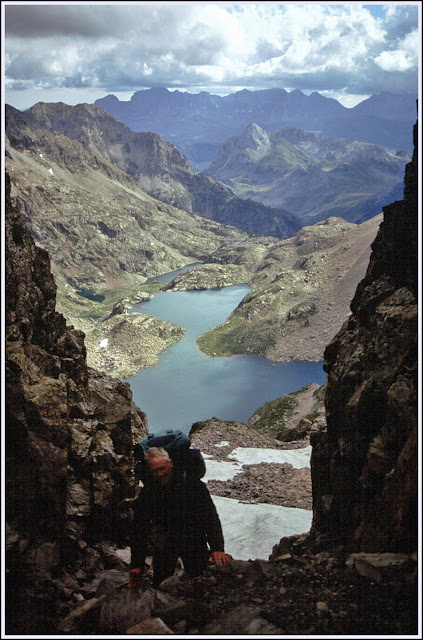 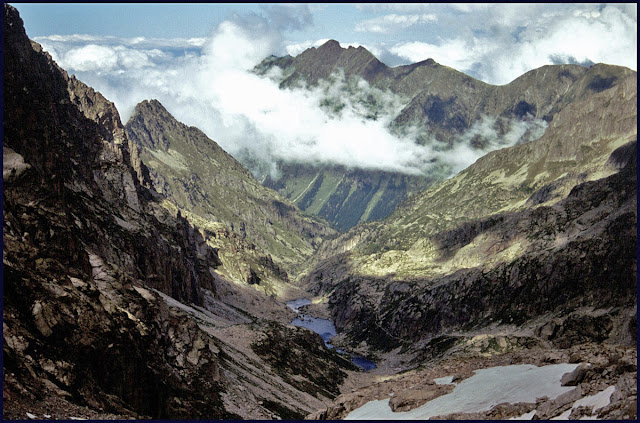 The descent (the two pictures above show the ascent and the descent views respectively) was long, with more boulders and scrambling. Our planned destination was Refuge de l'Arribet, but I was relieved when a small patch of grass near a stream was proposed, about a mile short of the hut, at about 6.30 pm.

Marmots could be seen on nearby rocks. Installed ourselves in the tent, inspected injuries (me), and got cooking (Martin). Asparagus soup (nice but burnt black at the bottom of the pan), pasta with mushrooms and squid in ink, and hot chocolate - the last of the sachets from home.

The sky was clear and the wind had dropped when we cleaned teeth etc at about 9.15. A very bright vapour trail cuts across the blue sky as I write this.

* More recently, in 2011, David Lintern (outdoor photographer and author) made a similar error. His party did not return to the refuge like we did, instead persevering along the ridge and eventually enduring a horrible night bivouacing amongst the boulders.
Stats and route (Viewranger):
18 km, 1800 metres ascent, 10.5 hours (click on the map for a better view)

Back to Start
Next Posting
Previous Posting
Posted by Phreerunner at 22:44

Sue scampered across, and I timed it so that I didn't meet anyone. At least it was 'protected', so we could hang on to the wire. That day had some interesting terrain!

Maybe the photo deceives, but the route to the col looks scarier than the traverse. Any route enclosed by walls gives little chance of escaping rock falls - I’d rather have open ground to cross no matter how steep!

Re Sue’s ruckasack in your previous post: I have a Jaguar 70L in a slightly lighter green. It was always a favourite, but at over 30 years old I’m not sure how reliable it would be now. Maybe I should email Mike Parsons.

The route to the col was certainly very slow, Gibson, but I don't recall any worries about rock fall.

Our Jaguar 65s are both still going strong, though my (probably late '80s version) needs new zips. Sue's is well over 20 years old and still in pretty much perfect condition. They were built to last, and they will last much longer than the lighter stuff Mike P now uses!

I knew I recognised the name of Refuge Pombie, but it's taken me a few days to recall that it's the place where we arrived well before lunch time in a state of hunger (we had underprovisioned or over eaten on the preceding days) and they were kind enough to open the kitchen and cook us a full lunch.

On Passage d'Orteig (where some of the bolts had come adrift, leaving the safety wire lying on the path as a trip hazard) we were blessed with appalling visibility so I didn't have to see how big a drop there was off to the left!