Jack, from SWOG, had kindly arranged this outing many months ago. It's very popular and has to be booked a long time in advance.
Sue and I got the tram to Media City UK on an overcast morning, and crossed over the bridge by the BBC studios in Salford Quays, from which the top picture of Salford Quays was taken. Compare this with the last image from the day, far below.
A bus took us from the War Museum to the Royal Iris's berth, where I guess about 400 people, including 20 or so of our SWOG friends, embarked for the cruise.
It was something of a surprise to bump into old friends, Ian and Caroline, not least because they live in Essex. We spent a very enjoyable day in their company and that of the SWOG contingent.
The cruise took six hours or so over the 35 miles of the Ship Canal plus 5 miles across the Mersey estuary to Pier Head in Liverpool.
Starting through Mode Wheel Locks, we received the benefit of a commentary that was far too detailed to repeat in its entirety here, even if I could remember the content.
However, it was clear that the first bridge was not part of the original canal infrastructure when it opened in 1894 after seven years of construction. This is the Centenary Bridge, opened in 1994 (hence its name), a 'lift bridge', whereas the original bridges were swing bridges. 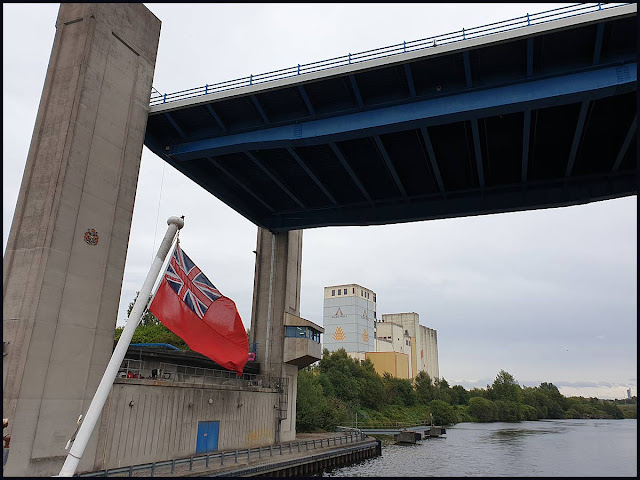 Barton Swing Aqueduct, shown below in the background, and Barton Road Swing Bridge were the next two landmarks where we held up traffic on the Bridgewater Canal and Barton Road respectively. The road bridge is frequently crossed on our bike rides. The Swing Aqueduct weighs about 1400 tons, of which 800 tons is water retained on the bridge when it swings open. It replaced Brindley's original aqueduct over the River Irwell, which had to be much diverted during the construction of the canal. 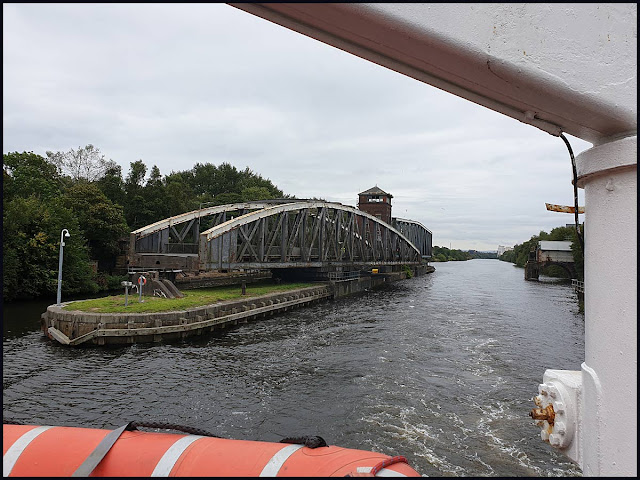 There's a new 'lift bridge' to serve the Trafford Centre next to  Barton High Level Bridge which houses the M60 motorway. These are seen below, looking back from our cruise ship, with the lift bridge still raised following our passage. 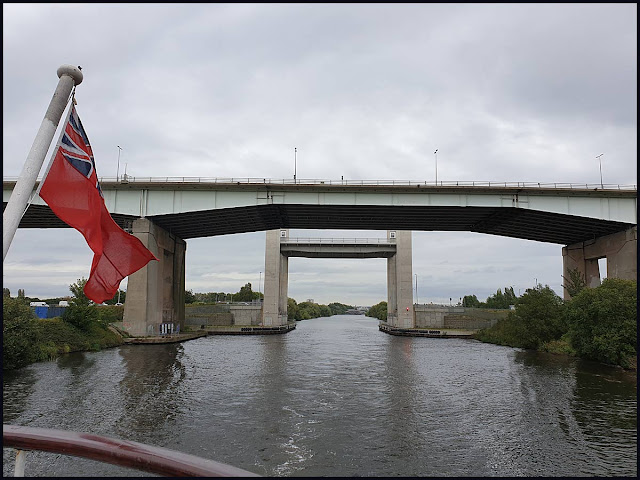 Barton Locks came next - the second of five locks that bring the canal down from 35 metres above sea level in Salford. 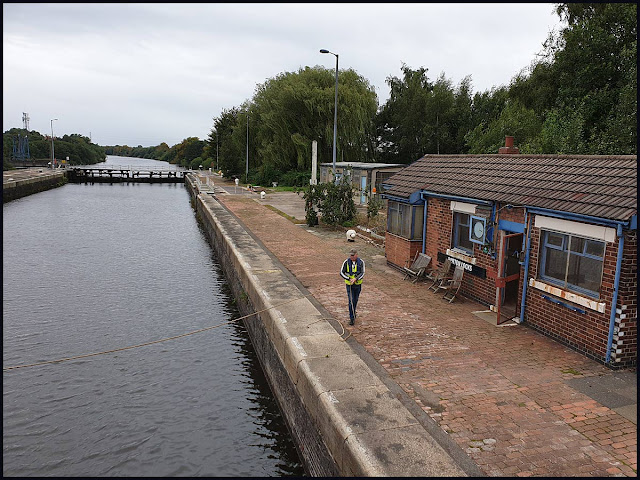 It was quite chilly. I was glad of my down jacket. Here's a group of shivering SWOGgers. 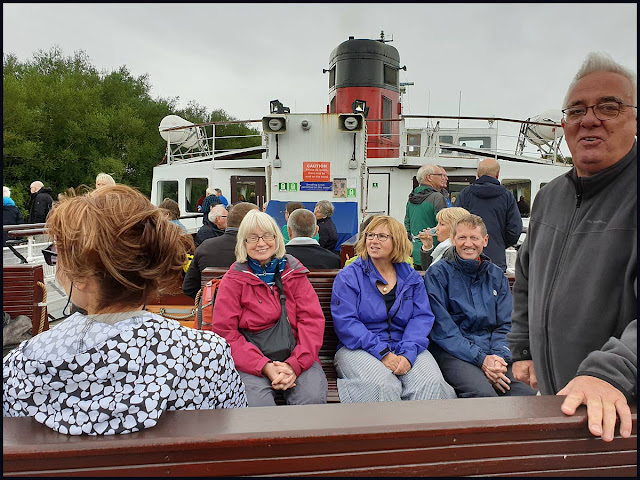 Irlam Locks were accompanied by a spot of rain. We stayed indoors with coffees all round. 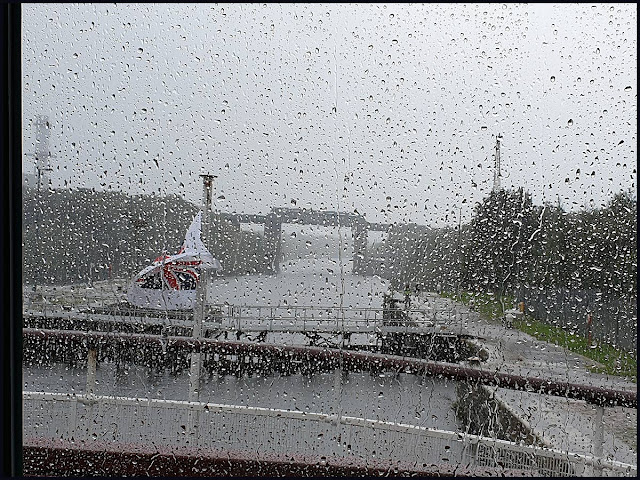 Cap'n Jack was first out as we passed under more bridges, including Warburton High Level Bridge, which currently has a 12p toll, and rush hour queues for those travelling between Lymm and Irlam. 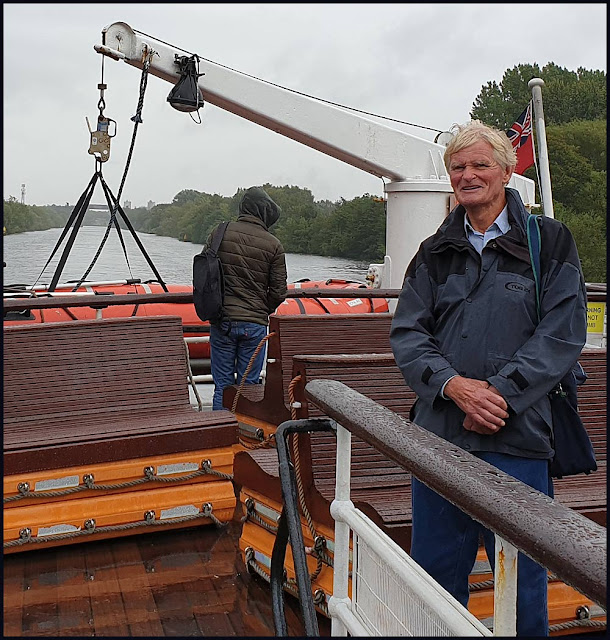 The Thelwall High Level Bridge carries the M6 over the ship canal. When it opened in 1963, at 4414 feet it was the longest motorway bridge in England. In 1995 a second, completely separate, bridge was opened to carry the southbound carriageway. This is 4500 feet in length. The original bridge carries northbound traffic. The bridges are open-sided to avoid snow building up in winter, but that design can have a catastrophic effect on high sided vehicles in strong winds.
This picture shows the two separate bridges that you don't really notice when driving over the bridge. 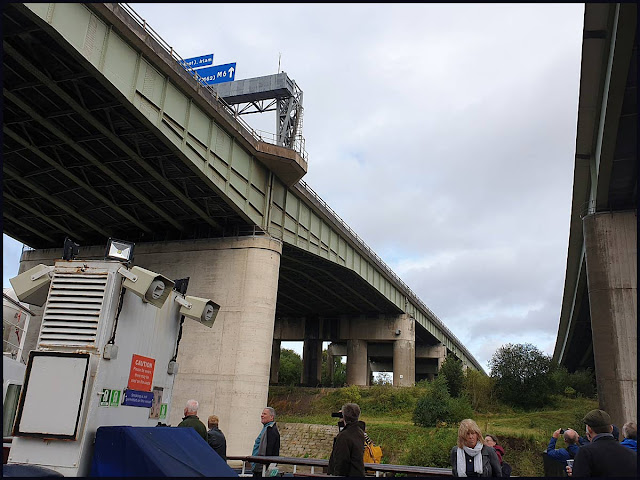 There are several ferry boats that operate for local crossings of the canal. The one shown below is just a small rowing boat. It has to be rowed in a figure of eight direction to contend with the current.

At frequent intervals along the canal are dredging stations. Dredgers operate to maintain the canal, and presumably the dredging points enable the 'dredgings' to be taken to landfill sites.

The sun came out, and we enjoyed more coffee with Ian and Caroline. 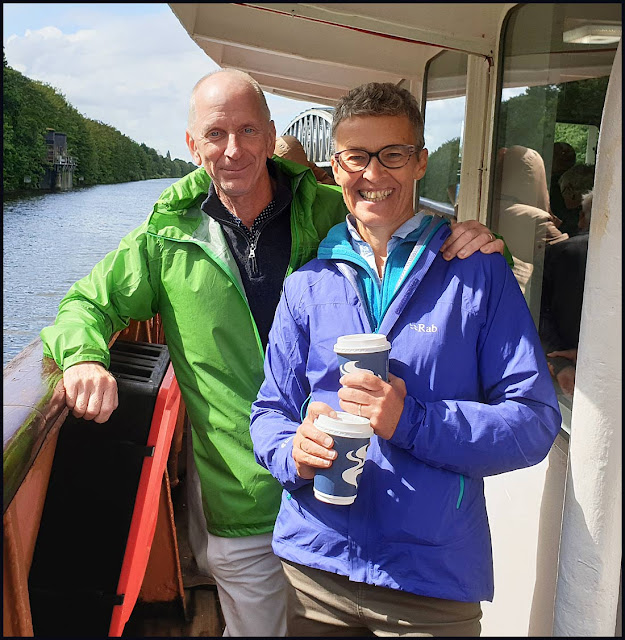 We are familiar with the Moore Lane Swing Bridge, which we cross on our bike rides to Phoenix Park and Norton Priory. 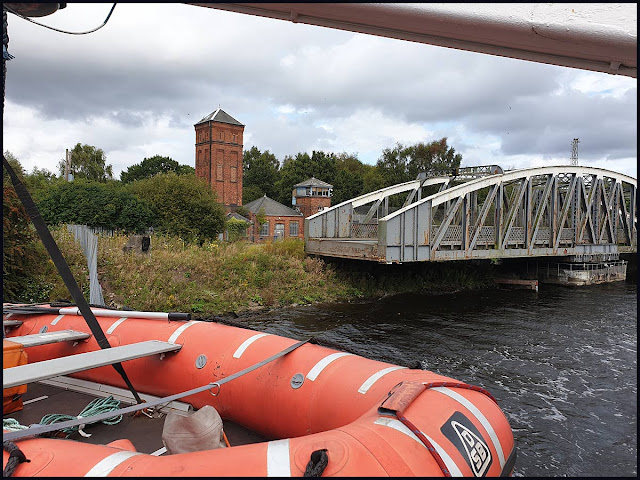 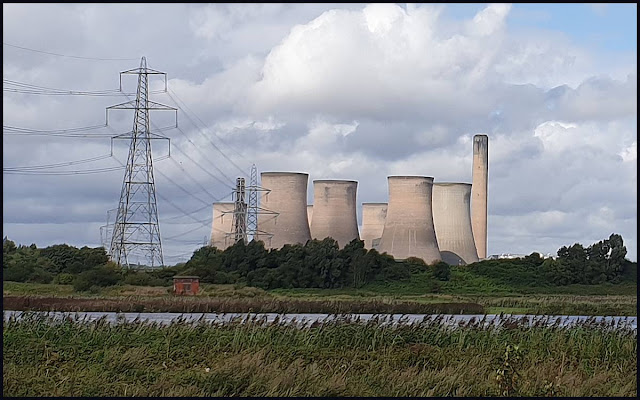 Apparently this old boat, Loach, was derelict until recently. It is now a fully renovated grain barge. 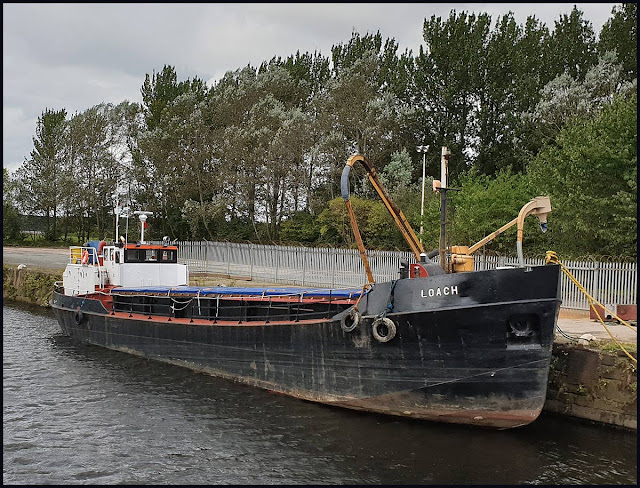 We passed under the concrete carriageway of the new Mersey Gateway Bridge, which was then seen from a distance as it crosses the Mersey Estuary.

There's an ancient church at West Bank, just across the Mersey, which at the time we passed by had a higher water level than the canal. In places the barrier between the estuary and the canal amounts to little more than a watertight fence. Elsewhere, a narrow spit of land allows sheep to graze. As we passed at high tide some of the sheep seemed to be somewhat stranded in the water! 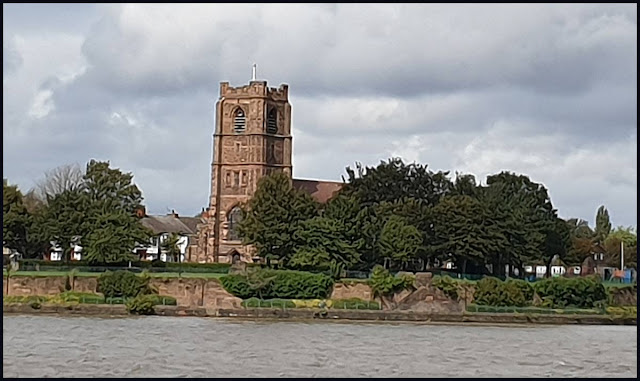 The old Runcorn Silver Jubilee Bridge, in the foreground below, and the nearby Runcorn Rail Bridge, are the last bridges under which the canal passes. The former is now open to bicycles and walkers, with cars etc now having to use the Mersey Gateway Bridge, which levies an unpopular toll charge. 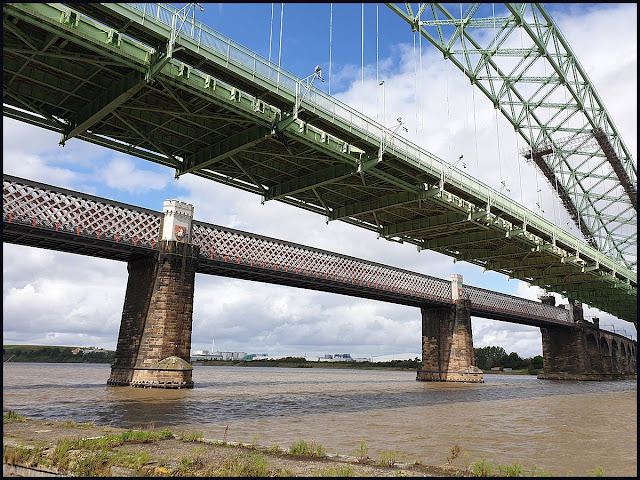 A vast area of chemical works at Stanlow is now passed, and there's a forlorn church building, clearly not used, in the middle of this industrial land. 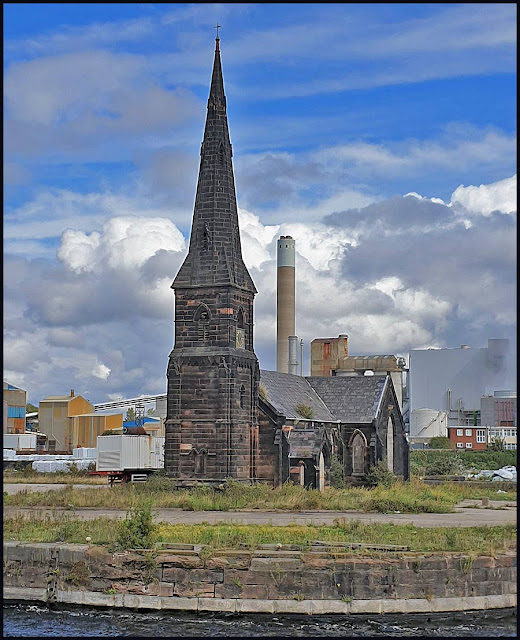 There are thousands of boat movements on the canal every year, mainly at this western end. Here's a gas tanker that we passed. 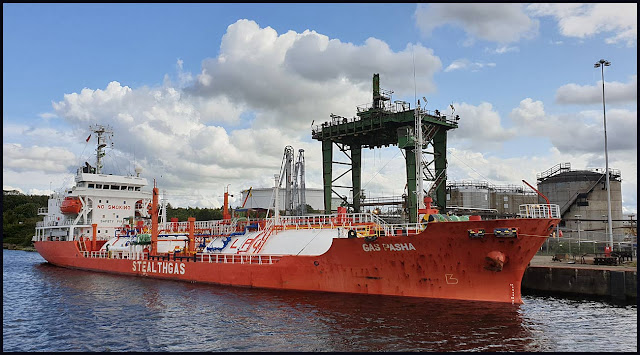 This is just a minute section of the vast sprawl of chemical works and their intricate piping systems.

We were held in a lay-by for this grain ship to pass. The flour mills further up the canal no doubt need frequent deliveries, thankfully not by road. 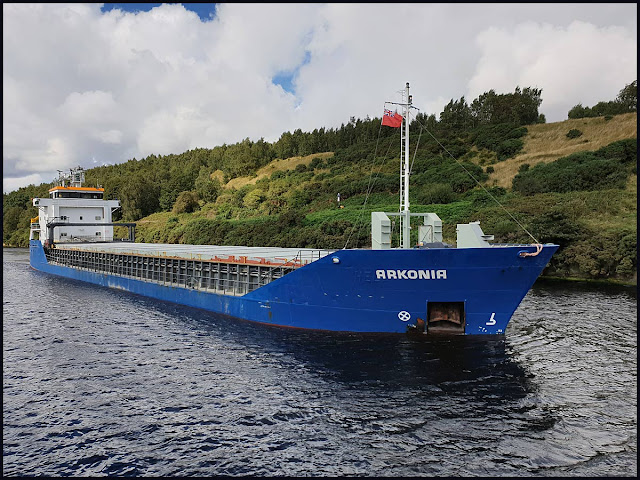 Only qualified pilots are allowed to 'drive' the ships, including ours, on the canal. Bigger ships like the one below, which we met just above Eastham Locks, require pilot boats both in front and behind in order to ensure their safe passage. 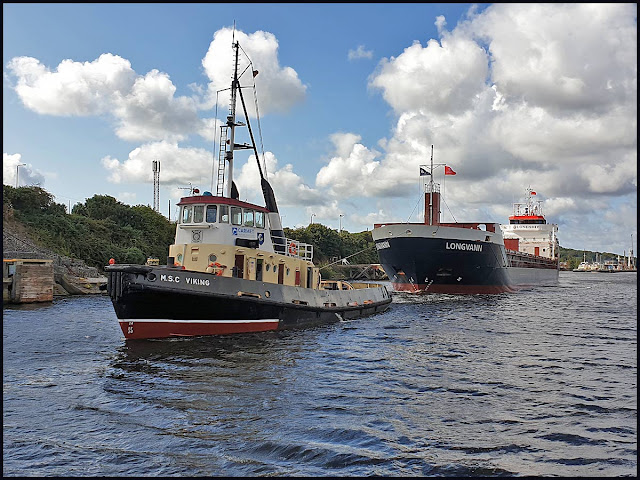 By the time we reached Eastham Locks, the level of the Mersey was lower than that of the canal, so it was a final shift downwards before we headed off to cross the estuary to Liverpool, with the Captain, not the Pilot, now in charge. 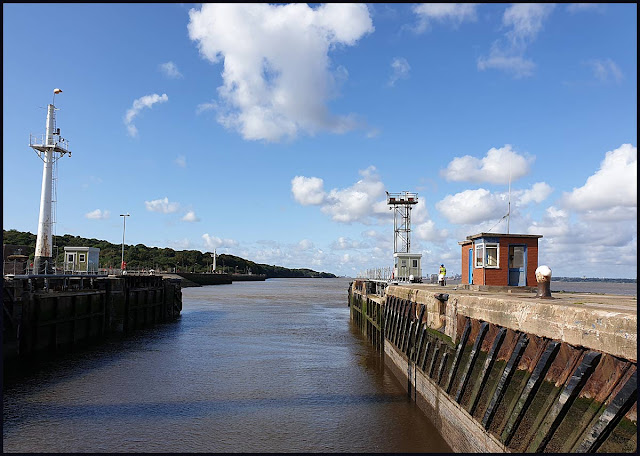 The Royal Iris powered quickly across the estuary, with the Anglican Cathedral and Paddy's Wigwam rapidly becoming closer. 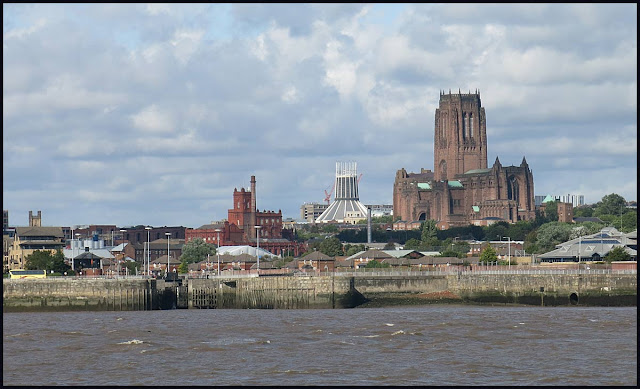 The Pier Head Ferry Terminal, where we disembarked, is very close to the iconic Liver Buildings, in which I sometimes used to work. 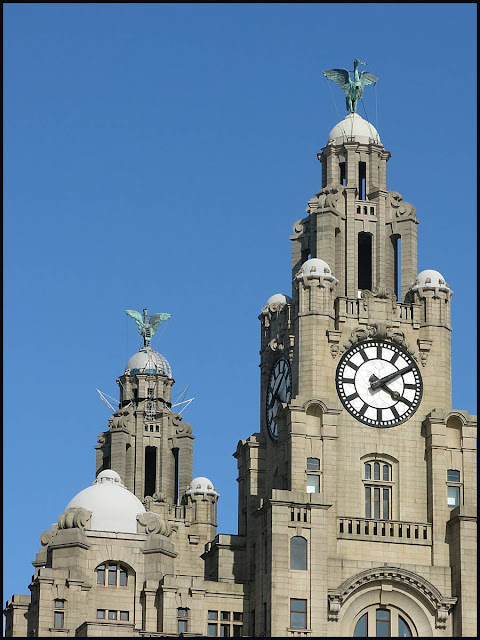 Having dumped its cargo of tourists, the Royal Iris sped off for a well earned rest.

We had a couple of hours in Liverpool, whose sights may one day be ammunition for a separate posting. On this occasion Sue and I walked to the Albert Dock via this 'Dazzle' ship and numerous other works. The dazzling colours apparently confused attacking vessels in the First World War because the direction of travel wasn't clear to the attacker. 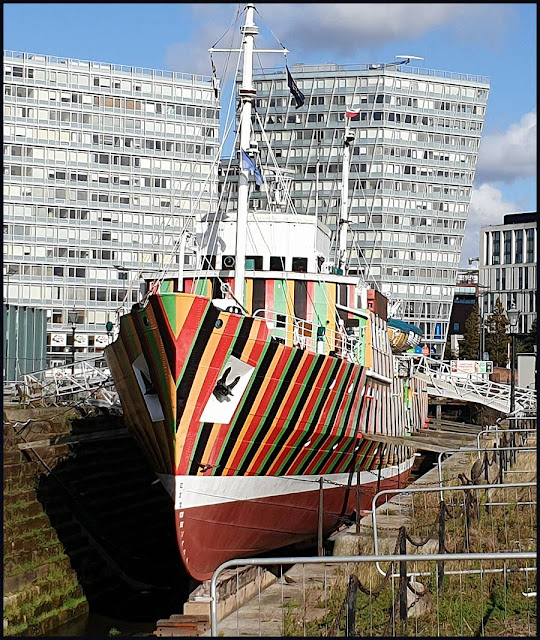 Next to the Tate Gallery, an exhibit. 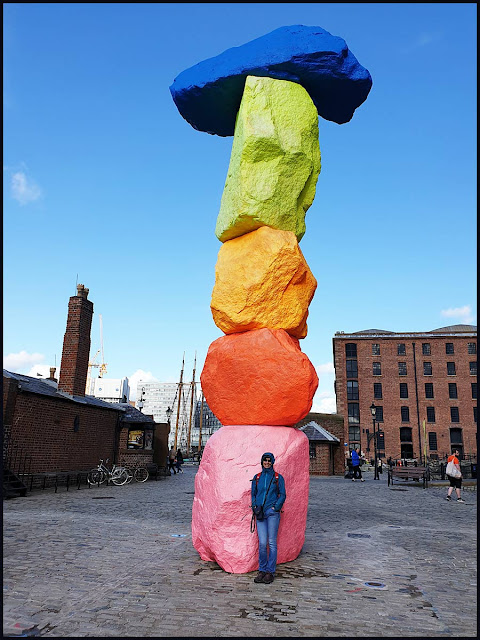 We enjoyed an excellent Thai meal at a restaurant in the Albert Dock. 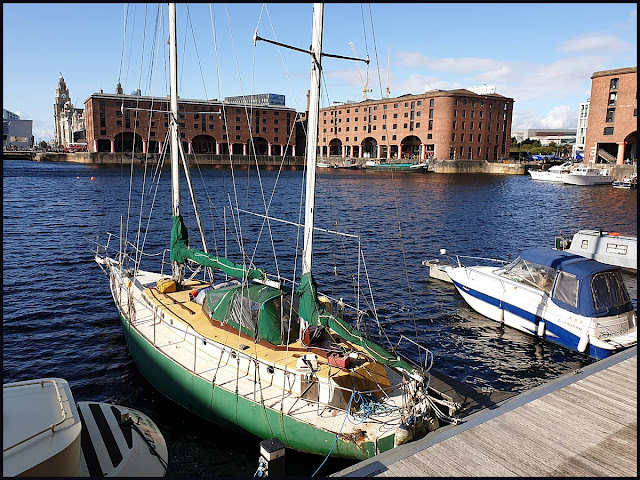 We'd been told the bus that would return us to Manchester left at 6.30, so we were back at the ferry terminal at exactly 6.30, when the last bus left for Manchester. There were five people on it. We had been expecting to find several hundred people waiting for the buses!
Salford Quays were bathed in beautiful evening sunlight when we re-crossed the bridge to return home from the Media City UK tram stop.

An excellent day out, thoroughly recommended. Here's the 40 mile route. 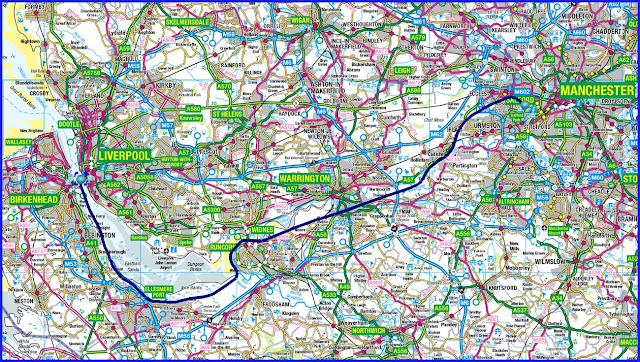