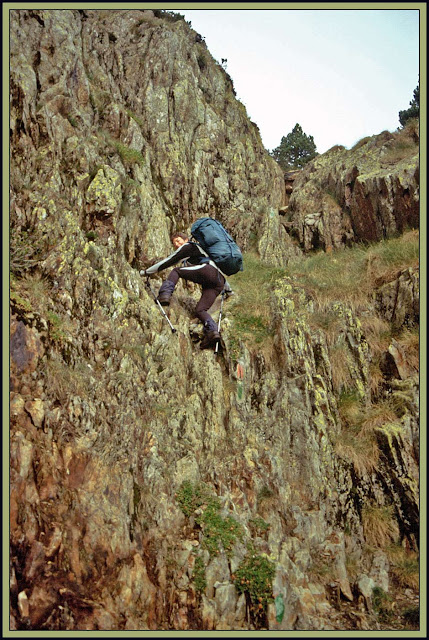 Sue and Martin's Big Adventure
Day 40 - Friday 3 September 2004 - Stage 33
Postcard Summary (on yesterday's card)
Rainbow Camp to Estany de Sottlo
Rough descent by waterfalls, then long climb in cloudy weather to idyllic campsite – 9.0 hours, 13 km, 1000m ascent
Today proved harder than expected.  The Joosten guide book failed to mention certain difficult bits and was inaccurate elsewhere.  But we ended up at a lovely spot after seeing only 8 people all day – we are in a remote area.  Our schedule indicates a possible ascent of Pic d’Estats, but that is not feasible due to the time it would take and our diminishing food reserves.  [And a degree of fatigue!]
Diary Entry (by Sue)
From one beautiful camping spot to another .... with a hard day in between! The morning at '' was silent and still. 10°C. Sleeping bags were packed before eating nice muesli with lots of added bilberries, due to the drops of condensation from the tent roof.
Donned wet boots and gaiters again, to leave at 8.20, just as the sun came up. The morning involved a longish descent, first to the lower Romedo lake, with the first bit of scrambling.
Crossing the dam, we noted that the water level must have risen recently, as there was grass and even flowering plants under water! The descent next to the river with its numerous falls, was rough, and included a short but tricky section of scrambling. (See top picture.) An old cabane was filled with raspberry bushes that provided a ready handful of fruit. 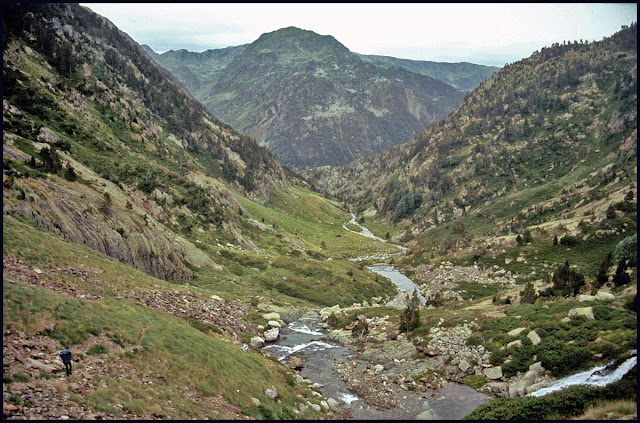 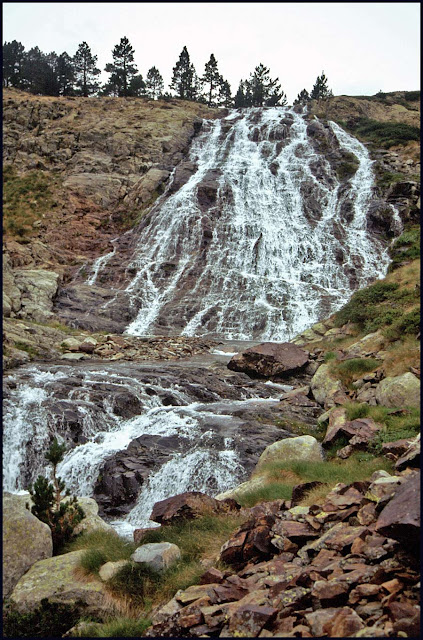 We were sustained by a handful of mountain mix, and the river was easily crossed. The descent continued steeply through silver birch woods. As we and our rucksacks brushed the branches, yellow leaves fell. Finally, at 11.15, the Pla de Boavi came into view. Cattle grazed as we brewed in this flat spot at 1500 metres, in the centre of a circle of rocks. It surprised us (especially Martin who was not hiding too well for his ablutions) to see four people here.
For most of today, the sun has been weak its best through high cloud, although with little wind, the temperature was up to 22°C. Crossing the river after this break required care - especially the long step between two boulders over a deep, fast flowing part. 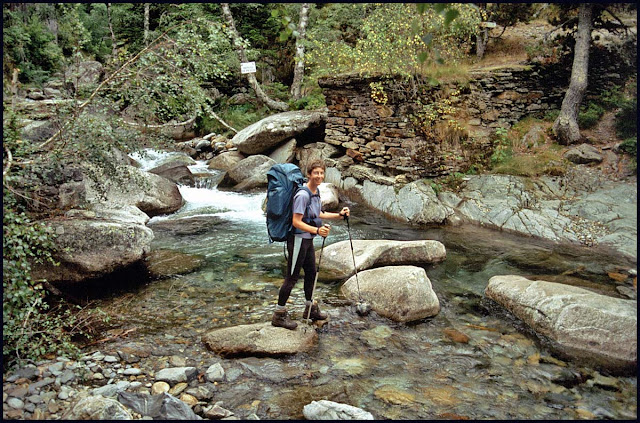 The ascent now started - a track zigzagged through huge pine trees above the river, before a new path above the trees climbed gently up the valley near a stream. The sparse pines left room for laden bilberry and raspberry bushes. Replenished water from a spring just before stopping for lunch at 1.30. No more bread, so we eat tins of fish and chocolate, making more tea to prolong the break! 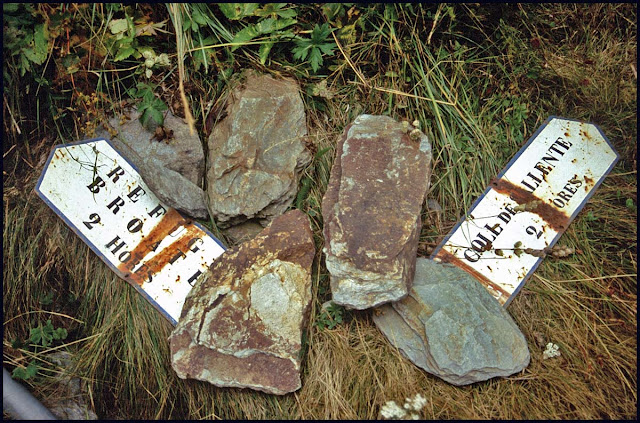 On the plateau were around 50 sheep, including one very thin one with a broken foreleg. They were left behind as the path climbed to the remains of the Refugi de Sellente. Up we went, appreciating the gradient and the as a guide, to reach the wide Coll de Sellente (2485 metres) at 3.30. 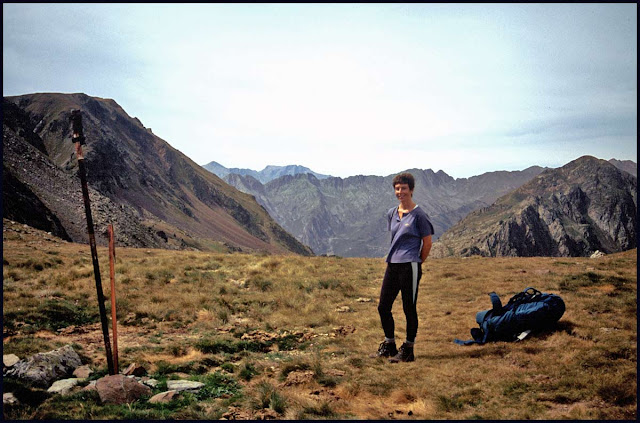 Views back to Mont Roig, and onwards to an orange refuge on a bluff, that we would not be going to. Only one more col to go today, but higher than this one, and the route description in the Cicerone guide was poor. However, a steep descent, and some boulder hopping around a few lakes found us at the next ascent - to Coll de Baborte (4.30).
It was tiring, as this time we climbed to 2602 metres. Now, the sun was shining through the high cloud and there were views of Pic d'Estats (3143 metres) and Montcalm (3077 metres) ahead. 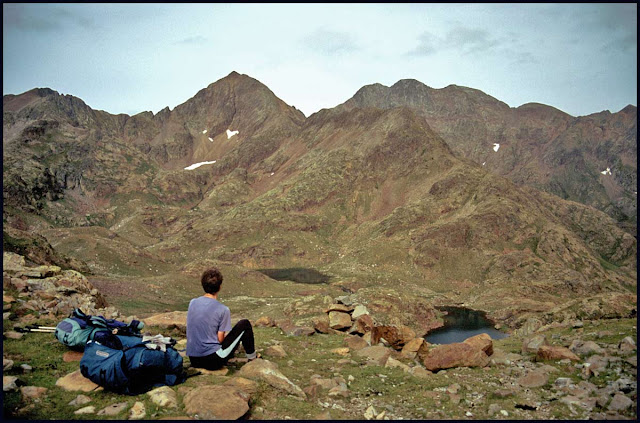 Just a final descent over grass to the Estany de Sottlo, another picturesque lake with pines at one end, where we pitch, at 5.25 pm. (2392 metres.) 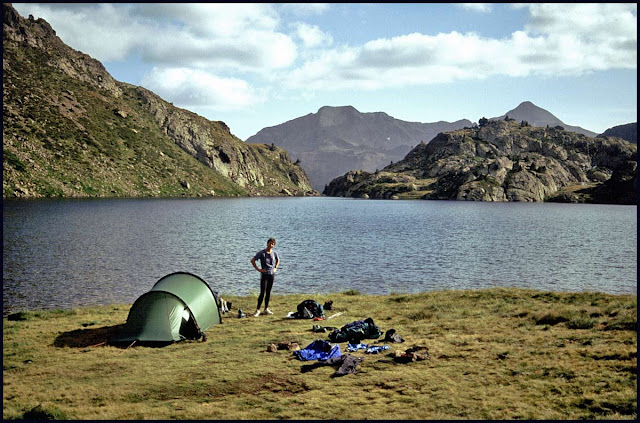 It was good to have a short while in the sun before it went behind the hill, and we relaxed in the tent. Dinner was mushroom soup, three cheese pasta with tuna, and hot chocolate.
Tonight, torches are required by 8.50 pm, despite a nearly clear sky. Only two lots of people seen today, plus company at this excellent bivouac site.
Stats and route (Viewranger):
13 km, 1200 metres ascent, 9.0 hours 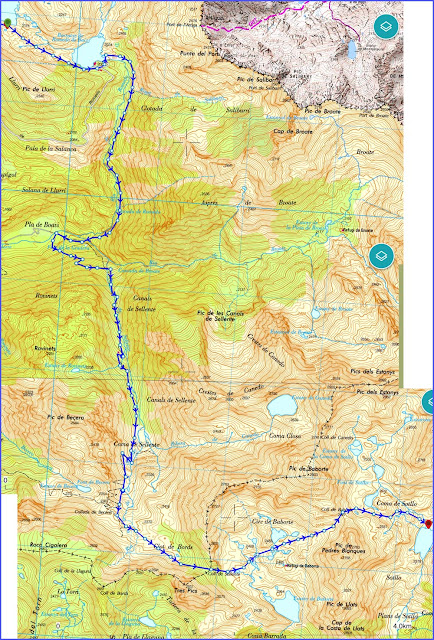 Yes Conrad, a memorable day - one of many that it has been a delight to recount, 15 years later. There will be a break from the Pyrenees soon due to our 'Summer Holiday' finally taking place in early November!